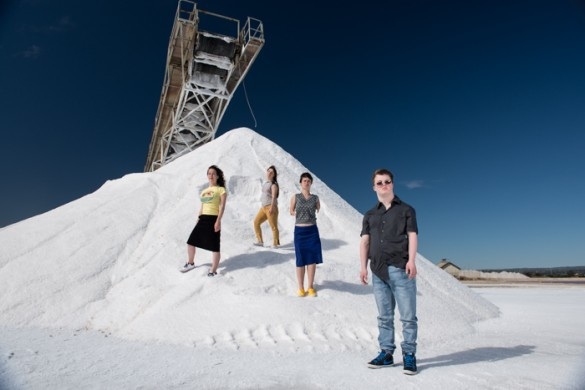 What is salt? Salt adds flavor, salt preserves, salt cleans and sanitizes. According to the Salt Institute, salt has about 14,000 uses. 14,000! No wonder salt is so valuable that the phrase “Are you worth your weight in salt?” was coined.

This month, Restless Dance Theatre presented a dance theatre work all about this white, gritty substance, and Director Rob Tannion asked the audience that exact question. The confronting and unashamed work that unfolded was about people and self-worth. Do we treat people like they deserve? We are all worth so much, but do we realise this? Do we treat people, especially those with disabilities, like they are valuable?

The stage set the scene as soon as we walked into the theatre and the engaging design with a huge mound of salt up against the walls of an old house had my imagination running before the performers even took to the stage. The set design and clever light effects, coupled with the ingenious use of props, most notably a slat bed and hand-held LED lights, brought the work to life.

The performers all grabbed my attention and were 100 percent committed to their roles. Although there wasn’t as much dancing as I had hoped for, there were several short dance numbers with interesting partnering. The four artists – Felicity Doolette, Jianna Georgiou, Lorcan Hooper and Dana Nance – blew me away, all for different reasons and at different moments. What a strong cast!

Restless Dance Theatre is made up of dancers with and without a variety of disabilities. But are these dancers disabled? I would argue not. In this work the dancers’ so called “disabilities” allowed them to be real and raw and throw issues such as discrimination and rejection into our faces like no one else could. What a powerful work. Salt gave us an intimate glance into the lives of these individuals and I was honoured to share the theatre with them. I left with an even higher respect for people in all walks of life and a greater understanding of the human psyche – the good and the bad.