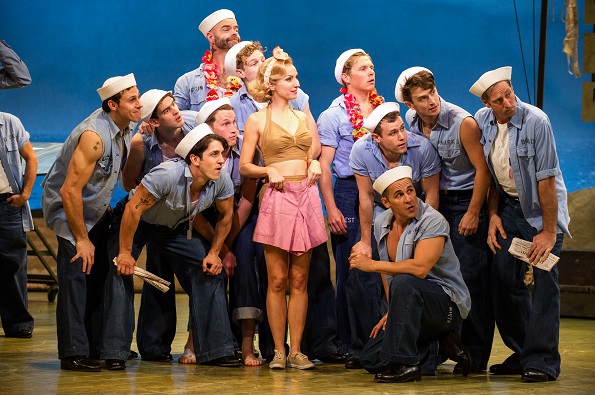 One of America’s most popular musicals, South Pacific, has swept into Adelaide. Presented by Opera Australia and John Frost, South Pacific is the first Rodgers & Hammerstein production the company has presented. After breaking the box office record at Sydney Opera House at the premiere in 2012, a highly anticipated return season of the musical was scheduled, and I was lucky enough to get two seats!

South Pacific is an ultimately feel good musical that packs it all in: love, fun, cheekiness and humour, but also war, temptation and death. It discusses issues such as racism and tolerance and speaks about how love can overcome all, with a powerful message that is as important today as when the musical was first presented in 1949.

With famous songs such as “I’m Gonna Wash That Man Right Outa My Hair”,  “Younger than Springtime” and “A Wonderful Guy”, you can’t help but sing along, being swept into the story, feeling the passion behind every word along with the performers.

The cast is talented and they bring the powerful story to life. Lisa McCune as Nellie Forebush, the young leading lady confused over her romantic feelings for an older, French plantation owner, is perfect in her role. Although she is in her 40s she plays the role of a young nurse in her 20s very convincingly and is so much fun to watch. She is cute and naive in fitting with her character, but she brings the maturity of a true performer to the stage at the same time. She is a delight and the star of the musical!

Teddy Tahu Rhodes as Forebush’s French love interest Emile De Becque has a commanding stage presence and powerful voice. He is a talented singer, although the amplification on the night, mixed with his character’s French accent, made him a little hard to understand and somewhat overpowering. His voice carries so well that such amplification is not needed and was distracting.

Christine Anu as Bloody Mary is transformed from the gorgeous performer we know and love into an unattractive, crass islander with rotten teeth and straggly hair. She seems to relish her role and have a lot of fun with it. Anu is brilliant.

Apart from some dancing by the young navy men and some comical and fun dancing in a Thanksgiving show scene, South Pacific lacks dance numbers. This musical is much more about the acting and singing. Although I would personally prefer more dance, it isn’t really needed to tell the story and it doesn’t feel as though anything is missing.

It was obvious that such a musical attracts an older audience, as I was definitely one of the youngest in the crowd, but I think this musical should attract young adults as well as the more mature who fondly remember the movie from their era. It has a powerful message and a great mix of fun and poignant musical numbers, plus Lisa McCune is such a joy to watch. Get your tickets!