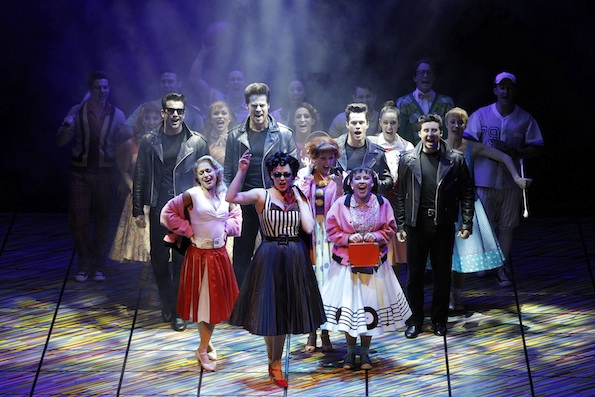 They play love interests Kenickie and Rizzo, yet this is not the first time the musical theatre stars have been joined at the hip. The two met at university 10 years earlier and are now relishing the chance to work side by side in the energetic and lively stage adaptation of Grease The Musical.

Here, Dance Informa caught up with the pair during the Sydney leg of the show to talk about their iconic characters, the amazing cast line-up and how much fun they have been having backstage.

What has the audience’s reaction been on the show so far?

Stephen Mahy
Audience members dress up in Pink Ladies’ jackets, pink hair and leather jackets, and sing all the songs – I think it’s safe to say they are loving it!

Lucy Maunder
The audience reaction has been the same every show. They just love it and are on their feet in the finale having a ball. It’s been fantastic!

Having now moved on to the Sydney leg of the show, do you feel more comfortable or more settled into the role?

Stephen
Being in Sydney is fantastic because it’s home for me. The show is rocking and having the response we had in Brisbane.

Lucy
Yes, it’s always good to settle into a role, but each venue is different and each audience is different. The energy of each show has a unique and special feel, which is why I love live theatre. 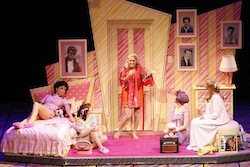 I’m sure you would agree that the cast line-up is amazing. Having known each other before Grease, and now being able to work together, would you say that’s the icing on the cake?

Stephen
Absolutely. Lucy is a fantastic performer and to tread the boards with her every night is a dream.

Lucy
Yes, Stephen and I were great friends at university. Working with him every night is great! We still have as much fun 10 years on, and particularly playing Rizzo and Kenickie gives us the chance to really work closely.

What is it you love most about playing your particular character?

Stephen
‘Greased Lightning’ eight shows a week with all the boys. It goes off!

Lucy
I just think Rizzo’s the best character. I always have, even when I first saw the movie. She’s got such a weight and gets to be so cool, but also has a great vulnerability and heart.

Stephen
Todd, Bert, Rob, Gretel and Val have all been wonderful. Their spirit is amazing. They live theatre, they bleed theatre and performing, and the audience let’s us know that. No one leaves the stage without sweating – including Bert!

Lucy
They are all wonderful to work with. Needless to say, there are a lot of laughs backstage, and it’s fabulous to watch, as they’re such stars!

How do you go about preparing for such an iconic role? Do you feel any pressure to live up to audience expectations? 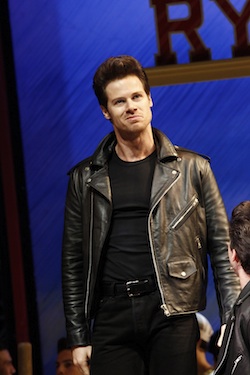 Stephen
There was some pressure, but as we dove head first into the show, we found our feet and I truly believe we made it our own.

Lucy
Of course there’s an element of pressure, but I’ve tried to bring a lot of myself to Rizzo rather than copying Stockard Channing who I think is a perfect Rizzo. But obviously there are iconic qualities that have to be there, and I hope those come through in my performance!

Do you have any pre-show rituals you always take yourself through?

Stephen
Getting my hair up in a quiff every night has become my ritual. To get it right every night!

Lucy
We’re all doing the ‘30 day squat challenge’ at the moment so that’s something that happens at interval (not pre-show) and is pretty funny! But with pre-show, just the usual physical and vocal warm-ups to prevent injury, and I eat pretty well and take care of myself. I make sure I get at least eight hours of sleep a night to keep my voice in a good state.

With Grease being such a high-energy show, do you find the process of performing so many nights a week a bit draining?

Stephen
I have lost about 7 kg since we started, so I have to eat so much food, keep my weight training up and remember to rest. It’s hardly work, so I keep reminding myself, you are living your dream.

Lucy
I keep my energy up by eating lots of good food. Of course, eight shows a week is draining and we’re all exhausted by Sunday night, but the audience reaction keeps it fun and worth all the fatigue! Grease is an impossible show to ‘phone in’ and everyone has been blown away by the energy level on stage.

And what would your advice be for those seeking a career in musical theatre?

Stephen
Watch, listen and learn. Push yourselves as hard as you can and no matter what don’t give up on your dream. Make a choice, take a chance or your life will never change: the three C’s.

Lucy
Keep all your skills up and keep having lessons, as you can never learn enough. You can’t rely on one skill anymore, whether it’s singing, dancing or acting. And support live theatre. See as much as possible and watch and learn from other actors.