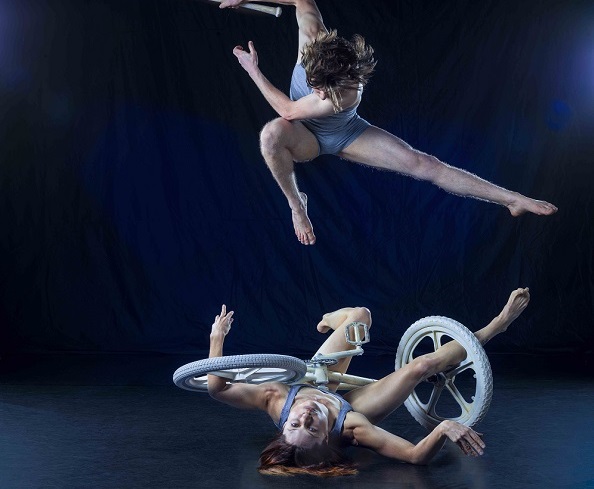 In the first part of this series I covered the meaning of creativity and how we can encourage it. I then discussed the creative process. Now let’s look at collaboration. The ability to collaborate, and to facilitate collaboration, is a vital component of the choreographer’s tool kit. Here successful choreographers Larissa McGowan, Billie Cook and Carol Wellman Kelly share their experiences and insights.

I am particularly taken with the idea of ‘The Outsider’ described by Jonah Lehrer in his book Imagine.  An outsider is someone on the fringes of a field – the passionate amateur, a less experienced dancer, or collaborator from another field, for example.  The outsider offers the benefits of ‘knowing less’.  Since they don’t know everything about that field, they also lack the unconscious assumptions of experts from the field.  The outsider may be unaware that the idea they are about to try may seem foolhardy to the more initiated.  The result is that outsiders bring unexpected ideas from one knowledge field and apply them to the new area.

Lehrer writes about research undertaken by Brian Uzzi, who wanted to understand the ideal form of creative collaboration. Uzzi studied nearly every musical produced on Broadway between 1877 and 1990.  He found that the best teams were those with a mix of relationships – some people who had worked or socialised together a lot, and some new people.  This was the case for West Side Story, one of the most successful Broadway musicals of all time.  The creative team included several collaborators who had worked together before – including Jerome Robbins, Leonard Bernstein and Authur Laurents, but they had a crucial injection of unknown talent in lyricist Stephen Sondheim and assistant choreographer Peter Gennaro.  This is the outsider effect in a team environment, and is a reason why West Side Story was so successful, because of the familiarity of most team members, and the added spice of the outsider.

I was interested to know whether my choreographers had a similar experience in their collaborations.  Carol Wellman Kelly’s experience is a testament to the idea of involving an ‘outsider’ in a project.  She believes that the most successful projects she has been involved in are when she has been the outsider, invited as an ‘artstarter’, provocateur, lateral thinker, devil’s advocate, mentor or facilitator.

Larissa McGowan deliberately chose to work with less experienced dancers when she created ‘Skeleton’ because they are less likely to have already established their own working habits.  She knew it would mean a lot more work as she’d need to train the dancers to some extent, but they all offered her something that was exciting and new, yet kind of uncertain.  She knew she was taking a risk.  For example, could they work under pressure?  But she had a long lead time, which gave her the chance to get familiar with them, and for them to understand how she creates and what she expected from them. To counteract the inexperience of the group, Larissa felt it was necessary to have another experienced dancer in the mix, so she brought in Lisa Griffiths.  Larissa was also a dancer in Skeleton, so her cast included two mature, experienced female dancers, and three less experienced male dancers.  Larissa believes the less experienced dancers were inspired by how hard Lisa worked – they saw her determination and the excitement still in her eyes about creating and collaborating.

Each of the choreographers I spoke to emphasised the creative contribution made by their dancers.  I wanted to know whether it is always important for dancers to bring creativity to a project.  In the more traditional world of classical ballet, it seems that it is expression, rather than creativity, that is required of dancers.  There is a common assumption that an artist is creative.  However, there is a difference between being creative (that is, able to create something new) and being a good technician.  A true artist, regardless of artform, requires both creativity and technical skill.  A high level of technical skill alone does not make someone an artist.

In exploring the intersection between creativity and performance, I asked my choreographers what they thought.  Their responses were illuminating, demonstrating that creativity from dancers is vital not just in development, but also in performance.

In the development of a dance work, many choreographers, especially contemporary choreographers expect creative input from their dancers.  As Billie Cook said, the moment she starts working with a dancer she is asking them to give of themselves, to know themselves better and be aware of their creative flow.  If she was the dancer and wasn’t asked by the choreographer to contribute creatively, she would pour all her creativity into the expression.

Both Billie and Carol noted that creativity is particularly important in performance if dancers are expected to improvise during a performance.  Carol also suggested that even when there is no improvisation in a performance, the ability to improvise may be necessary if something goes wrong.  She was impressed by a performance of a Rambert piece where the music stopped at three minutes into a 20 minute piece, and the performers continued for the rest of the piece without a sound.  I had an experience like this myself, during the 2009 performance of Black Coffee by Move Through Life.  Most of the performance was to live music, but there was one piece performed to recorded sound.  One night the music stopped part way through.  I was in the audience and, as the director, glimpsed a tiny flash of panic in the eyes of the dancers, but it was imperceptible to the audience.  The dancers froze.  Fortunately, the music started again, but it was from the beginning.  Without batting an eyelid, one of the dancers moved … she went back to the beginning of the piece.  All the others followed.  Audience members I spoke to later said they had no idea it was a mistake, and thought it added an extra element to the message of the piece.

Carol describes creativity as a natural instinct for survival.  When things alter in your environment, you have to adapt.  Adaption is creative – it expands, restructures and re-visions things so we can succeed and procreate.

Larissa points out that dance is, by its very nature, ephemeral.  It’s there and then it’s gone.  She enjoys the energy between herself and the audience.  It’s what drives her as a performer. She can rehearse everything and get it as slick as possible, but once she’s out on the stage she is in another world.  As a performer, she aims to evoke something for the audience member.  It’s a challenge, it’s a moment in time, and you must be in the now when you are onstage.  Once the performance starts, it is out of the hands of the choreographer, and the dancers become the custodians of the creativity.

I imagine that most people in the dance world would agree that creativity is a fundamental element of the artform.  But I wonder how many young dancers are trained in creativity?  I suspect that in fact what does happen is that creativity is systematically trained out of dancers, as they learn to perform very specific movement, to be precise in the chase for high exam marks and winning competitions.  The precision required for achieving a high technical level is valid and important, however, I believe it is important to recognise the impact this can have on creativity.

To counter the negative impact of rigorous training on creativity, I recommend that dance teachers consider implementing specific strategies to sustain and further develop the creativity of their students, perhaps by offering specific classes on choreography and improvisation.  At the very least, I urge teachers to communicate the value of individuality and creativity by allowing space for creative risk taking, mistakes and play.