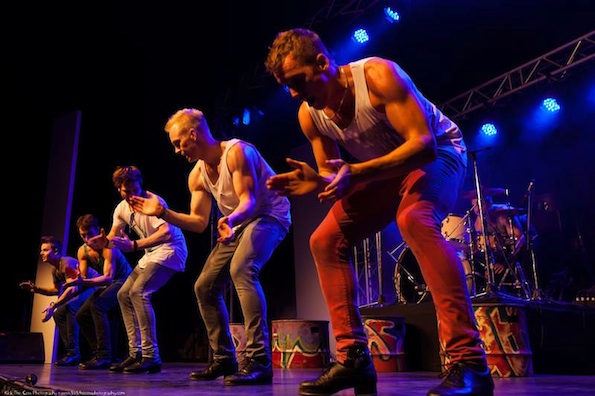 Bang! Crash! Tap! hits the Melbourne stage this September hot off the heels of Raw Dance Company’s successful overseas tour. Dubbed “disarmingly phenomenal” by De Volkskrant in Europe and described as “expert hoofers” by The New York Times, the production is set to show local audiences why Raw Dance Company is one of Australia’s most innovative and exciting dance companies.

Celebrating Raw Dance Company’s 15th birthday, Bang! Crash! Tap! is a mash up of dance styles such as tap and hip-hop with live music including percussion and beat boxing.

Director, producer and performer Andrew Fee spoke to Dance Informa ahead of the production’s Melbourne season.

How did Raw Dance Company come to be?

In 1998 I created a dance group called Raw Metal… since this time Raw Metal has grown to become Raw, now employing over 50 people throughout Australia, touring live performances internationally and delivering dance education programs to hundreds of thousands of people worldwide each year.

What makes the company unique?

Raw follows in the footsteps of some of Australia’s greatest entertainment exports, offering audiences a youthful versatility, appeal and a collection of amazing Australian talent that challenges some of the world’s best dance companies.

The major difference is Raw has been an independent dance company since its inception, making it one of only a few that has been able to create a self-sustainable arts company.

Why do you think the company is more popular overseas than at home in Australia?

Australians seem to be, in general, fairly popular internationally – from travelling to performing. I think that most countries and cultures are intrigued about our accents and the way we live. Raw’s performance style showcases our general relaxed nature and easy-going attitude, which we receive a lot of positive feedback about from audience members. I also believe that Australian performers and actors are fairly well known to be athletic and masculine, which is certainly what we focus on with our performances hear in Australia and abroad.

Tell us about Bang! Crash! Tap!

Bang! Crash! Tap! features a crew of two tap dancers, an amazing beat boxing champion and one of Australia’s most talented drummers. It is a mind-blowing dance and percussion stage spectacular. Each member of the crew offers their talents to create a fun and energetic show that promises laughs, gasps, amazing moves and plenty of raw energy.

Dance in general has been extremely popular, especially with boys and young men. This is such a positive and wonderful thing for dance and the arts. With shows like So You Think You Can Dance, Dancing with the Stars, Australia’s Got Talent and America’s Best Dance Crew, dance has become really cool and I hope it continues to inspire more and more young boys, and girls, to dance!

You have had a vast and varied career as a performer yourself. Do you prefer to be on stage or part of the creative process?

Over the years, I have had to play many artistic roles, including performer, director, producer, tour manager, stage manager, teacher and choreographer, along with the not so exiting business and management roles such as accountant, strategic developer, cleaner, builder, sales person, marketer, negotiator… and the list goes on and on.

It’s always exciting to be a part of creating new work with a brilliant creative team.  It’s certainly very hard to be a performer, director and producer all at once and not something I would suggest to anyone that doesn’t like stress.

The thing I love about dance is that it entertains, explains, inspires and challenges audiences and performers everyday. There are not many things in life you can say that about, which is why dancing is so amazing!