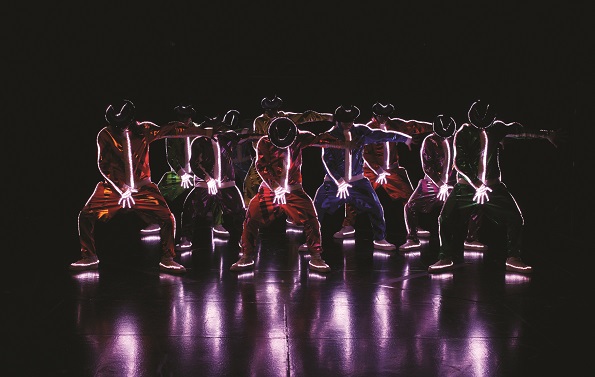 Be prepared for a thriller of a show! Arriving this September to Australia, Cirque du Soleil’s Michael Jackson THE IMMORTAL World Tour gives fans a unique view into the mind of the musical and dance genius that transformed pop culture.

Written and directed by Jamie King, the show includes 49 international dancers, musicians and acrobats. Expect to see Cirque du Soleil’s trademark acrobatics and stunning visuals, alongside the choreography that inspired a future generation of dancers. Since its world premiere in Montreal in October 2011, the show has been captivating audiences across North America, Europe and Asia.

During the tour’s Asian leg, Dance Informa caught up with Dance Master Laurie Sposit and Dance Captain Tammy To.

First, could you explain for us what the role of dance master involves?

Basically my role is to take care of the integrity of the show. With that, it means all of the choreography from creation. I will watch the show, essentially giving notes to the dancers and making sure everything stays the way it was created. When new artists are brought in, I put them into the show and make sure they know their new tracks. I do all of the scheduling for rehearsals and training, and basically take care of the artists. I make sure everyone knows exactly what they’re doing. If anything needs to be re-staged or re-choreographed, I take care of that.

How did you hear about the role?

Well, I knew the creator Jamie King, before he became this big director. We both took class together as dancers in Los Angeles. When he moved into choreography, I worked for him as a dancer, so he hired me on many occasions when working for people like Madonna. I helped him on The Spice Girls Tour, and that was essentially the same role so I took care of the ladies and gave them all of their notes. And so when this show came up, because it was such a heavily-based dance show, Jamie recommended they have someone go on tour and take care of all the choreography. He and his assistants brought up my name and then they turned it over to Cirque du Soleil. I interviewed with them, flew to Montreal and was essentially offered the job.

During creation [the rehearsals] were very long. That was three months basically of all-day rehearsals. It was eight to ten hours a day. On the road we’re kind of dictated by our schedule in terms of how much time we have on stage to actually utilise the stage or else we’ll use the studio. I do a few video rehearsals in the workout room just for choreography and then we just basically go into the show. On show days we do some rehearsals on stage and then they actually perform the show. So it can be a long day. They come in at about one or two o’clock and have rehearsals all day, then it’s time to get ready for the show and then they have the two hour show. On days off in the studio, we may do a clean-up rehearsal for four hours or if a new artist is coming in, I’ll take them in for three or four hours and go through their whole tracks.

As dance master, what’s your working relationship with the choreographers?

I wasn’t here at the very beginning of creation, so when they first started the show they hired a handful of different choreographers. Jamie and his assistants actually directed the choreographers, basically giving them an outline of what they wanted to see in each number, and then the choreographers would create it. They would make changes accordingly if Jamie wanted to change anything or make something different. Then I came in to learn all of the choreography and once we went on the road they all went home. Now we are basically the operation team and we keep the show running.

What can we expect from the whole show?

There are over 35 songs of Michael’s through the show, whether they’re pieces or full numbers. It’s just really all of his iconic choreography. There’s elements where the fans will be so excited and will see exactly what they see in the videos and in his TV appearances. That’s kind of thrilling for the fans. And then there’s obviously new stuff because it’s coupled with Cirque, so you’ll see some aerial and acrobatic elements combined with the dance and the screens, and there’s a bunch of video content with Michael. So although he’s not there, his energy and spirit is in the video, in the costumes and all the choreography, and it’s just a major impact with his images.

What can we expect from the costumes?

The costumes are fantastic! There are over 1,200 costumes that we travel with. It’s amazing. There are some that have LEDs and you’ve got the gloves and the hat; the classic kind of costumes that Michael wore. There are a lot of sparkles and things like that, which are fun because it’s Cirque du Soleil and they make it very extravagant and fun to watch.

What qualities are required of the dancers?

It’s such a variety of dancers, which brings a huge diversity. Some are classically trained and some are street dancers, some are more acrobatic, some are more hip-hop and within that it’s fun and it’s challenging, but you get everyone to learn the same choreography.

Are there any challenges when choreographing for a show where acrobatics are involved?

Yeah, that’s been fun. We definitely have separate dancers and acrobats but we’ve actually created a word called ‘dacros’ now because we have acrobats that are dancing; it’s very funny. So it’s not as easy for us to teach acrobats, but they love it. We teach them how to count and its kind of fun for everyone.

Do you think your experience of having toured with artists like Janet Jackson has helped you in the role of dance master?

Absolutely. Having been a performer all my life I feel like I can understand, connect and really have compassion for the dancers when I know that they’re struggling, or if they’re having problems on stage. So being out on tour, having been in these concerts and similar situations has given me much more of a background to execute what I need to do to keep everyone confident and calm, and just produce a good show.

Chatting with Tammy To – Dancer and Dance Captain

Can you explain what the role of dance captain involves?

I’m kind of Laurie’s right hand woman. My main purpose is basically to know all of the choreography for the show, know all of the different staging patterns, basically help teach the performers and make any adjustments if we have anybody out of the show.

How did you come to get the role?

About one or two weeks into the tour, the director approached me to see if I was interested in the position. I think it was a group decision where everyone from creation had some input.

What was involved during the audition process?

Actually for me, I was unavailable to attend any of the auditions, so I had my agent speak directly with Jamie King. I’d actually worked with Jamie King in the past as well as Travis Payne, so I told them that I was interested but unable to attend any of the actual Cirque auditions. They had known my work from before and recommended me to Cirque. Then Cirque contacted me and asked if I’d be interested.

It depends on the day. Because we’re moving from arena to arena, the set up is different in every city that we go to, depending on how high the ceiling is or whether we have new artists coming in. A lot of the time we have general acrobatic training and validations, and then a lot of the time we have dance rehearsals and workshops just to kind of keep us up to date and learn back-up numbers. We have pretty crazy days here.

How have the audiences reacted to the show so far?

It’s been really, really great! We’ve done North America and then we finished Europe. We’ve been in Asia for a few months. It’s crazy how we definitely see the different cultures in every arena we go to, but by the end of the show everyone is up on their feet dancing and really taking in the music and energy of Michael. We’re really lucky to have great audiences in every city we visit.

What kind of dance numbers can we expect to see?

You’re going to get a little bit of everything with this show. Of course it’s MJ, so you have your classics. You’ve got Thriller, Smooth Criminal, Beat It, Billie Jean and all those. So a lot of them are really iconic and then we do have other numbers with choreographers like Tabitha and Napoleon, Jamal Sims and Mandy Moore, so we definitely have choreographers that came from across the board. So, you’ll see a bit of everything.

Would you say it’s required for all of the dancers to be versatile?

I definitely think for our show it helps for a lot of dancers to be versatile. We also did have a lot of dancers come in who were specialists whether it be in popping and locking, break dancers or tap dancers, but we’re lucky because every specialist that we have also had training in other dance styles and if they didn’t before, they have grown since doing this show over the last year. At the end of the day, now we are more versatile than we were before.

Because it is an acrobatic show are the dancers required to have a small amount of acrobatic skills?

What can we expect to see costume-wise?

Oh, you’re going to see everything! [She laughs]. Really, you’ll see such a wide range. Because we’re doing so many MJ songs, you’ll see everything from sparkly to the Smooth Criminal. We’ve got pretty much everything. Everything you’ve probably never seen before. It’s all very unique.

Would you say this show is a career highlight for you?

Definitely. I think that in my career I auditioned for This Is It, but that was the only audition I had in the time, and unfortunately, Michael never made it to that tour. So, I think this has been kind of a blessing, and for a dancer you dream to dance to MJ’s music, and to be able to do that every night to audiences that soak every bit of it in…I’ve been really lucky and it’s definitely a career highlight for sure.

For tickets, visit ticketek.com.au or call 132 849. Premium Tickets, VIP Experiences and Official Travel Packages can be booked at www.showbiz.com.au/michaeljackson.