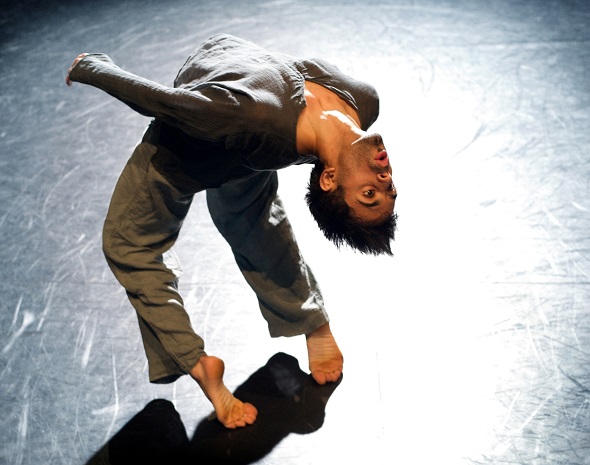 Schooled in the classical Indian styles of Kathak and Bharata Natyam, UK contemporary superstar Aakash Odedra is coming down to Oz to give us a taste of Rising.

English born Indian dancer Aakash Odedra is one of the new stars of British dance. His highly acclaimed solo work Rising will be premiered here in Australia at the upcoming Brisbane Festival and Parramasala Festival, Parramatta, Sydney.

Along with his mentor and contemporary Akram Khan, Odedra blends traditional Indian and Western contemporary forms to thrilling and athletic effect. It is this synthesis that sits at the heart of Rising, a work that combines the input of four choreographers (including Khan and Odedra himself) and celebrates Odedra’s incredible energy and rare vision.

Although busy creating a host of new works, including a James Brown tribute and a full-length piece for Austrian avant garde company ARS Electronica Futurelab, he continues to tour Rising internationally to both critical and audience acclaim.

Despite his insanely hectic schedule he made time to chat with Dance Informa from Edinburgh, where he was performing at the famed annual festival.

How has your training in classical Indian dance translated into the more Western contemporary style?

“I have trained in Indian classical styles Kathak and Bharata Natyam for around 21 years. I feel firmly rooted in these forms that have become the foundation of my dance vocabulary. I felt the need to draw from my earlier training rather than dismiss it.”

“Being Asian British, born and brought up in England, naturally the nature of my urban surroundings has impacted on my classical forms and interpretation of it. I found myself in a new zone, with a 2,000-year-old dance form expressed through the eyes of someone who lives in a contemporary environment. It became a necessity for me to explore the nature of this emerging, contrasting confluence of identities.”

“The idea of making Kathak more “relevant” to today’s society or more contemporary has to do with the choices one makes. How could I break down the rules to reconstruct something new? This is where I had to learn to translate, accumulate and eliminate material that we were experimenting with.”

You have worked with Akram Khan. To what extent has his passion for solo work inspired your own decision to pursue solo performance?

“Kathak or Bharata Natyam, in a very traditional sense, are solo dance styles. When we were trained (Akram and myself) we learnt through an ancient system called “Guru Shishya Parampara,” which focuses on one-to-one intense training for years, after which your debut performance (“Rang Manch Pravesh”) takes place.”

“A manch pravesh is a full-length two and a half hour solo performance! Keeping this in mind doing solo work becomes a part of your ethos. It’s built in to the fabric of the art and performance training.”

“However, to do a solo evening of work was new for my understanding and was a great challenge. Akram believed in me at times more than I did in myself and sometimes when someone has so much faith in you it makes you do things you never thought were possible.”

“I actually felt privileged to be around Akram bhai (“brother”) during the creation of Desh. After rehearsals I would run down to see the run every evening. For me to see Desh was both inspiring and nerve wrecking. How does one live up to a solo performance of that magnitude? Then I realised that there will only be one Akram Khan who can captivate an audience on his own for 70 minutes.”

What does it take to successfully deliver a full solo work – apart from incredible stamina?

“Letting go and losing yourself is the most important part. Trust that you will find something at the end.”

“There’s a certain energy and force that guides me on stage and my aim every show is to become one with it and to be present in the moment on a subconscious level. I take a lot of inspiration from whirling dervishes; and their one objective is to reach a moment of ecstasy.”

Rising is a solo work created in collaboration with three choreographers. How have you made these differing choreographic languages speak fluently together in the one show?

“[One part is] having such experienced legendary contemporary exponents both guide you and the evening of work. Then there comes a personal responsibility to retain small details of each choreographer’s approach to the work and how to apply these techniques to maximise the distinction between the character of individual pieces.”

“During a Kathak evening we would change characters during several stages of the performance, applying that previously learnt method and modifying it slightly. This helps both the flow of the evening and with the division of all four pieces in the show.”

You are known for your vigorous, athletic style. Is this a fair observation?

“As a child I was super hyper and was diagnosed with dyslexia. Research shows that the mind of a dyslexic is four times faster than the average person’s. Speed and energy have always been a part of who I am. It never felt forced or superficial. Add passion to this equation and it takes the raw physicality to a totally new level. For me, my body has always physicalised my sense of spirit/soul and most of the time I barely feel like I can keep myself on the ground!”

With regards to dancers/choreographers from India and Pakistan, what is it that they are bringing to the Western dance palette?

“We bring a sense of narrative and soul to the work. We learn Kathak or another form of dance as a form of storytelling. Western audiences are used to abstraction; but then there is a risk of the performance being without soul. So perhaps us making our classical movement into a contemporary form gives new movement information and a way of telling stories differently.”

And lastly, Aakash, here’s your chance to tell us anything you’d like about either Rising, yourself, dance in general, idiotic journalists, the new Premier League season or indeed anything you feel relevant, funny or interesting. (Go for it.)

“I love David Attenborough and am obsessed with animals and their behaviour. I thought I was Bambi when I was eight. I did a good interpretation of it taking its first newborn steps. I was nicknamed Mowgli from the Jungle Book because I ran around in underwear chasing animals!”