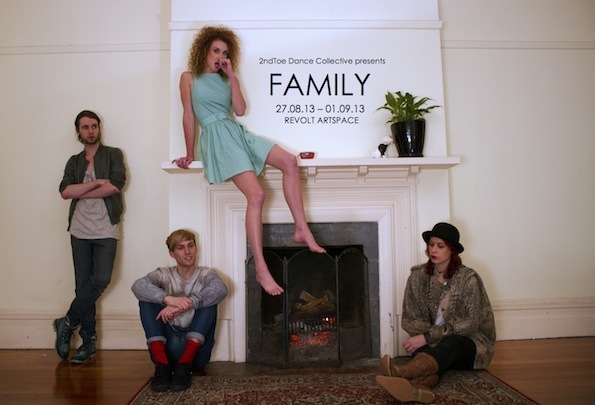 What’s the solution to that ongoing problem of “too much talent, not enough work”? Three words: make your own. 2nd Toe Dance Collective is an inspiring bunch of young people who are doing just that, and making their extraordinary mark on both professional and community dance in the process. Dance Informa’s Rain Francis spoke to Co-Artistic Director Frankie Snowdon about the collective, and their upcoming work Family.

2nd Toe Dance Collective was established in 2005 by Adam Wheeler. Two years later, he was joined by Snowdon, along with Madeleine Krenek, Tyler Hawkins and Benjamin Hancock. Another two years down the track, they welcomed James Andrews to the party.

As individuals, these dancers and dance makers have forged professional careers, working with some of the top companies and choreographers in Australia and New Zealand. As a collective, they contribute to the development of contemporary dance at numerous schools and also run a groundbreaking programme in the Northern Territory. They’ve made several professional works, including many that fuse their interests in pop culture, film, music, design and cross-disciplinary collaboration.

The latest of their professional creations is a collection of four distinctly personal solos, entitled Family. It’s a work that pulls apart the traditional notions of family and looks at the importance of “finding your people,” whether blood or adopted.

“We wanted to investigate the nuts and bolts of our individual family dynamics and how they’ve affected and shaped us,” says Snowdon. “None of the collective are originally from Melbourne, so we also wanted to give a nod to the families we create for ourselves.”

The concept stemmed from a traumatic news story a few years ago, of a father throwing his small daughter off the Westgate bridge in a revenge attempt on his ex-partner. “It brought about a lot of discussions about the idea of family and what that meant to us individually,” says Snowdon. “Each of the soloists have had extremely different upbringings, so there were a lot of discussions about the differences, challenges and triumphs faced within our own family units and how that has affected who we are now. It is a deeply personal investigation into the makeup of the individual, which often opens up a lot of questions and realisations about the people we have become.”

Family will be presented from August 27 to September 1 at the unique Revolt Artspace in Kensington, VIC. It’s a venue that is fast becoming one of Melbourne’s most important venues for artists of all genres, and is well known for its nurturing environment and anything-is-possible ethos. In a unique twist, audience members of the 90-minute work will be invited to share food with one another, each dish coming from the performers’ favourite family recipes.

“This sharing of food and conversation, is an act that families – immediate, extended, adopted or created – all engage in,” explains Snowdon. “We’re aiming to create an environment in which people feel at ease and free to engage with one another. We want people to reminisce and share their own stories. It’s becoming rarer and rarer to have this sort of sharing in an age of virtual immediacy and highly constructed presentations of self. There’s an element of asking the audience to reflect upon their memories and experiences of their families, and of people in general.”

Although 2nd Toe was fortunate enough to receive some local, state and philanthropic funding for the first two developments of Family, they have needed to look for alternative ways to raise funds required to present the final work. They have launched a Pozible campaign, which the public is invited to support, via www.pozible.com/project/29820. “The money raised will go directly to the people who’ve shown a huge amount of commitment and belief in the project, and worked extremely hard to get it to where it is now, ready to be shown to the world,” says Snowdon.

Finding the resources to maintain a practice and to create is of course an issue that most artists are all too familiar with. And, while Snowdon acknowledges that it has been one of 2nd Toe’s biggest challenges, she credits the thriving Melbourne arts community for its ongoing support. “Hard work and commitment is often rewarded in ways other than just receiving money,” she says. “That restlessness that we feel about pushing forward and not giving up is mimicked by many of our peers, so we all help to keep each other up. Sticking together is integral to the evolution and survival of our generation of dance makers.”

Following the performances of Family, 2nd Toe has big plans, including its biggest professional undertaking to date. Intriguingly described by Snowdon as “a cross-disciplinary, multi-media, city street crawling dance experience,” it is definitely one that’s going on must-see calendars. “It’s going to be something that everyone is going to be able to engage with,” Snowdon continues, “but is completely within the trajectory of really fleshing out our generation and what we’re interested in doing with dance and in the world at large.”

And the ultimate vision for 2nd Toe? “To take over the world, one body roll at a time, and have an absolute ball doing it,” she smiles. “There’s no letting up for team Toe, so as long as we’re dancing, creating, inspiring and learning, it’s onwards and upwards. It takes a long time to build up a decent reputation and sustainable practice, but it gets a little bit more attainable as we continue on our journey. There’s definitely no plans to ease off, that’s for sure.”

The enthusiasm and commitment resonating from this collective is intoxicating. I encourage all lovers of dance and art to show support by booking a ticket to Family, donating a few dollars via Pozible or even just by sharing the link through social media networks.

To book tickets, go to www.revoltproductions.com/MelbourneEvents.