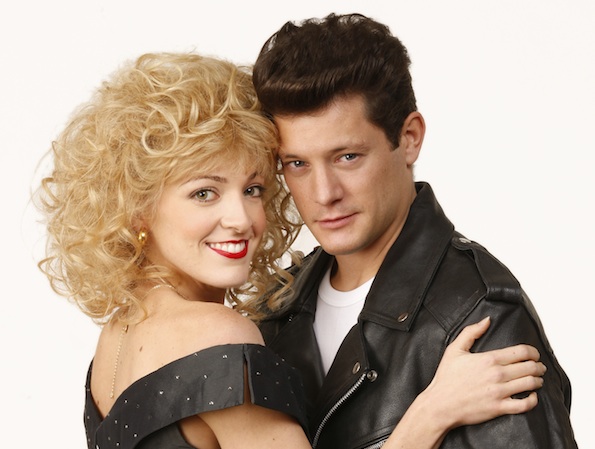 It’s electrifying, and the musical everyone wants to see! Grease opens late this month in Brisbane, and with preparations underway is surely living up to all the hype.

Dance Informa was lucky enough to chat prior to rehearsals with Rob Mills, Gretel Scarlett and Val Lehman who will play the roles of Danny Zuko, Sandy Dumbrowski and Miss Lynch. Here’s what they had to say on the iconic story of Grease and the great cast line-up.

The cast for Grease The Musical looks great! Have you worked alongside many of them before?

The cast looks like it’s one of the most enjoyable! I’ve met most of them already. I’ve worked with Bert [Newton] already and I know Todd [McKenney] pretty well. Gretel [Scarlett] seems like a hoot and most of the T-Birds I haven’t worked with yet, but I know them through the musical theatre circle and they’re all ripping blokes. I’m really looking forward to it. We’ve already had a few nights out and the energy between us all seems really good so far.

With Grease being an iconic story, do you feel pressure to live up to audience expectations?

Not really…I feel like I’m doing it my way. I feel really excited to bring the show back to Australia. It’s so much fun and the audience will just love it.

How have you gone about researching for the role of Danny Zuko?

I think I’ve seen the movie enough times as a kid, that I’ve kind of stopped watching the movie recently.

I’m really looking forward to day one of seeing what the director wants for me in this role. I’m sure several conversations will be had over the next couple of weeks going back and forth over what I like and what he likes and meeting somewhere in the middle.

Are you happy to continue going down the musical theatre path, or would you like to do more hosting roles?

I just go where the work is! I just say ‘yes’, because you don’t know where it’s going to lead. I’m hoping to do more hosting roles either in Australia or abroad.

Grease is full of fun and energy. Would you say this production has been the most enjoyable to be involved in?

Absolutely! It’s one of those shows I think that everyone knows about, so you can walk down the street and talk to someone about Grease and there’s that buzz and excitement. So I suppose it’s really a career highlight to be able to say I’m playing Sandy in Grease because it’s so well known and so popular, and I think that’s one of the most thrilling parts about it.

As it is a story that people love so much, do you feel any pressure?

Absolutely. I think that’s one thing that I’m overcoming at the moment; just trying to find my own feet with the role itself. It’s so iconic and there’s a danger of stepping too far away from what people know very well. So that’s something we’ll have to deal with [laughs] and have to handle over time. I will use the rehearsal process to feel comfortable in the role and make it my own.

Did you watch the movie a few more times to get reacquainted with the role of Sandy?

Yes. When Grease was coming and when we were going through the audition process, I definitely sat down and watched the video because stylistically they had it absolutely spot on with the cafeteria-style friendships and all of that kind of thing in school. It’s very specified in its time that I had to go back and look at that again. As a kid you’re watching it for the fun that the movie is and what the story is, but when you’re going in for an audition for a particular role, in this case Sandy in Grease, you’ve got to be able to sit back and pull her apart. Why is Sandy the way she is? What is it about Danny that she falls in love? So you have to go back and look beyond what it is as a movie. That was one of the more intense parts of the audition experience.

There are so many great names involved in the production. Are there any in particular you’re excited to meet?

Yes! I’ve worked with Bert before in Wicked so I’m absolutely ecstatic that he will be joining us again! He is like having the most amazing grandad on stage with you [laughs]. He’s that lovely gentleman that whenever there’s a little cast change, some understudy is on or there’s a little change to the show, he’ll be in the wings watching. He loves it. He absolutely adores what’s going on.

I had met Rob through people and we had just crossed paths. He was leaving Wicked as I was just joining so we didn’t get to work together, but we do know each other through the social scene of musical theatre.

I’m really looking forward to working with Todd McKenney. I think he’s going to be divine! I’ve met him through the launches, and he is just very funny [laughs]. What you see on TV is exactly what you get with him. I can’t wait to work with Anthony Callea and Val Lehman too. There’s such a great line-up there.

Has Bert given you any advice you have taken on board in your career?

Yeah, I think it’s just to believe in myself, to be honest. Wicked was all a very crazy show where I was thrown on a quarter of the way through, so I didn’t get the preparation time. Afterwards he stayed and he was just so supportive. That was one thing that was quite overwhelming to see such an iconic Australian human being so down-to-earth. He taught me to just believe in yourself and really trust what you do, and trust in yourself. That’s something I will always take with me.

Are you expecting Grease to live up to its expectation of being a fun and energetic show?

I do agree with you that’s it’s a high energy show, and obviously it is a lot of fun. I’m expecting it to be all those things!

How do you think the audience will respond to this particular production?

I think most audiences these days that go to the theatre don’t expect a show to be exactly the same as the movie, for instance. If they haven’t seen it before then they haven’t got that experience anyway. I understand that there’s a bit of a fresh approach with this particular production, and I’m looking forward to that. I’m sure the audiences will have a wonderful time!

How did you go about researching for the role of Miss Lynch?

I certainly don’t watch the movie because I don’t like looking at someone else playing the role that I will be. You have to remember that I’m from that era, so I remember the movie very well. So, no research was necessary [laughs].

For tickets and more information on the show, visit greaseistheword.com.au.