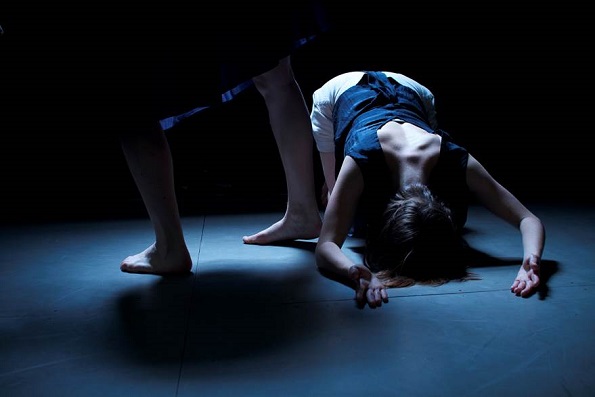 We are invited to a dimly lit room to sit in a circle of chairs facing inward. The language of the universe is a language of circles: the orbit of planets, the cyclical nature of seasons and the cycle of energy. The dance work Blizzard is set to exploit the potency of this circle.

Four openings divide the circle into quarters, creating entrances, exits and pathways. The choreographer Cursio invites us to close our eyes once seated, for perhaps 10 minutes. It is tempting to remain with eyes open to enjoy the austerity of the design, and the starkness and eeriness of The Substation.

An aural world emerges: breath, shuffle, pat and stomp; the squeal of flesh dragged across board. The source of the sounds manifests and wanders through three dimensions. A single loop of wide spots warms and deepens the inner of the circle. Outside the circle of chairs the light spills so that the creatures out there are partly shadowy. We can feel their presence, sometimes we hear or glimpse them, but for the most part, outside the circle is offstage, or deep away into the unknown.

The creatures we are presented with appear first as ghoulish, dragging themselves through trajectories across the circle folded over. A series of solos becomes duos and eventually a trio, feeding in and out through the openings in the circle. Later these creatures appear as druids – they build themselves away from the earth to extend upwards offering themselves to gods, are filled with ecstasy, or the relentless blind force of nature, they wear themselves out and fold themselves over once again. The ambiguity of the figures is pleasurable. We are not directly signalled how to receive them: druid or ghoul, animal or symbol, dancer or metaphor. 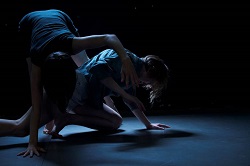 There is beautiful complicity between the performers Alice Dixon, Melissa Jones and Caroline Meaden, an exactitude to their changes in rhythm and a palpability to their imagination in the forms they manifest. The three druids listen through extended moments of regenerative stillness. A primitive bounce precedes an escalation into tangled trios and exhausting orbits where the performers seem to throw their energy, their presence to and fro from inside and out of the circle.  Suddenly, perhaps too suddenly, it is over, and they have left.

There is an irony of a work exploring ecology in a restored powerstation: it is an emblem of industrialism and consumption that has been through a process of decay, forgetting and rediscovery itself becoming an emblem for regeneration. Yet, there is no moralism or didactic aim present in Cursio’s work. It is a gentle, abstract investigation into the embodiment of motifs in nature. If you missed this very short season, watch out for a return season of Blizzard.