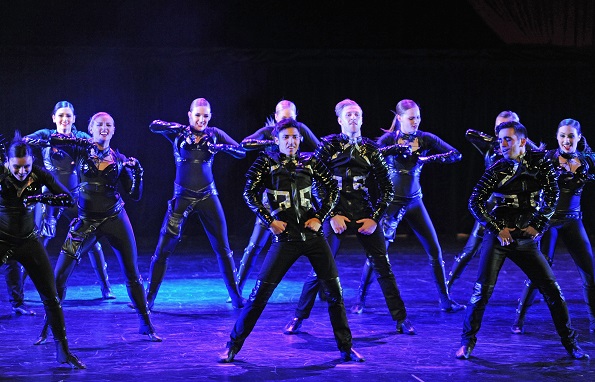 There was a full house eagerly awaiting the annual Sydney Eisteddfod McDonald’s Scholarships and Jazz Troupe Final on August 4. This is one of the most anticipated events in the Australian dance industry, seeing thousands of people flock to the Sydney Opera House each year from all over the country.

Eight talented, young classical dancers had their chance to shine, and show us why they should take home the coveted first prize of a $15,000 scholarship plus $3,000 cash, amongst the other perks of being a finalist. Just as exciting, eight energetic jazz troupes had their chance to fight it out for the ultimate competition title, accompanied by generous cash prizes.

The night began with four jazz troupes, followed by the eight soloists performing classical variations, and then the remaining four jazz troupes to round out the first half of the night. Every year the standard is good, and this year was no exception. Although still in their formative years, the classical competitors all showed great promise and potential. Not all were technically strong or mature performance-wise, but it is always lovely to see the dancers at this stage of their training, ready to go and embrace the preparation that will mature them for company work.

The two dancers who particularly stood out in their classical work were Jessica Allison-Walker and Joshua Denyer, both for different reasons. Jessica, for her attention to the detail in every moment of her variation from Giselle, including sensitivity and detail of technique, control and performance quality. She really understood her character, and although quite young in her approach, she brought out what she could at her stage of maturity as a performer.

The overall winner for the scholarship, Caleb Durbin, showed a lot of potential, but on this night he displayed quite poor technical work in his classical solo. His strength seemed to lay in his contemporary work, which was exceptional. Luckily for the competitors, the judging is not based on one performance, and Caleb would have shown the judges his potential and consistency in his class work and the first rounds of competition. It is actually not unusual for the candidate who seems to shine on the night of the finals, not be the overall winner.

Second place winner, Kiely Groenewegan, was the only competitor who was fairly consistent between her performance of her classical and contemporary variations, although her contemporary work did not show versatility. She won a $10,000 scholarship and $2,000 cash. Her classical Aurora’s Variation from Act III of Sleeping Beauty was just beautiful. She showed strength, control and a lovely level of performance for a young performer. There was not yet the depth of emotion that this variation might show, but she was a pleasure to watch.

The jazz troupes were all quite entertaining, with a variety of styles and choreographic influence.  Standout performers were third-placed Dance Junction, with a tight, dynamic and professional routine that could have been translated to any context, not just a competition stage. This is unusual in an eisteddfod setting and it made this routine distinct.

Winners Brent Street C were also outstanding, with an exciting and energetic routine. The competition was definitely fierce this year. Dubbo Ballet Studio came second place. They always bring something fun and quirky, and this year their piece was reminiscent of the 1980s.

The second half of the night began with the eight soloists’ free variations, of which they all chose to do a contemporary piece. Most were definitely stronger in their contemporary work. One performer in particular, Joshua Denyer, with his solo choreographed by Loredo Malcolm, seemed to be able to go beyond the competition and really change the atmosphere in the room, as if he was simply performing for us and sharing his love of dance, not competing. It was a highlight moment in the night. Tyson Powell and Alysha Matignago also seemed to bring out a similar quality, which is a rarity at any competition.

Once all eight dancers had completed their last dance, we were entertained by a variety of guest performances. Lachlan Monaghan was the highlighted special guest performer. Having previously won the scholarship in 2009, and now an artist with The Royal Birmingham Ballet, he graced us with a fun and entertaining solo from Kenneth MacMillan’s Elite Syncopations. Other performances including a stunning group of very talented, young classical dancers from the North Shore Dance Academy, a highly creative contemporary work from Ev & Bow Full Time Dance Training Centre, another young classical group from the Tanya Pearson Classical Coaching Academy, and a hilariously entertaining routine by the all-boys dance troupe from Glenhaven Public School.

The Sydney Eisteddfod McDonald’s Ballet Scholarship and Jazz Troupe Finals is a night where dreams are made and launched and it was a honour to be in the audience and witness these young dancers step towards their bright futures.