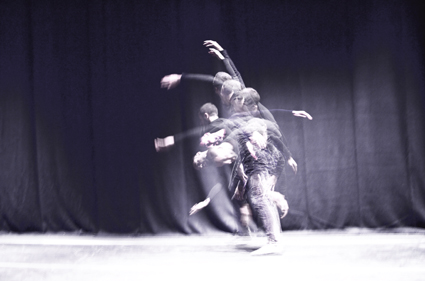 Intermission is the final instalment in a trilogy of solos by Matthew Day. The first work, Thousands was a study in stillness. The second, Cannibal “excavates the shimmering forces [discovered in Thousands] to explore a durational earthquake body.” Intermission then, is built entirely upon a wave pattern that came to emerge from Cannibal.

Admitted one at a time, the audience members enter the performance space in silence, and in a sense the work has already begun. The atmosphere is thick and heavy with… something, the space darkened and intimate, with a feeling of being closed off from any outside interference.

Day, clad entirely in black – including gloves – stands centre stage and begins barely perceptible movements, gradually shifting weight from foot to foot. This is the beginning of a motif that will be carried on for the 45-minute solo. The movement will grow and therefore morph, but essentially (as I interpreted it, at least) it is a study in infinity, the constant motion of the figure-eight pattern.

It is mesmerising and it’s certainly a feat of endurance. James Brown’s sound design, based around a low-frequency hum, goes hand in hand with the intensity of the movement and Travis Hodgson’s dim lighting.

It would’ve been good to have seen the whole trajectory of this trilogy. As a stand-alone piece, Intermission is intriguing in its own way, but definitely is a work that would have audiences divided.