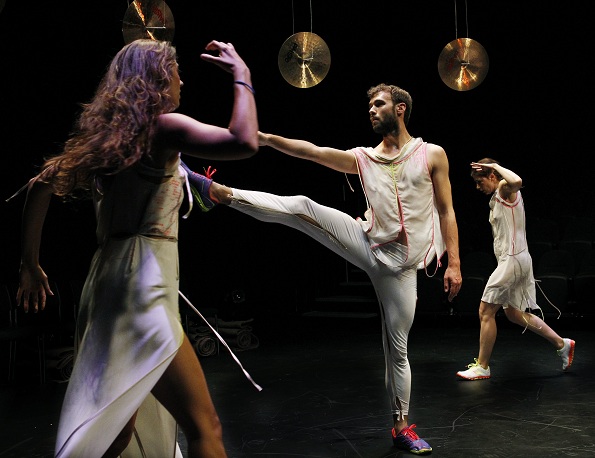 So, it was with a certain amount of trepidation that I approached BalletLab’s most recent offering.

A little trepidation that is, but a lot of curiosity. “Every audience member will be asked to surrender something” (or words to that effect) I had read in an interview with Artistic Director Phillip Adams. The performers would be nude. There was even some mention of audience “nude night”. Cue nervous glass of wine, pre-show.

The evening comprised a double bill, the first part created by Adams’ long-time muse and collaborator, Brooke Stamp. And All Things Return to Nature was performed by Stamp with Rennie McDougall, Matthew Day and Deanne Butterworth. The dancers wore graceful Grecian-style tunics with a modern twist, paired with fluorescent runners – the work of fashion designer Susan Dimasi. Inspired by the work of Baruch Spinoza, John Coltrane and Sun Ra, this piece was an “exploration of sound transmission and spatial experiences of time”. The movement built into something cyclical and constantly shifting; to me, the kinetic expression of a prism. The repetitive nature made it almost hypnotic.

The second part of the programme, Phillip Adams’ Tomorrow was probably one of the most out-there things I’ve seen, and I’ve watched a LOT of contemporary dance. It was very much an experience as opposed to a performance. Trying to describe it will never do it justice, but it involved constructing an appropriation of “the Intergration”, an area in the Mojave Desert which serves to communicate with aliens.

Adams and the rest of the performers were naked for the duration of this work, and the most remarkable thing about that turned out to be that after the initial two minutes, it was barely noticeable. In truth, too many other weird and wonderful things were taking place.

Audience members were approached by performers and asked to lie down on this blanket, hold this rock, remove their shoes. Coloured string, pebbles and other detritus were being placed deliberately around the space. Performers were walking hand-in-hand with audience members, quietly exchanging words. Gradually a clock-face arrangement was being formed in the performance arena; an architectural installation taking shape. Noises were amassing to form an intense, enveloping moat of sound, courtesy of the outstanding composer Garth Paine.

From my vantage point, safe in the back of the seating block, it was like being privy to some bizarre ritual – and there was something really beautiful and intriguing about it. The atmosphere in the room was one of openness, freedom and support. Adams essentially was creating his idea of utopia. If this all sounds vaguely cult-ish, well it was, but in a harmonious “we’re all in this together” kind of way. I guess that’s the appeal with cults.

Adams collaborated for this work with the architect Matthew Bird to “recreate an imagined abduction”, an event that became the climax of the performance. If the chance comes around again to witness this quite incredible creation, take it. Don’t miss out on experiencing it on the basis that you don’t “do” audience participation. My advice is to go with an open mind; you’ll probably surprise yourself. Now I’m almost wishing I went on nude night. Maybe next time.