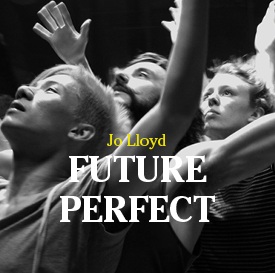 The future perfect tense is expressed in English in the form, “will have [done]”. It describes events that will happen before some specified point in the future. The highly unusual work Future Perfect, choreographed by Jo Lloyd, is inspired by this grammatical feature. The five dancers, we are told, are “abandoning the uncertainties of the present for a future that is already written.”

Whilst the inspiration for this work is genuinely intriguing and evocative, this work itself is unfortunately not. Though there have been a number of rave reviews of Future Perfect, this work was, admittedly, frequently baffling. This is potentially due to Lloyd’s emphasis on the formal and affective rather than the literal or interpretive; nonetheless, the overall effect left this reviewer cold.

The work takes place in front of a metallic silver backdrop with the performers dressed in sequined outfits. As a collective unit and later as semi-individuals, the dancers shake and wave their arms and hands furiously, conjuring up comical images of aliens and references to popular concepts of the futuristic. Though the ‘80s glam rock-meets-War of the Worlds’ effect holds some interest for the first few minutes of the show, it ultimately seemed a tad amateur and one could easily be forgiven for thinking he or she had walked in on a high school dance show based on this alone.

One of the most interesting passages in the work was the use of video animation, created by Rhian Hinkley. In the animation, the dancers’ faces morphed into one another, transforming from stack-like layers into a whole face and then whirling about the screen. Whilst it seemed oddly inserted into the work, halting its flow, it expresses the organic wholeness of the ensemble suggested in the early dance passages more artfully than the dancing itself.

The final passage of the work is its most dark, with a repeating sequence whereby a dancer collapses into the arms of the others, the mood of the other dancers initially supportive, then aggressive. Whilst it contained more emotional content than the other passages, again dance was paired with another medium, the recorded spoken word in this case, and again the latter proved more evocative.

Overall, Future Perfect is more interesting as a concept than it is translated in this dance work. Though it will have its appeal for the veterans of contemporary dance with an interest in the bizarrely formal, others might be less forgiving of its indulgent demands on the audience.