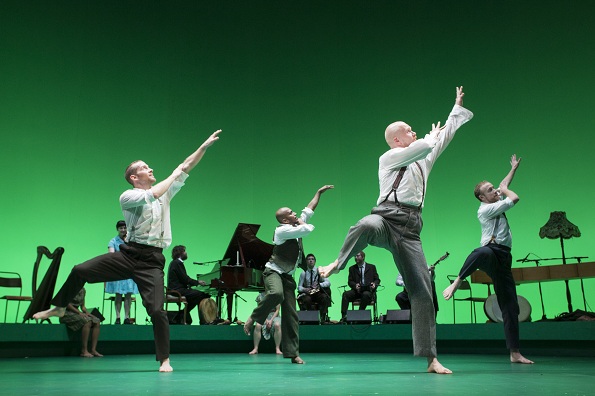 It would be hard to find a more powerfully explosive show celebrating the sheer exuberance and joy of dancing. Hotly anticipated Fabulous Beast, under the excellent direction of Michael Keegan-Dolan, returned to Sydney for Sydney Festival and brought us their tremendous Rian, which means ‘trace’ or ‘mark’ in Irish Gaelic.

Musically, under the energetic direction of Liam O Maonlai (a founding member of the band Hothouse Flowers), there is everything from amplified harp, piano, piccolo, drums, violin, and assorted pipes to percussion, all tremendously played and full of infectious toe-tapping rhythm. Traditional tunes are melded with original composition and the inventive use of sometimes unusual instrumentation. The show becomes a cross between concert and ceilidh.

Sabine Dargent’s set is a curved green amphitheatre, similar to that found in Irish pubs, with a raised platform on which seats and most of the musical instruments are arranged. The cast sit on the chairs when not performing and watch their colleagues. 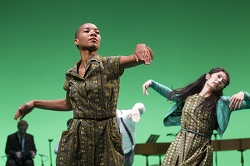 The lighting is relatively minimal, but at a couple of points there is very effective use of shadows cast moodily on the backdrop.

The work is plot-less, yet full of the boundless joy of dance and energy of movement. The incredible dancers seem boneless and inexhaustible. From the opening, with the traditional Irish harp, we are reminded of the company’s roots. There is not only emphasis on Celtic/Gaelic themes but a melding of Flamenco, African and Indian influences, plus hints of a ballet base. There is much unison work, and a lot of repeated phrases of movement. Keegan-Dolan seems to favour a feeling of vertical, circular movement. There is also rolling floor work. Apparently there are 108 different sorts of movement used in the show!

In one dance the men perform reaping-like movements while the women do little shakes of the shoulders combined with isolation movements of the torso. There is one section (possibly Pina Bausch inspired) where to an infectious, yet seemingly soporific uilleann pipes rhythm, the whole cast in a row of chairs, front centre, go into a dreamlike trance in their own worlds and start drifting. The audience love it. The dance is organically incorporated with the music with springy rocking, stamping steps that swing low, yet are simultaneously high-stepping. There are soft jumps with hands like stars.

O Maonlai has a couple of featured solos as does magnificent Eithne Ni Chathain, who in her show stopping solo is eventually joined by the four female dancers who become twisting, swaying trees with uplifted arms.

There is also a teasing duet for a male and female dancer that becomes a fun zigzagging chase. And the fragile, tender atmosphere when a man and a woman hesitantly touch, at first hand to hand then back to back with outstretched arms.  Melancholy short solos are contrasted with high energy jigs.

There is a marked change from the rather formal, stiff opening with hot suits and enclosed socks and shoes, to the hot, sweaty, barefoot, breathless ending with jackets discarded and shirts undone.

Enthralling stuff and a major highlight of this year’s Festival.