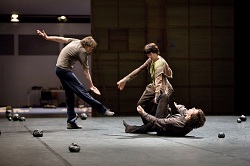 I had been hanging out to see anything by William Forsythe since my first year of dance school, when we were shown In the Middle, Somewhat Elevated on VHS (you do the math). My mind was officially blown.

Forsythe is the Radiohead of the dance world. Always reinventing, always experimenting, kicking butt in one genre but – never settling for a tried and true approach, despite being awesome at it – evolving effortlessly into the next. Or, more accurately, conjuring up a new genre altogether. This, to me, is the mark of a true artist.

The 2008 work, I don’t believe in outer space is outright bizarre at times, but always engaging. It is kind of like a fly-on-the-wall account of what it is to be human. It highlights the fact that our combined neuroses, insecurities and idiosyncrasies (our general ‘weirdness’, if you will) are in fact our common ground.

Hilariously, Gloria Gaynor’s I Will Survive gets a good run for its money. That quintessentially camp karaoke favourite finds its way into the context, reappearing in several incarnations and taking on various meanings. It is sometimes imbued with horror or with desperation – and sometimes, it’s just plain funny.

Not many other companies could put a throng of performers on stage in track pants and sneakers and have them look so polished. In this instance, the everyday nature of the costumes works, adding to the sense that this is about all of us, about our whole worlds, both external and internal. The stage itself is littered with debris; perhaps both the detritus hanging out in outer space and the maelstrom of our individual “baggage”.

Many of Forsythe’s performers are what you might describe as “mature”. From as far afield as Japan, Canada, Albania and Western Europe, they bring a diverse wealth of experience and culture to the party. Not simply incredible movers, they are impassioned, full body-and-soul artists, each seemingly utilising every fibre of his or her respective being. They are amazing to watch.

I don’t believe in outer space is about as far away from In the Middle, Somewhat Elevated as The King of Limbs is from Pablo Honey. And while In the Middle… will always be one of my go-to YouTube destinations when I’m trying to avoid writing, I don’t believe in outer space has blown my mind in a whole new way. This is a work you don’t feel you are just watching, but experiencing. It is at times a baffling vortex, but that’s life, right?