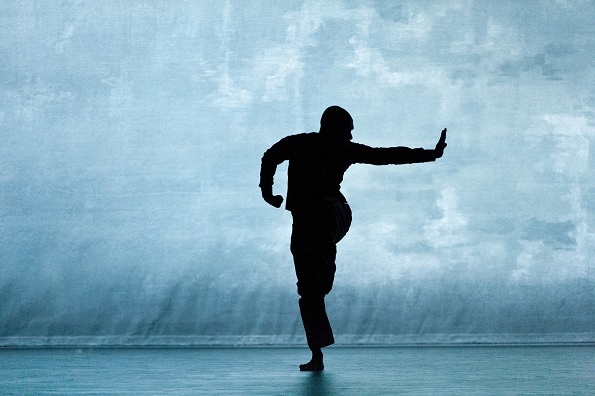 Akram Kahn has garnered a wider audience since he created a piece that was performed at the London Olympics Opening Ceremony earlier this year.  Before that, Kahn had proved himself to be a visionary contemporary choreographer.  His last stint in Australia showed audiences a work that was refreshing and inspired.

From the UK, but of Bangladeshi descent, Kahn’s movement style and vision is unique and clearly influenced by his family’s culture.  In Desh, the audience is transported to Bangladesh in a one man show that is both comical, moving, brilliant, and breathtaking.

There aren’t a lot of performers that can keep an audience entertained on their own, much less enthralled for an hour, but Kahn certainly succeeded in doing that.  Employing the talents of Oscar-winning set designer Tim Yip (Crouching Tiger, Hidden Dragon), animation from Yeast Culture, and music design from Nicolas Faure, Desh is a visual and sonic feast.

Kahn’s style of movement is very grounded and earthy, and while his footwork hints that he is not a technical dancer, the energy he puts into every movement and the incredible use of his body makes up for any technical short comings.

Some of the best moments of the show included Kahn’s personification of his father, by way of painting a face on his own bald head and speaking and dancing with head bowed so that the drawn on face came to life.  It was extraordinary and so brilliant how Kahn replicated the nuances of a man’s face all the while looking at the ground. Another highlight, and one of the most moving and inspiring parts of the evening, was when white animations were projected onto an essentially invisible screen at the front of the stage.  Kahn moved around behind the screen and interacted with the images.  The whole stage came to life and more than a few gasps were heard around the audience.

Desh is a must see for any dance or theatre lover, and if you have the opportunity to see any of Kahn’s work, make sure you go.