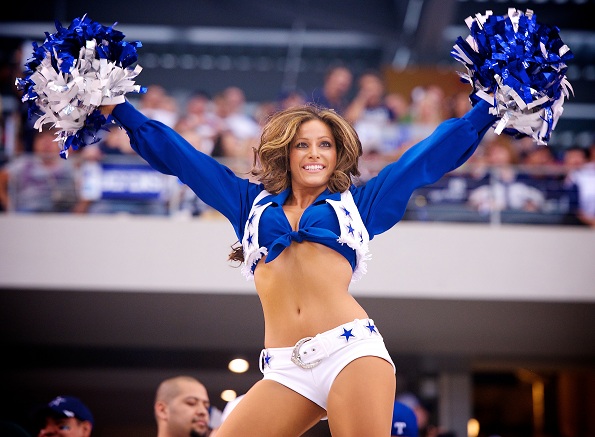 They’re considered the best in the business, are often imitated but never equalled, and know how to work a crowd on the football field. Among 500 other gorgeous and talented girls, Aussie Angela Nicotera set out to audition for the most renowned cheer squad on the other side of the world, in Dallas, Texas. Having studied dance throughout her childhood and being a loyal cheerleader for the NRL’s Manly Seabirds, Angela was determined to use her training and experience to earn the instantly recognisable blue and white uniform.

Now in her second season as a veteran for the squad, Dance Informa catches up with Angela to learn what it takes to become a cheerleader in the States.

How intense was the audition process?

The audition process is not only intense, but it’s long, strenuous, physically demanding and emotionally draining. The complete audition process takes twelve weeks. It’s like a version of Survivor for dancers!

What was involved in the audition during the preliminary stage?

During preliminaries you need to make an impression by dancing freestyle for 60 seconds, in groups of five. I was trying to forget there was a panel of fifteen judges, television cameras filming the reality show Dallas Cowboys Cheerleaders: Making the Team, and that I was auditioning at Cowboys Stadium, on the other side of the world. I was auditioning for the most renowned cheer squad! With 500 gorgeous girls striving for one of the coveted spots as a Dallas Cowboys Cheerleader and a multitude of rhinestones blinding sight, I started to doubt myself.

How hard was it to remain positive?

Somehow I made it to semi-finals, but it was still difficult to remain positive. Learning choreography and the world famous kick-line in one hour was tough. Then I had 45 minutes to not only redeem my appearance, disguising any signs of strenuous activity, but also perfect the choreography and perform in front of the judges.

What was involved in the final round of auditions?

They invite 60 new candidates to finals to join the re-auditioning veterans the following week. You have a 90 second solo and then perform the choreography and kick-line with veterans so they can compare your style of dance and flexibility to those with experience in the uniform. For the solo portion of the audition it’s important to portray individuality and present something the judges will remember. Naturally I danced to Down Under. I had to represent the Vegemite sandwich!

From the 60 new candidates and the 25 re-auditioning veterans, 45 were invited to a training camp. It was a ten-week process of learning 30 new routines, adapting to different styles of choreography, photo shoots, five-hour rehearsals, fighting fatigue, high kicks and pushing through injury, all whilst keeping a smile on my face and performing.

How did you feel when you made the squad?

The 2011-2012 squad was announced on the very last night of training camp. When the squad was announced, the exhaustion and fatigue were all of a sudden overtaken by emotions of excitement and accomplishment. The punishing, rigorous hours invested had paid off.

What’s involved in training when you’re preparing for a game?

There are many hours of practice that contribute to performing at a game. Our performance is a part of the Cowboys game day experience. We perform the traditional pre-game routine to AC/DC Thunderstruck at every game, as well as four routines throughout the game. Rehearsals leading up to a game will typically last anywhere between three to five hours, five nights a week. The Dallas Cowboys Cheerleaders are well known for precision and perfect timing. The long rehearsals ensure that we not only know the routines and our spacing, but also perform with confidence to the crowd, television cameras and photographers, to maintain the high standards of the Director Kelli Finglass and Choreographer Judy Trammell.

How much dance training is expected if you want to be a cheerleader in the States?

Dance training is not essential for cheerleading, but without a dance background there is no way I would have made it through the audition process. I grew up dancing at JDance Performance Studio in Sydney. One statement my teacher would always say to us has stuck with me all these years, “Practice does not make perfect. Perfect practice makes perfect!” It is very true to say that the way we practice is the way we perform. I kept these words of wisdom through my dance education at The McDonald College and excelled in various styles. This variety of experience has definitely helped with my ability to pick up choreography quickly, which is so important. The dance and cheerleading industry is very competitive in the United States so I would definitely recommend maintaining your dance technique and performance experience.

How important is flexibility?

Flexibility is a key component of the technique expectations from the Dallas Cowboys Cheerleaders. It doesn’t have to be the best, but it must be workable. The DCC are one of the only professional cheerleading squads that still perform their world famous kick-line and jump split at every pre-game performance. It is phenomenal and the crowd love it. If you have never seen it, I encourage you to look up videos on youTube.

Did your experience as a Manly cheerleader for the NRL prepare you well?

There are definitely aspects of being a Manly Seabird that prepared me for the audition process, and the performances at Cowboys Stadium. Dancing on stage, you are performing to people in the audience who are looking directly at you on the stage. Dancing on a football field, there are 50 metres of grass in front of you, between you and the fans in the front row. I am happy I had learnt how to ‘dance big’ and perform choreography to a large crowd. At Cowboys Stadium we have to project energy and power to the 100,000th fan in the top row.

How important is good diet and exercise when you’re a cheerleader?

A good diet and exercise are integral to cheerleading. Our uniform is very unforgiving and shows even the slightest fluctuation in weight loss or weight gain. We have such a busy schedule so it is difficult to eat regular meals, but after a year, I have adapted my habits to ensure I always consume sufficient carbohydrates and protein. Stamina and nutrition play an important role in your performance on and off the field. It is easy to burn out, or lose energy after two hours of practicing the same routine, and we dance for four hours at a game.

Besides dancing, what other forms of exercise do you do to ensure you’re in peak condition?

In addition to our rehearsals every night, I squeeze three to five sessions of weight training or boxing into my workout regime. Boxing is by far my favourite way to burn calories whilst having fun and punching out any frustration or stress.

What’s the best thing about being a Dallas Cowboys Cheerleader?

The best thing about being a Dallas Cowboys Cheerleader is earning the uniform. It is a recognisable icon and a part of history and tradition. Through the hours invested in the intense audition process, and the long rehearsal hours, I just remember the feeling of the first time I tried on the uniform. Words cannot describe how incredible it is. I still get goosebumps every time I tie my top, buckle my belt and put on my white Lucchese cowboy boots. I have been so blessed with this opportunity to carry the tradition as one of America’s Sweethearts – ‘The Often Imitated, Never Equalled, Internationally Acclaimed, Dallas Cowboys Cheerleaders’

Photos of  Angela Nicotera courtesy of the Dallas Cowboys Cheerleaders