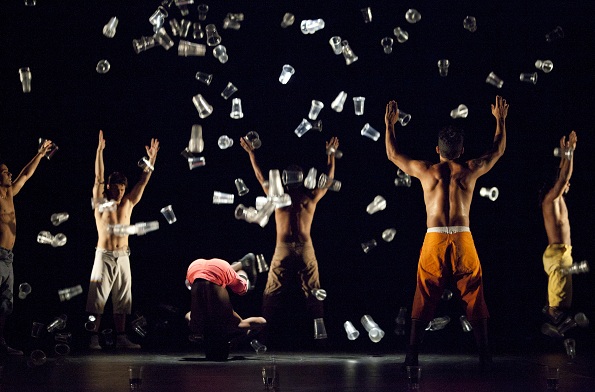 Spring Dance 2012 curator, Rafael Bonachela, was determined to provide a dance program that was both challenging and inspiring to a wider audience.  His aim was to demonstrate that contemporary dance can be accessible, engaging and “for everyone. Dance that is full of joy”.

This raw energy and joy at the heart of dance is evident in the two-fisted work of Correria (running), and Agwa (water) by French choreographer Mourad Merzouki.

Merzouki worked with Rio-based street dancers with the intention to bring their street energy to audiences around the world. In Merzouki’s words, “I didn’t want this dance to just stay on the street. I wanted to bring it to the theatre…use costumes and lights… because for me, hip-hop isn’t just for young people or for the street, it can be for everyone in the theatre.”

The first piece, Correria, explodes on stage with the thunderous percussion of well-known Brazilian song Magalenha, as the cast of eleven male dancers fuse acrobatics, capoeira, hip hop and circus arts to explore the theme of speed and running. With little in the way of sets or props the audience hears film reels rolling whilst a video backdrop plays a jerky silent film of a runner cleverly mirrored by one of the live dancers on stage. The music is an interesting mix of jaunty ragtime, electronica and gypsy music.

Whilst the predominant dance forms are street based hip hop, samba and capoeira, Merzouki seems determined to place the dance strongly on stage without the expected hip-hop music, competitive gesturing and fashion of the associated cultures. Instead, Merzouki seems to be inspired by the aesthetics and music of the silent movie and jazz era.

The dancers convey hip hop’s versatility as they bring a street-based freedom and inventiveness to music as varied as samba, bossa nova, ragtime, tango and even opera.

In contrast to Correria, the second piece Agwa, is more colourful, light-hearted and witty as it comments on the planet’s most precious resource, water. The piece relies on utilising a grid formation to highlight the malleability of water with the choreography following a parallel inventiveness.

Unlike Correria, with its dispersed and almost monochromatic mood, Agwa is a brighter, more optimistic piece where the choreography combines collective regimentation with intervals of individual dancer engagement with the audience.  The clever use of glasses of water as stage props and the absence of distracting video backgrounds makes Agwa the more accomplished piece.

While Merzouki is determined to bring the streets to life on stage and remove the more juvenile and commercial elements of hip hop culture from his work, the two pieces seem somehow diluted by the transition.

The removal of all traces of conflict and competition, also removes drama, creating works that undertake wide-ranging changes with no apparent development. Whilst being inventive in some aspects of its vision, the choreography is emotionally unengaging and seems to leave the task of emotional engagement and investment solely with the music.

Eleven male dancers with similar dance styles also remove any degree of dramatic contrast that both works may have accentuated. The limited solo and partner work doesn’t provide sufficient change in the performance dynamic as we wait in anticipation for the burst of passionate innovation to be unleashed.

It’s only during the final breakout piece where the dancers finally seem to revel in engaging the audience beyond the constraints of choreography that we directly experience the hinted freedom and joy in their dance.

One wonders if in translating the vivid language of contemporary street dance culture to the contemporary dance stage something was lost?