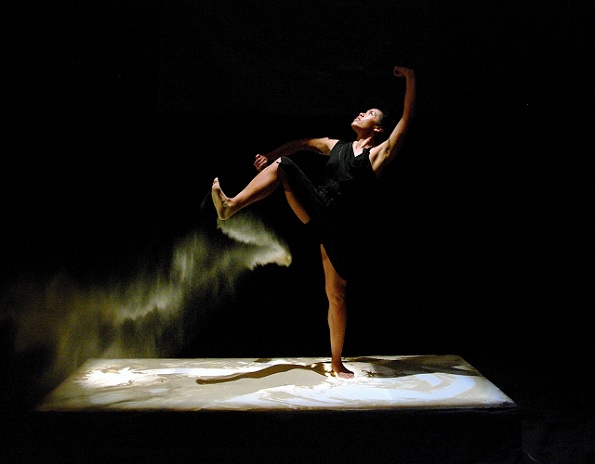 From the island of Java, via the deserts of Australia, Opal Vapour traverses the stage with ancient/modern rigour.

Picture this: a solo dancer performs on an illuminated Perspex stage where sand and light intermingle. Up above, an intricate shadow puppet play blends with live feed visuals; and all the while a solo musician weaves haunting Javanese influenced soundscapes into the spaces between. Such is the conceptually dense and vividly colourful world of Opal Vapour.

Dancer/choreographer Jade Dewi Tyas Tunggal has clearly brought the weight of both ancestral heritage and broad based training to bear on this many layered piece. Even a relatively ‘dumb’ question about the significance of the title elicits a thoughtful and detailed response. “I’m interested in the sense of transformation and change; and as a dancer and choreographer looking at how the body can experience and have a relationship with the world,” she begins abstractly.

As for Opal Vapour, “The title relates back to some of themes of the work, in terms of place, heritage and processes. Opal is a distinctively Australian stone and the process of creating it and capturing the quality of water, says a lot about survival, strength and power. And then you’ve got the opposite with vapour; the fragility.”

However, the work is no simple slab of choreographic Australiana because both Tyas Tunggal and composer Ria Soemardjo share mixed Australian/Javanese blood and Opal Vapour is steeped in the imagery and sounds of both islands. In addition, animateur Paula van Beek draws strongly on the motifs of Wayang Kulit (shadow puppet theatre) to create an overarching light design.

For Tyas Tunggal though, the work goes beyond simple ethnic fusion and seeks to investigate the notion of ritual. One of those rituals is performance itself. “I’ve been researching the heritage of performance and where it situates itself in society and culture”, she says. “Somehow with live performance we are affected. It’s like the metaphor of the tree, in that something has been planted and might potentially grow.”

While intellectualisations and investigations sound great in production meetings and interviews, artists working in this way always face the challenge of making their ideas work in practise. According to Tyas Tunggal, “It’s about gathering different essences of things and then re-weaving them together in different layers. So, with the Javanese shadow play, the Wayang Kulit, that’s really about playing with ideas of master and puppet, with the dancer being both.”

Weighty considerations aside, Opal Vapour requires Jade Dewi Tyas Tunggal to embody it all. She emits a faint laugh, before saying, “My training and technique has also been about filtering and classifying all my influences in a way that I can work quite intuitively and instinctively. So, I’ve been playing with this idea of relating natural, elemental forces with natural systems in the body.”

Sitting perhaps in ironic opposition to this is the light box that Tyas Tunggal uses throughout the show. “There’s something about working inside such a strong architectural space; in a way it’s like that idea of squaring the circle,” she explains. “It’s very north, east, south and west and it continually presses upon you. It keeps bringing you back to the idea of, what is performance? Where does it begin and how do I end it?”

Yet, in all this, (as with any dance worth watching), there remains something raw, something visceral. As Jade Dewi Tyas Tunggal concludes, “Both Ria and I are potentially very emotional performers but we are working on really nourishing ourselves through the performance and really trying to tune it so precisely that there’s space for the audience to feel. It’s a tricky question. It’s like the volume control … or like a campfire; you want to keep a sense of control on it.”

Like the fire in the stone, which is really an ancient water effect, Opal Vapour is a piece steeped in time and beautiful mystery. With its movement art aesthetic, ancestral roots and obviously contemporary media wizardry, it exemplifies not only the edgy ideals that lie behind Melbourne’s Malthouse Theatre Helium season, (in which it is included), but the rigorous and culturally eclectic approach of its creators.