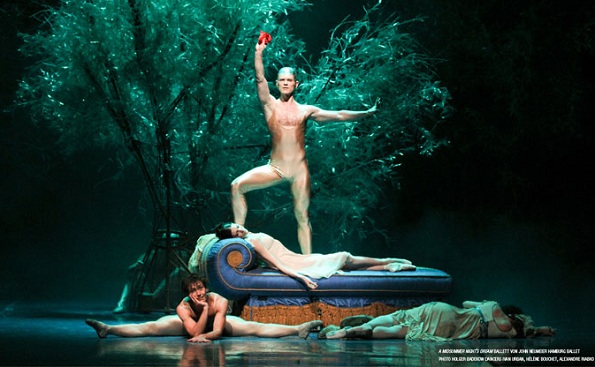 QPAC and Events Queensland in association with the Brisbane Festival continue to present challenging, innovative dance companies and their works to an Australian audience.

This year we have the pleasure of seeing for the first time in Australia, The Hamburg Ballet under Artistic Director, John Neumeier. The company will perform two ballets at the 2012 festival – Nijinsky and A Midsummer Night’s Dream.

Also on his first visit to Australia is Lloyd Riggins, an American who has lived and danced in Europe for 25 years, 17 of which working closely with Neumeier as Principal dancer and from 2006, as Ballet Master. From his home in Hamburg, Riggins enthusiastically talks to Dance Informa about the Hamburg Ballet, and the world-renowned recognition it owes to the artistic vision and sensibilities of Neumeier.

Since 1973 Neumeier, has kept the Hamburg Ballet at the forefront of international audiences, creating works not only for the Hamburg Ballet but also for such diverse companies as the Paris Opera Ballet, the Bolshoi Ballet, Britain’s Royal Ballet and the Royal Danish Ballet.

Riggins describes Neumeier’s pedigree as combining creativity, energy and humanity. He creates ballets that allow audiences to recognise themselves on stage and question their own responses, thus demonstrating that the myths of ballet can be both universal and timeless. Riggins cites the German word ‘Hingabe’, meaning devotion, commitment and indulgence – this is what Neumeier inspires in his dancers.

A second strand shaping Neumeier’s artistic vision is a respect for and love of dance history. Riggins explains, “Neumeier’s apartment is an enormous museum and library including a large collection of Nijinsky memorabilia.” No surprise that fundamental to Neumeier’s ideology is a key question, ‘How can you create something new unless you know where you have come from?’

In Riggins’ words, “Neumeier’s knowledge of the past is a vital part of the air with which we (the company) breathe. Drawing his influence from historical ballet, everything is interwoven, giving a solid support and interconnectivity. It’s all a big melting pot.”

Neumeier’s passion for history, including his particular passion for the Ballets Russes and the figure of Nijinsky, underpins the works to be presented at the 2012 Brisbane Festival. Although both classics, A Midsummer Night’s Dream and Nijinsky were chosen to demonstrate the great range of the company as well as its bridge of development.

Petrouchka for example, which Riggins has been performing since the early 2000’s, portrays a tragic and sensitive soul – Nijinsky broken after his split with the Ballet Russes, silently screaming at the war, the loss of humanity, trying to stop the chaos around him.

Nijinsky’s solo in Petrouchka has been recreated as faithfully as possible from archival information. The music of Shostakovitch, which includes the theme of war, sets the mood for a poetic stream of consciousness style of dance – it is also the starting point for Petrouchka’s distinctive hand movements, integral to the fabric of the ballet. The late Australian dancer, Paul de Masson in his capacity as Hamburg Ballet Master, worked with Riggins on the Petrouchka solo, in particular the hand gestures.

The second work to be presented at the Brisbane Festival will be Shakespeare’s great comedy A Midsummer Night’s Dream. This is one of the Hamburg Ballet’s most popular works, performed innumerable times around the world and demonstrating Neumeier’s ability to interpret classical works through variations in the music and narrative.

Using the three main strands of scenery, music and dance, Neumeier weaves a sumptuous and often hilarious A Midsummer Night’s Dream. He combines the wit of court life with ethereal fairy glens and ribald street comedy whilst distinguishing each strand with its own unique dancing style shaped by the composers Mendelssohn, Ligeti and familiar barrel organ folk tunes.

I ask Riggins what Australian audiences might expect of the Hamburg ballet, but he turns the question around – “it’s more about us, the dancers, doing as much as we can to reach the audience through this process of communication.”

But knowing Australia’s reputation for openness he does believe that we’ll be the perfect audience, “The more openness the better…with fewer preconceptions; more surprises. There are always surprises in John’s ballets.”