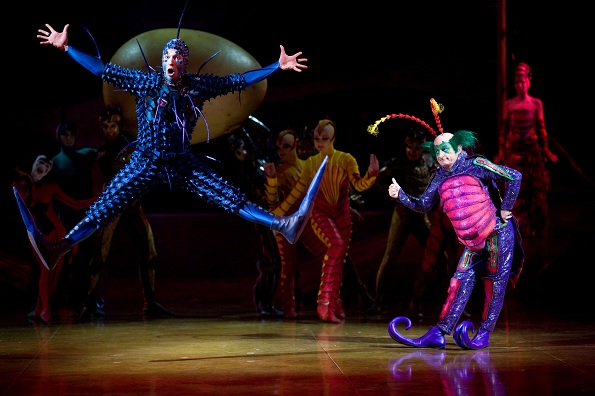 The new millennium circus boom has made acrobatics sexy and the creators of Quebec’s Cirque du Soleil extraordinarily wealthy. It’s also brought about a once unlikely marriage between the big top and the black box, so much so that the latest Cirque show to land on these shores is being steered by two female choreographers, Deborah Colker and Dutch born Marjon van Grunsven.

The show in question, Ovo, is an intricate insectoid love story featuring more than fifty performers, many of whom have been trained to “dance like insects.”

Speaking from Brisbane, where the show is currently playing, Ovo’s Artistic Director van Grunsven declares that circus and dance are natural companions. “Dance, like acrobatics, starts in a very technical way,” she explains. “You learn the steps, you learn the terms and you start to execute them; and then when you get really good at it you can start to explore and improvise. An acrobat will do his or her tricks just like a dancer would do a pirouette or any of their tricks.”

It is in the collision of physicality that the two disciplines coalesce; and under the blue and yellow grand chapiteau of Cirque du Soleil such pairings are not only possible but executed on a massive scale. According to van Grunsven, “It’s all about movement. Anybody can move and with Ovo it’s about circus tricks and movement. So, for instance, we say to our cast ‘move like a cricket’ and we go from there.”

In order to get into insect mode the cast buried themselves in endless documentaries and, says Marjon van Grunsven, visited “insectariums.”

Whilst that clearly represents a choreographic challenge for both Colker and vans Grunsven, working with acrobats unused to the more subtle exactness of dance turns out to be more liberating than limiting. “From a choreographic standpoint there is nothing more exciting than being able to work with bodies that can do more than you ever dreamt of being able to do yourself.”

As always, Cirque delivers spectacle, technical perfection and considerable daring, particularly when it comes to the flying acts. Given that Ovo is about insects, airborne athleticism is only to be expected. “So it’s our task to get these acrobats to move and dance,” van Grunsven says, “but at the same time we get this extra gift of being able to incorporate their tricks into our choreography. This is fantastic.”

For someone from a dance background the other enormous challenge is the sheer scale of the enterprise. Ovo has already been on the road for three and half years and clocked up over fifteen hundred performances. It’s hard to imagine a straight dance show running for that long non-stop without serious staleness setting in.

However, as Marjon van Grunsven has learned, the key to freshness is evolution. “We never say, ‘okay, this is it and it’s going to be like this for the next ten years.’ That’s actually a bit different from many of the big ballets. Nutcracker has been the same choreography for I don’t know how many years. Our show is the same in concept but we allow it to change; the steps aren’t specifically set.”

On a personal level, working on the same show since its April 2009 Montreal debut has forced Ovo’s Artistic Director to continually renew her inspiration. “It’s definitely challenging. I’ve gone through periods where I’ve thought, ‘okay, it’s time for a change’ but those moments only last for about a week.”

Having toured North America and played to a staggering two million people, Ovo leaves its home continent for the first time for an extensive Australian tour taking in five mainland capitols. With its trademark blend of circus trickery, big budget staging and family friendly theatrics, the insects of Ovo will surely pack out tents around the country.

From van Grunsven’s perspective, Ovo is far more than a well-choreographed circus. “We just wanted to do something with insects,” she recalls, “and perhaps renew for the audience a respect for the life of insects and for the earth.”

As it turns out, the show more closely resembles classical ballet than an Attenborough documentary, in that it has a magical fairy tale quality and a very clear narrative. “We just started off with an idea about insects and after we started working on it our three main characters – a lady bug, a fly and a beetle – just emerged and it was kind of logical after that that it became a love story.”

There is perhaps something apt about the show’s title, (which means egg in Portuguese), because the union of dance and circus should produce a very spectacular chicken – or in this case, very graceful insects.

For tickets to Ovo and tour information visit cirquedusoleil.com/ovo