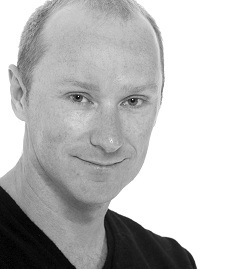 Opening to rave reviews in Sydney, An Officer and a Gentleman is continuing it’s packed out season. Part of its success no doubt lies in the choreography. Turning a Navy drill sequence into something for the stage provided a challenge for choreographer Andrew Hallsworth. Yet what we see on stage is something quite naturalistic and a true testament to the work of one of Australia’s most talented visionaries.

Here, Dance Informa chats with Andrew on the creative process behind the musical.

How did you find the experience of choreographing for An Officer and a Gentleman? Was any part of it challenging?

Well, what was challenging was the physicality of it. When the candidates go through their training program it includes lots of climbing, jumping, crawling on the floor, getting dunked under water, and gun drills. So that was kind of challenging but exciting at the same time. It was something I’ve never really done on stage before. And because I wasn’t going for a ‘dancey’ kind of version, like a West Side Story where the men all dance around the stage, I had to find a choreographed sort of physicality that looked naturalistic. That was really challenging. How many times does a push up look like a push up? Or an ab exercise look like an ab exercise? It has to look like something else because you’re doing a musical.

Had you worked with any of the dancers before on other productions? 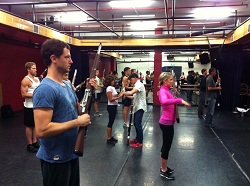 'An Officer and a Gentleman' rehearsals

How far in advance did you begin rehearsals?

We started seven weeks out from the opening, so we had four weeks in the rehearsal room and then we were in the theatre for three weeks. It was about seven weeks all up.

Is that generally how it works for other musicals?

It’s about the same. It’s usually seven to eight weeks. We started in March and we opened in May, and that’s the usual kind of set up for those big musicals. I’m doing a production company show in Melbourne at the moment and we have two weeks to get it up and running. We work really fast. You have to surround yourself with really good, experienced people.

Were you present at the auditions for An Officer and a Gentleman?

Yes, I sure was. We workshopped it over two years leading up to when we opened. We did a big workshop in Melbourne, and then we went to New York and had a workshop there. And then just before we started rehearsals, we just did a mini workshop which was with actors around the table to hear the flow of it again, and the auditions happened before that. Probably six months leading up to the opening. So it’s been a two-year process.

Do you think Australian musicals are on the same level as what you see on Broadway? Or is Broadway on a much grander scale?

It’s on a grander scale because there are so many more shows there. You go to New York and you see that the whole midtown area and every street has got three theatres on it on either side of Broadway. Clearly it’s the mecca where musicals were born and they do it the best there, without a doubt. But Aussies are as strong as the Americans are. Our production of Priscilla in Australia was just as strong as the Broadway production that’s just about to close. But there’s just that Broadway thing….I don’t know what it is. It’s that whole midtown section and every night there’s billboard after billboard, so whenever you see a show there, you’re just so enraptured in all the musical theatre around you. It just makes everything much grander and more professional. As far as talent goes, I think there’s just more dancers there. When you audition in New York you see dozens and dozens and dozens of people for one particular role. There are just so many shows there and so many more stars.

Having started out as a performer, do you prefer to be on the other side of the creative process and be involved in choreography?

Yeah, I do.  I loved performing in shows, but even when I did my first show when I was 17, I was interested in the process of how they built the musical up. I’d always watch rehearsals even if I wasn’t in the dance routine. I’d always sit in and watch. I was never interested in being a leading man or anything like that. As soon as I had a few shows under my belt, I started wanting to be a dance captain and wanting to be an assistant and just that general progression towards going ‘well I like choreographing, let’s see whether this is going to happen or not’. I was lucky enough to align myself with Ross Coleman who kind of mentored me for 12 years, and then I was choreographing my own shows. Having him there and pushing me opened a lot of doors to what I’m lucky enough now to be able to do. It’s always been something I’ve been interested in.