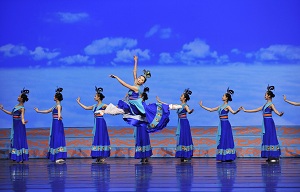 Direct from New York, one of the world’s premier classical Chinese dance companies is proud to present an all new production of Shen Yun. Performed to a live orchestra, Shen Yun dance spectacular highlights a revival of 5,000 years of civilisation from April 27 to May 6 at Sydney’s Capitol Theatre.  The show just previously toured to Auckland, Wellington, Canberra and Melbourne.

For 5000 years, China amassed a diverse legacy of heroes, myths and virtues that still resonate in the present. Today, Shen Yun Performing Arts is reviving the world’s most ancient heritage in full colour through dance and music. Shen Yun captures the spirit and grandeur of a culture long lost. The show moves quickly from one story, region and dynasty to the next. Down in the valley, ladies of the Yi ethnic group dance in rainbow skirts by the river. In the heavens, celestial fairies trail silken sleeves through the clouds. Resounding drums awaken the dusty plateaus of the Middle Kingdom.

After watching last year’s performance, Academy Award-winning actress Cate Blanchett said, “It was an extraordinary experience. The level of skill, but also the power of the archetypes and the narratives were startling. And of course it was exquisitely beautiful.”

The Shen Yun Performing Arts presentation of Shen Yun features gorgeous digital backdrops that extend across the full stage, transporting the audience to distant lands and eras. An orchestra, combining Western and Chinese instruments like no other, accompanies the dancers with stirring scores. Dancers fly across the stage in an array of flips, spins, jumps and aerials. The energy of classical Chinese dance is contagious.

The Shen Yun lineup of dance and music has been performed to acclaim in more than 100 cities worldwide. At the core of their performances is classical Chinese dance, but China’s numerous ethnic and folk dance styles round out the evening along with masterful vocalists and musicians.

Experience a blend of energy and grace with Shen Yun Performing Arts at the Capitol Theatre, 13 Campbell Street, Haymarket, Sydney from Friday 27th April to Sunday 6th May. For tickets and information call 1300 723 038 or visit www.ShenYun2012.org.