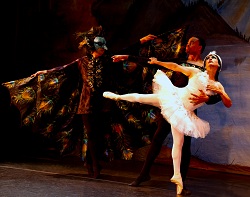 New York’s Les Ballets Eloelle (L-O-L, get it?) pirouetted into Melbourne with its cast of male “ballerinas” to show local audiences that men can be swans and do pointe work too.  This is no Matthew Bourne contemporary take on ballet, however.  This is pure ballet, with the (mostly) original choreography taken from selected classical ballets performed by men.  In tights.  En pointe.  In tutus.  On this particular outing, the programme included Act 2 from Swan Lake (hilare!) and excerpts from Le Corsaire (virtuosity!), closing with a mash up of Don Quixote (amaze!) and Paquita (astonish!).

The appeal of companies such as Ballet Eloelle and the Trockaderos can be limited.  Are the men dancing the female roles with seriousness when not obviously being frivolous?  Are the men good enough to pull off difficult variations en pointe, not to mention the fouettes in almost every pas de deux coda?  And for the general audience, will they get the humour?

Fortunately, the answer to most of those questions is yes. While mainstream audiences may miss the subtleties that only a ballet lover can pick up on, there is much laughter and awe to be had for everyone in this production.  There is slapstick, visual gags, feats of awe (are you sure they are really men?!), and some genuinely good dancing.  As any female that has squeezed their feet into a pair of pointe shoes can attest, pointe work sure ain’t a walk in the park, but the dancers of Les Ballets Eloelle pull it off with ease (and a flourish of the wrists).  Despite all that, some of my favourite moments from the show were non-balletic, such as when a swan breaks out into a bit of krumping, and when the token “male” dancer turns to the back of the stage and tightly squeezes his butt cheeks to the glee of the audience…

Les Ballets Eloelle managed to gracefully side step the trap of leaning on sight gags to entertain the audience.  The humour was clever, the performance was hilariously entertaining, and the dancers were impressive.  I can’t wait for the company to return to Melbourne with the next programme.  This time I’m bringing tissues for the tears of laughter.