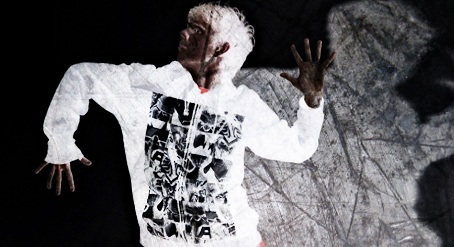 There are many ways to review a show but most involve name dropping, encapsulation and a measure of what we might call analysis. Ultimately however, reviews are simply one person’s considered and (hopefully) informed opinion. This is no different. But for me at least Collide was.

Not that the two short works contained under that umbrella were ground-breaking in any way. Indeed, a dance cynic may well dismiss the programme as nothing more than standard issue, over wrought contemporary writhing. However, to do so would miss the point entirely.

Stepping away from the details though, Collide reminds us why anyone bothers to dance at all, for right there in front of us the dancers give us their blood by diving headlong into the moment and immersing themselves. Perhaps it is a kind of self-absorption – but it’s also utterly absorbing. And in the pews, everyone imagines themselves dancing.

Sometimes, the astonishing alchemy of music and movement transcends technique, and makes critique redundant. For this reviewer – on that night, in that theatre – the collision was pure elevating, emotional magic. By daring to feel, the dancers allowed us to do the same. By having the gall to dream up such intense (and gloriously minimal) vignettes, Paul Malek and the driven young people he works with remind us that everyone is a dancer.

Well, that’s enough of my middle age gushing. Go see the show … or at the very least keep an eye out for their next one.