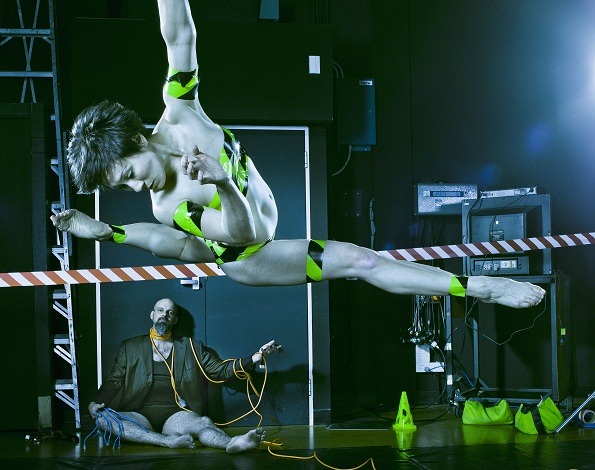 Emerging South Australian dance theatre and education company, One Point 618 will present a world premiere production, Involuntary, at Adelaide’s Space Theatre from May 1st to 5th. Directed and choreographed by renowned dance artist Katrina Lazaroff, Involuntary looks at how society is preoccupied by the pressures of life, consumerism and regulation. In the lead up to opening night, Dance Informa spoke with Lazaroff about her new work and her plans for the future.

What was the inspiration or motivation for Involuntary?

Well, just as with my last work, Pomona Road, I began with a stimulus that in the end didn’t continue through the work. I was watching my mother-in-law watch football.  Her body was reacting unconsciously to her experience and she was throwing herself around the room.  I thought it was hilarious and I could really make a work about this.  Also, when my daughter Zoe was very young she made lots of involuntary movements that were sporadic, crazy movements.  It was these two things that inspired me to make a work called Involuntary.

The first was a workshop scenario, when I set aside an hour after teaching class at Ausdance each week and invited people to work with me and test out ideas.

The second development was a showing in Ausdance’s Choreolab.  By then I released I needed extra substance for the work if I wanted to attract grant funding.  I needed to make a societal connection.  The bureaucracy involved in applying for grants was so frustrating.  That’s when I started thinking about how much we have to do in society to be a part of society – things we don’t really believe in, the rigmarole, the red tape.  We do this involuntarily so we can operate in society.  We go along with the rapid pace of technological advancements, which may not always be our choice.

In the third development I looked at the influence of media and subliminal advertising.  I didn’t want the piece to be just about technology.  I wanted it to be about the actions, often unconscious, that we do each day to survive in society.  After the third development, I realised I wanted to look at a lot of things we were unconscious about. The things we just do, rather than the things we choose.  I wanted to look at how we react to having to talk to computers and phone prompts, when all we want is to talk to a real person. 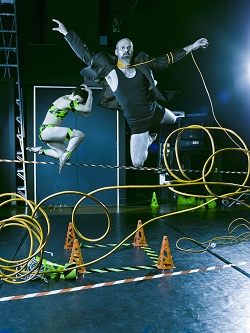 My original idea was abstract and humorous.  And though I’ve thought more seriously about societal issues, I don’t mean to be dark about it.  It’s a satire.  I want to get people to think.

What is it that drives you to create work with a social connection?

I need to make work that says something, that speaks to people, that is more than just my own personal aesthetic or artistic concept.  I want to make work that a broad range of people connect to.  I want to bring people to the arts, to show that performing arts is a broad medium to share thoughts and feelings.

Involuntary is very socially relevant.  Everyone can relate to it and their own involvement in society.  People laugh when I mention I’m making a satire about that.  My last work, Pomona Road, was a story about a family.  Involuntary comes from a very different place.  It has a cold, contemporary side to it, but it’s about what we go through as people.  I want to create work about what everyone experiences.

What has been the most satisfying part of making Involuntary?

The dancers I’m working with are just amazing.  It’s been quite a process to cast the work properly.  I feel I have the right group and artistic team around me.  They are so wonderful and open to my ideas.  It is just so exciting.  I really want to go to work and share everything with the team.

I feel like I have something important to say and I feel happy about that.  I’m glad I’m making social comment.

What has been the most challenging part?

Trying to work out the right team.  Initially I saw it as a really technical dance work, but it has become a more theatrical work where I need people interested in theatrical aspects, rather than technicians.

I didn’t attract the funding I’d applied for, which meant the dancers I worked with through the three development phases kept changing.  I worked with young graduates, and then really technical dancers.  In the end, I realised what I needed was dancers who were open to speaking and using their voices, as well as with technical skills.

I’ve learnt I need to work with people that I’ve have worked with for some time, like Tim Rodgers and Veronica Shum.  It’s like coming home.  They understand me and I don’t have to start from ground zero again.  A lot of young dancers across the country wonder why choreographers use the same dancers all the time.  But it is about trust in making work that means something to you, and knowing the dancers get where you’re coming from.

How have you grown as a choreographer with Involuntary?

I think I’m getting better at refining ideas, including movement, thematic and conceptual ideas.  I can sift through things and decide quickly if an idea will work or not.  I’m better at trusting my instincts.  I’m trusting in my movement making ability again.  I was a performer for so long, then had a child, and along the way lost some of my trust in my instincts.  Self doubt is going away, and so I can hone into the process and practice.

What’s next for Katrina Lazaroff?

I plan to tour the three works – Involuntary, Pomona Road, and Skip, and create a new work.

The working title of my next work is Prison.  It will be a dance theatre piece that invites different mediums.  I started looking at people in confined spaces.  I’ve always been fascinated with small spaces and people’s rituals in small spaces. I’ll look at people’s behaviour in prison – it’s incredible how people survive in confined spaces.  The work won’t mimic prison as such, but will look at the prison of our own minds, and the way we imprison ourselves through the way our minds operate, and how we don’t allow ourselves to be free much of the time.

Essentially, I want to focus on getting my work out nationally and regionally.  I want to share it.