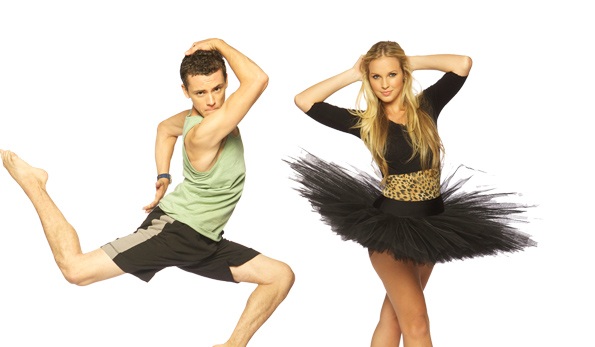 As dancers across the country are enjoying season two of ABC3’s hit dance drama, Dance Academy, Dance Informa spoke with two more of the shows young stars – Alicia Banit who plays ‘Kat Karamakov’ and Tom Green who plays ‘Sammy Lieberman’. Tom spoke with Dance Informa directly from Los Angeles as he is keeping busy filming a pilot season for another show in the States.

If you didn’t see our interviews with co-stars Jordan Rodrigues and Dena Kaplan, click here.

What do you enjoy most about Dance Academy?

Alicia
Dancing and acting have always been my favorite things and with this show I can do both! It’s my dream job.

Tom
Being part of something so original and well received, and having people contact you and tell you it has positively influenced their life in one way or another.

Did you enjoy filming season two?

Alicia
Season two was an absolute blast to film. It was great to be back with the cast and crew from season one and the new cast mates just heightened the love. It’s awesome to have a group of people with the same passion and that get along so well. It makes the whole experience so enjoyable.

Tom
Season two was a lot more fun than season one. Purely because we all knew each other much better than the previous season, we had better storylines, better routines and we were all much more familiar with our characters and their journey.

Do you relate to your character?

Alicia
I absolutely relate to my character. Personality wise Kat and I are very similar with us both being the life of the party and quite quirky, but Kat deals with some family situations that aren’t ideal for her and I’ve always had a very close and loving family around me. Kat is more of a rebel than I am so it’s fun to be able to bring that side of me out through Kat.

Tom
Sammy and I both have a similar sense of humour, so I can relate to that, as well as his determination.

Tell us about your dance background.

Alicia
I’ve been dancing since I was four at T-Jam Dance School doing tap, jazz, ballet and hip hop. At the age of 12 I got a scholarship into The Victorian College of The Arts Secondary School (VCASS) and learnt new dance styles like contemporary, character and acrobatics. I’m now 21 and I still haven’t stopped dancing!

Tom
I started dancing when I was about 11 or 12 just because my sisters did it. Plus, at the time I was singing a little so I needed to know how to move on stage. I trained at the Joanne Grace School of Dance in Wollongong, NSW for about eight years in ballet, contemporary, jazz and modern. Once I turned 16 I would catch a train up to Sydney every Saturday for a hip hop class at Urban Dance Centre.

Alicia
I love hip hop and during the second season of Dance Academy I rediscovered my love for tap! They are both such free dance styles and allow you to bring your personality into them.

Tell us about your acting background.

Alicia
I started acting at the age of 6 when I got a small role in a film called Dead Letter Office. After that I did lots of comedy skits on shows called I.M.T (In Melbourne Tonight) and Rove. I stopped acting for a little while when I really focused on my dancing and then at the age of 16 I started up again getting roles in Summer Heights High, Neighbours, As The Bell Rings, Rush and Tangle. Then finally I got my dream job on Dance Academy!

Sammy (Tom Green) dancing in a scene from Dance Academy

Tom
I had always been involved in plays and shows at school and at the local theatres as a kid. When I was 12 I was accepted into a drama group called Kids Casting Agency where I would learn drama exercises and theatre sports every Saturday for a year. At the end of the year I left the group and went back to school but I was still getting called in for auditions. I booked my first job when I was 16 on a telemovie called Emerald Falls which unfortunately never got picked up. After that I went back to school and ended up auditioning for a short film called The Ground Beneath and was lucky enough to score the lead role. That film opened a lot of doors for me and my career; I signed with an agent, won several awards around the world and got to work with some industry professionals on other jobs.  Since then I’ve been lucky enough to have worked around the country on a couple of feature films, short films, corporate films, TV shows and commercials.

If you weren’t cast in Dance Academy, what would you like to be doing?

Alicia
I’d love to still be acting and dancing. I’d probably be in America auditioning for films and shows over there.

Tom
If I wasn’t cast in Dance Academy I would have probably gone back to school and finished year 12. If I wasn’t acting I have no idea what I’d be doing. It would have to be something in the arts.

What advice would you give to young dance/acting hopefuls?

Alicia
The advice I always give is to never give up. The performing industry is tough and cut throat and there are a lot of rejections. You have to not take that rejection to heart and concentrate on your goal. Do as many classes, auditions and performances as you possibly can to get your confidence up and always believe in yourself.

Tom
You have to work extremely hard in both fields if you want to pursue them as a career. If you want to dance, don’t just stick to the same styles, go out and learn new things from different teachers at seminars or workshops. If you want to act, watch a lot of classic films, become familiar with techniques, actors, directors and photographers. Experience as much as possible.