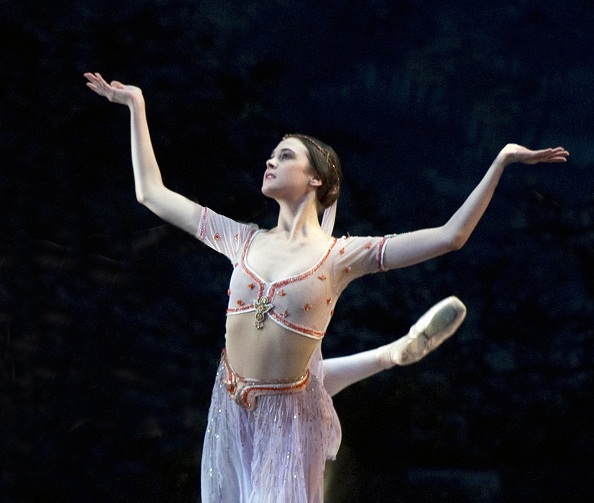 Australian dancer Stephanie Williams has gone from strength to strength since leaving The Australian Ballet in 2011 and joining Het Nationale Ballet in Amsterdam for six months before settling into her new home of New York where she is one of American Ballet Theatre’s (ABT) newest recruits.

Since commencing her ballet training at the age of 8 with the Marie Walton-Mahon Dance Academy in Newcastle, Stephanie has been a dancer to watch.  Moving to Melbourne as a teenager to train at The Australian Ballet School, she received the Gold Medal at the 10th Asian Pacific International Ballet Competition in Tokyo, graduated at the top of her class, and performed the dual role of Odette/Odile in Swan Lake.  In 2007, Stephanie joined The Australian Ballet as a Corps de Ballet member before being promoted to Coryphee the following year.  While with The Australian Ballet, Stephanie performed many Soloist and Principal roles and was a guest artist with Christopher Wheeldon’s Morphoses, again performing Principal roles.  2009 saw Stephanie work with choreographer Wayne McGregor on his new piece Dyad 1929, and become the youngest ever winner of The Australian Telstra Ballet Dancer of the Year Award and People’s Choice Award.

In the lead up to the world premiere of Ratmansky’s Firebird in California, Stephanie found time to speak with Dance Informa about life since leaving Australia…

You’ve done quite a bit of travelling lately, having gone from The Australian Ballet to Het Nationale Ballet in Europe, and now with American Ballet Theatre in New York. How are you managing so far away from friends and family?

The past year has been a whirlwind of travel, exploration and life change. At times it’s been wonderful and exciting and at other times scary and daunting, but all part of an incredible journey that has given me a fresh perspective on life and dance. The beautiful people that have come into my life have had a huge impact on me and they have helped me with the major changes that come with moving to the other side of the world. I have to say I am extraordinarily fortunate to have the most beautiful, supportive family whose love and belief in me has never wavered, even when I’ve felt lost at times. And although I miss them terribly, I am in an extremely positive, motivating, passionate and inspiring environment every day at ABT. This fills me with a sense of happiness and allows me artistic fulfillment, of which I couldn’t have ever imagined and appreciate so much. And thank goodness for Skype!!

New York is incredible in that I feel like it’s so open to different styles and foods and that’s why it’s so exciting because there is always something new and interesting to try and seek out. I’m not a good sleeper so the fact that I live in ‘The city that never sleeps’ works perfectly for me!
Amsterdam is like no other place, with canals and bikes everywhere you look. I used to love seeing an entire family on a bicycle – the mum riding with the two kids on the front, baby in arms, perhaps an umbrella and mobile phone in hand and some groceries hanging off the handle for good measure. All executed without a care in the world! And then parked amongst another hundred bicycles so the street looks like a twisted metal junkyard! What a truly amazing sight and the epitome of Amsterdam.

Do you notice differences in European and American dancers compared with Australians?

There are definitely differences in dancers from Europe and America compared to Australia and I think a lot of it comes down to training and cultural differences. But what I think is amazing about dance is that it is universal. All around the world there are inspiring artists expressing themselves through movement and to me I feel that it is such a special, beautiful way to share one’s emotions. No matter your training, background or where you’re from, each individual has his or her own unique way of expressing that through dance. That is incredible.

Did you have trouble securing a Visa to work in the US?

I was actually very lucky with securing my Visa. ABT helped by petitioning on my behalf and they required a lot of paperwork from my time dancing with Het Nationale Ballet, Australian Ballet and Morphoses The Wheeldon Company, so my mum was an absolute hero and compiled everything and sent it to ABT. Once my petition was approved I secured my Visa. It has a name which I love. Apparently I am an “Alien with Extraordinary Talents”! I then just had to go to the US Consulate in Amsterdam, but was very lucky with how smoothly it all came together.

Is living in New York and dancing in one of the world’s best companies a dream come true?

I have to admit I do pinch myself most days. I have found a happiness and an appreciation for what I am fortunate enough to do every day. Living in New York is incredible. It is a city to get totally lost in, to explore and to dream. American Ballet Theatre is a very special organisation and to be a part of it is very humbling and inspiring. But over the course of the last 15 months I have grown up a lot (as stereotypical as that sounds). I have found such beauty in people, places, dance and life and to be able to recognise and appreciate it. That, to me, is the dream I have journeyed to.

What shows do you have coming up with ABT?

At the moment I am in Costa Mesa preparing for our triple bill which consists of Merce Cunninghams’ Duets, Christopher Wheeldons’ 13 Diversions and the world premiere of Ratmanskys’ new Firebird. I will be dancing in 13 Diversions and Firebird which I am really excited about! Being involved in the creation of Firebird has been incredible and inspiring each and every day. Working with Ratmansky and seeing this ballet come together has been amazing and I’m so excited about the premiere this week!

Will Australian audiences see you on stage at home in the future?

I really hope I can come and dance in Australia sooner rather than later, so I will definitely be looking at how to make that happen.