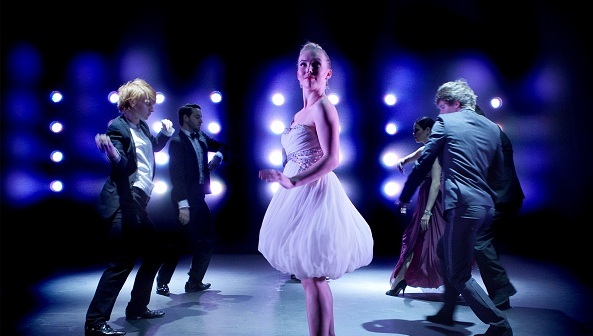 Stephen Agisilaou is no ordinary dancer. His idiosyncratic journey from ‘loungeroom’ dancer to company director is one of Australia’s most refreshing and inspiring.

The rules do not apply to everyone. Take Stephen Agisilaou. He started dancing at eighteen and now, barely a decade later, has danced professionally here and overseas and fronts his own company.

When Vertical Shadows’ two latest works, the pas de deux Crimson and the larger scale On The Rocks take to the boards in May, Artistic Director Agisilaou will once again be living his maverick dream of narrative driven, theatrically inspired contemporary dance. Although he may not be the first to try this particular sleight of choreographic hand his self-taught insights into the marriage of strong theatre storylines and the beautiful abstractions of dance will doubtless be sitting at the heart of both works.

“It wasn’t so much choreography that I enjoyed but directing,” he says, recalling the original idea behind Vertical Shadows. “I enjoyed coming up with concepts.”

As a template for getting dance productions up to speed it sounds upside down. “The chorey kinda comes last,” he cheerfully declares. “I really blueprint the story and the staging first before we ever get into the studio to choreograph. The direction is at the forefront; but because I put so much into the process of the story telling, the chorey sorta comes easily.”

However, Agisilaou is adamant that it is still dance. “It’s not theatrical in the sense that the dancers are playing human beings with personalities,” he explains. “It’s a contemporary piece, so it is abstract. But we do give the dancers direction about character and motivation sometimes.”

For company dancer Jayden Hicks, who appears in On The Rocks, the extra character background is clearly useful. “It’s always better to have a thought behind the movement, either from yourself or given by the director. You need an inner story. Whether or not the audience can tell what you’re doing they can tell from your face that you’ve got intention, that you’re dancing for something and not just for dance.”

It’s an important distinction and something that Agisilaou keeps in focus as he tries to stay on the right side of the dance/mime line. ‘Character’ motivation and narrative intention are restrained by the desire to create non-literal and more emotional forms of theatre.

For a piece like On The Rocks the challenge is to find a way of letting the audience see and feel the heroine’s situation without telegraphing it. Jayden Hicks is confident that the back story will be evident. “With the high divorce rate now and marriage just so disposable, I’m pretty sure that the audience will get the idea of this woman contemplating a separation,” he begins. “Everyone can understand what she’s going through. Y’know, she’s wondering whether she’ll be alone, or whether there are other fish in the sea – all that stuff.”

If that sounds like a crisis of middle age, Stephen Agisilauo’s “18-25” cast may well be fortunate enough never to have crossed such bridges. As their director though, he is less concerned with life experience and more about presence and potential. “Mostly I need the cast to understand who they are in any space, at any stage, at any time,” he elaborates. “The show is not the kind of show where they need to be military in the way that things are put together, or exactly the same at exactly the same time, but because they are a young cast the progression and development rate should be quite high.”

Meanwhile, Jayden Hicks offers the following insight. “He’s a great director in that he lets you feel that you helped him to create the show. I mean, it’s his way or the highway but he’s not obnoxious about it,” he concludes with a grin.

It’s been a remarkable ten years since his father casually asked him if he wanted to take dancing lessons. Agisilaou has gone from self-taught ‘loungeroom’ dancer to company director, via a stint with Move The Company in Canada and choreographic guest spots on SYTYCD. Sometimes it’s hard work and graft that pays off, other times its inspiration that wins out.

Laughing at his ‘boss’ Jayden Hicks simply says, “I actually started dancing before Stephen.” Now that really tells you something.

Win a Double Pass to On The Rocks!
Just email info@danceinforma.com and tell us “Why and When You Started Dancing”.
Please include your full name, date of birth and postcode. Good luck!
Competition ends May 4.