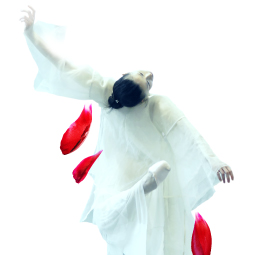 The Peony Pavilion is a love story that takes place within a dream. Du Liniang, a beautiful woman from a wealthy family, falls asleep by a peony pavilion and dreams of a handsome scholar whom she has never met. Unable to find him in the real world, she dies of a broken heart and ends up in the Underworld. Her story moves the Infernal Judge to release her ghost back into the land of the living to find and marry the elusive scholar. The ballet ends with an unusual wedding ceremony fitting for the union of phantom and mortal.

The performers are a joy to watch and the strength of the corps de ballet is noteworthy. The principal dancers demonstrate their fine-tuned technical and dramatic abilities admirably, and the fluid execution of the first act pas de deux between Liniang (Zhu Yan) and her lover (Li Jun) captures beautifully the artless passion of first-time love.

Similarly, the concept of using three dancers to portray one character is potentially confusing for the uninitiated. The role of Kunqu, the operatic vocalist, who represents the heroine’s moral restraint, is particularly difficult to place without referring back to the programme. Unlike the Flower Goddess, who represents the heroine’s passion, Kunqu’s movements do not explicitly link her to the heroine and her unfamiliar lyrics, sung in Chinese, are of no help to western audiences in making such leaps of imagination.

The second act, including both the Underworld and wedding scenes, is structurally far clearer than the first, which possesses a quality of sameness that does not match the drama of the plot.

Despite the size of the State Theatre, the stage feels crowded with dancers in several scenes of the first act; whilst the principal dancers manoeuvre past each other admirably, one unfortunate corps de ballet member proved the victim of circumstance on the opening night and fell during one of the ensemble’s opening sequences in the first act. The production, however, is evidently very well-rehearsed and no doubt greater familiarity with the stage will prevent such a mishap in future performances. The second act, meanwhile, proved lucid and engaging.

The final wedding scene is the show’s stunning highlight. It takes place in front of a translucent, grey-white backdrop – a liminal space somewhere between Heaven and Hell – as figures from the two realms circle the young lovers performing repetitive gestures in a bizarre ritual. The pace and volume of the ceremony intensifies until finally, red peony petals fall from the sky in a rousing climax. The sustained and streamlined build-up of this scene in terms of orchestral and ensemble strength and pace is at the heart of its effectiveness.

Ballet clichés were somewhat overused throughout. Whilst this may have been a result of an attempt to incorporate the essentialism of Chinese operatic convention – for instance, in emphasising demure nature of the heroine characteristic of the zhengdan (tragic or serious heroine) – it nonetheless detracted from a full realisation of the choreographic potential of the storyline. Though choreographer, Fei Bo, possesses a background in contemporary dance, there is little evidence of this in the ballet, which is fairly traditional in its movement vocabulary.

Overall, however, The Peony Pavilion is an enjoyable, high-standard production and a unique showcase for the world-class talents of the National Ballet of China. As a Chinese love story in the vein of Romeo and Juliet, it has a broad appeal despite the unfamiliarity of various elements related to operatic convention and Chinese metaphors used throughout, and ballet-lovers will find this production well worth their patronage.