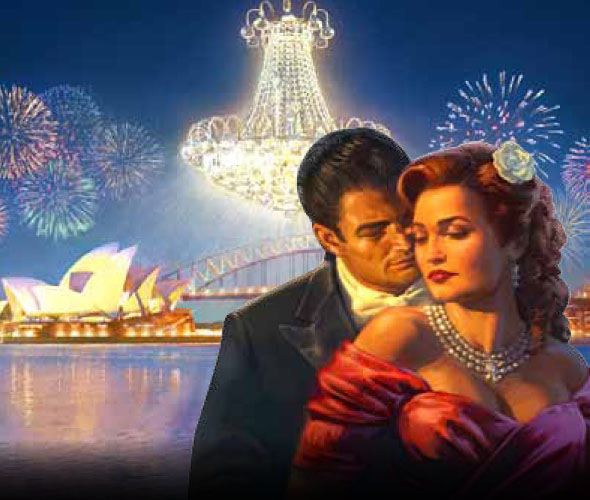 Thursday 22nd of March, media were treated to a rehearsal of Opera Australia’s La Traviata. Set at Mrs Macquarie’s Point in the Royal Botanic Garden, Sydney, the ultimate romantic opera tells the story of the ‘fallen woman’ or more figuratively, ‘the woman who goes astray’.

An impressive infrastructure installed on Sydney Harbour captured the huge production of Handa Opera’s La Traviata. Guests were invited to view spectacular sets, beautiful costumes, fireworks and a 9-metre chandelier sparkling with Swarovski Elements, suspended above a purpose-built shimmering stage on the waters of Sydney Harbour.

La Traviata is perfect for first-time opera-goers and was a visual treat, despite the poor weather conditions at hand. Due to an onslaught of rain, the production was delayed quite considerably, and when the rain finally eased off, the audience were only able to view a select few acts. Wearing black tie didn’t seem to matter much, when blue ponchos emblazoned with the Mazda logo were being thrown out left, right and centre. Considering the amount of money spent on the production, one would think that some form of shelter, even for the performers, would have been provided. Whilst my guest and I found it quite humorous to be watching Opera in the rain, one could not help but feel sympathetic towards the performers whose costumes seemed to already be ruined by the end of the first short act.

For what we did see of the dancing, Stephen Baynes delivered what you would have expected – great choreography. It was obvious that the dancers were required to possess solid technique and training in classical and contemporary styles. Having seen the dancers rehearse prior to the night, at the studios of Opera Australia, it was a delight to see the finished product.

Emma Matthews, who played the role of Violetta and Gianluca Terranova in the role of Alfredo Germont, did not disappoint either. The vocals were simply incredible.

Overall, despite the poor weather conditions, all had a great night. Delicious catering of gourmet pizzas and champagne ensured guests were kept happy and entertained.