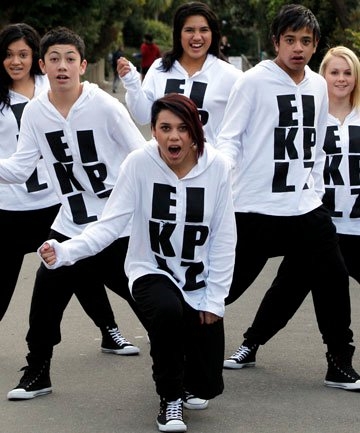 From its 1970s origins on the streets of South Bronx, New York City, hip hop is now thriving the world over. Dance styles associated with this culture – from breaking to popping, locking and krumping – are hugely popular in New Zealand, and Kiwi dancers are bringing a unique flavour to the table. Here David Eng looks at some of the best hip hop crews across the ditch.

These outstanding results are largely thanks to the choreographic and teaching skills of 19-year old Parris Goebel, who was guest teacher at last year’s Australian Dance Festival. In conjunction with her father, Brett, she runs The Palace, a dance studio in Auckland, where the winning crews train.

ReQuest, an all-female crew, took home Gold in the Champs in 2009 and 2010. They also made their way onto Season 6 of Randy Jackson’s America’s Best Dance Crew late last year. This is an incredible achievement, as ReQuest were the first group ever outside North America to be selected for the show, beating out as many as 400 crews in the auditions. According to Brett, this was a great way for the world to see New Zealand’s hip hop style first-hand, and to discover the “fierceness and strength of our culture, intertwined with its beauty.” (To see Dance Informa’s interview with ReQuest click here)

THE COMPANY
Competing alongside The Palace at the World Champs was the Wellington-based crew known simply as The Company. Under the guidance of Creative Director and ‘dance guru’ Ben Uili, with his flawless choreography, The Company have taught a number of groups with dancers as young as 8 years old . They have also worked just as hard to compete with some of the greatest dancers in the world.

Assistant Director Sophie Evans says that the dancers have all sacrificed a lot to have come this far, but it has all been worth it. They have relied heavily on each other to keep energy levels up. When they perform live, it’s easy to see how hip hop dance brings people together to create an electric atmosphere on stage. After winning numerous titles at local and national championships, the chance to compete in Las Vegas was a once-in-a-lifetime opportunity for many of the dancers.

DHS
Of course, it’s not all about winning competitions. Throughout NZ, hip hop is commonly used as a way for kids to develop important life skills in a supportive environment. This was Darney Takao’s main intention when he started Darnz Hip Hop Salsa crew (DHS) in October 2005, as a non-profit organisation catering to kids aged 5 to 17 .

Darney focuses on training young students to become future leaders, representing the South Island communities of Nelson, Christchurch and Dunedin. DHS aims to provide a positive environment for kids to grow and learn, using a style of hip hop fused with salsa and rock ‘n’ roll to bring out their potential. It was never about the money; as Darney says, it’s more about  “not just what we can do for them now, but for the future as well.”

URBAN BEAT
Although DHS has competed in a few competitions before, such as the Street Dance NZ National Championships, it was more as a reward for the kids – something positive to strive for.  South Auckland-based crew Urban Beat has similar objectives. They are all about bringing the community together, both young and old.

Driven by her own passion and love for dancing, Tui Manuel started this programme from her own pocket, teaching hip hop to all ages. Over the years her outfit has expanded to perform in music videos, youth prisons and even back-up dancing for international acts such as Chingy and Jamelia.

Tui and her dancers maintain a sense of New Zealand culture, which is incorporated into all their dance routines. It’s original and raw, built around New Zealand’s style of hip hop music – such as Dawn Raid and Mai FM – which has also swept the nation.

Like many crews across the country, Urban Beat pride themselves on being of an international level. These crews present the Kiwi culture while still maintaining a humble attitude. It’s refreshing to see the next generation proudly representing New Zealand and continuing this spirit and passion through something they simply love to do.

This article was originally published in TEARAWAY Magazine – The Voice of New Zealand Youth. www.tearaway.co.nz