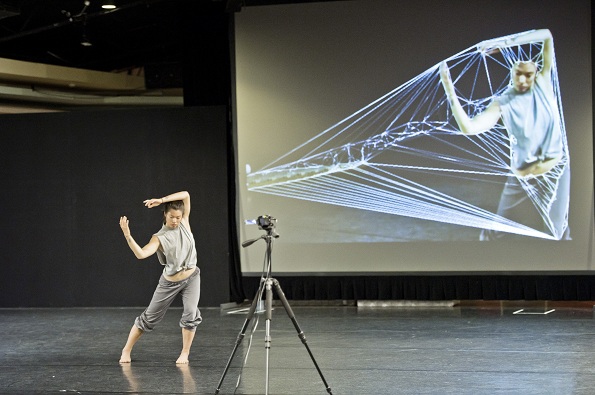 Australian Dance Theatre is getting ready to present the world premiere of their new work, Proximity as part of Adelaide Festival this month. Choreographer and ADT Artistic Director Garry Stewart has worked with Paris-based video engineer Thomas Pachoud (with the support of didascalie.net) to create an astonishing dialogue for dance and real-time video manipulation.

Here Garry Stewart talks with Dance Informa about the creation of this exciting new work.

What research did you undertake to develop the work?

My reading has been centred on aspects of neuroscience as well as philosophy of the self and technology within performance.

Professor Ian Gibbins from the Flinders Medical Centre came into ADT to speak to us about aspects of neurobiology, particularly in relation to neurological body mapping and the function of the nervous system in perception. He subsequently invited us to examine preserved cadavers in his laboratory at Flinders Medical Centre. Some of the dancers and I also attended a lecture by Baroness Susan Greenfield on the neurobiology of creativity.

What is the idea behind Proximity?

To a degree Proximity is the convergence point between conceptual concerns rising out of two of my previous works: Held and Be Your Self. Aesthetically both of these works are wildly different from each other, yet in Proximity I have created a nexus between the intellectual parameters of the two. Like Held, Proximity involves the instantaneous reproduction of the live dancing body, but instead of through the media of digital photography, in Proximity it is achieved via video technology.  The dancers train video cameras on each other and this data is immediately transformed through the ingenious work of video engineer Thomas Pachoud. The imagery is projected immediately onto a series of large scale screens, constituting an instantaneous dialogue for digital imagery and the live dancing body. The interaction between the virtual and the real is the cornerstone of Proximity. 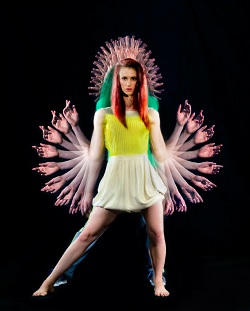 Moreover, Proximity is informed by philosophical considerations of selfhood – its underlying plurality and fluidity – as well as ideas from neuroscience on the process by which the body neurologically interacts with the world around it. Proximity renders visible our invisible connections between each other and the environment we inhabit whilst simultaneously splitting open the self to reflect upon its manifold and heterogenous nature.

In Proximity the subject of selfhood is considered from the position that we are subjects located within our own bodies, but through the doppelganger of video imagery we can see ourselves from the outside and at a distance. Proximity addresses perception and ways of seeing. The act of seeing is conditioned and trained. What our brain chooses to see from the limitless panorama of external stimuli around us constitutes a form of trained blindness. In Proximity the cameras are utilised as a tool to radically shift the frame through which we routinely and habitually engage in the perception of ourselves and each other. The body is re-presented in ways that release it into alternate visual and morphological possibilities.

Tell us about the soundtrack.

The sound score is being composed by Sydney based composer Hugh Benjamin. Hugh used to be a drummer in the 80s and 90s and played for Yothu Yindi, Debra Conway, Kate Cerebrano and many other artists. He has composed music for works I have made for Ballet Du Rhin and Birmingham Royal Ballet. Recently he composed the score for the ADT work Worldhood. The music is quite different to my other works which have been at times quite brutal and bombastic. The music for Proximity is much finer and detailed, soft electronica almost like a series of ambience sonic states rather than hard, beats driven music.

How have you found working with Thomas Pachoud?

I first met Thomas early last year when I was making a version of The Rite of Spring for the Ballet Du Rhin in France. Our collaboration together on this work formed the cornerstone of the video ideas we have pursued and evolved in Proximity. Thomas considers himself a video engineer not a video artist. He enjoys collaborating with artists and responding technically to their artistic ideas.

Thomas’ work is perfectly aligned with the conceptual pursuits of this work. The materials of the body itself are used to stimulate the production of video effects that surround the image of the bodies or in some way manipulate and alter the morphology of the image of dancers. Thomas’ real time video effects become a beautiful visual metaphor for the subject matter which centres on opening up ideas about the nature of self and the invisible neurological connections that exist between ourselves and the world around us.

Do you plan to tour the work?

The plan is to tour the work internationally early in 2013.

Make sure you catch Proximity at Her Majesty’s Theatre, Adelaide from February 25 to March 3. Tickets can be bought at BASS online or by calling 131 246.