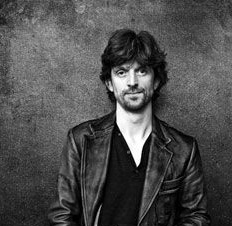 Born in Kingsley, England, Paul Lightfoot trained at the Royal Ballet School before joining Nederlands Dans Theater in 1985. He created his first ballet for NDT 2 in 1989 and went on to create over 40 works for Nederlands Dans Theater, in collaboration with his wife, Sol Leon. Since 2002, the couple – operating under the harmonious name Lightfoot Leon – have been  Resident Choreographers for NDT. Rain Francis caught up with the charismatic Paul Lightfoot, on NDT1’s recent tour.

Every piece has a different catalyst; for this piece it was silent movies. It was Hitchcock who said that silent film is the purest form of cinema. I’m a big film fanatic, and I love the genre of silent movies. It’s basically choreography, because it’s people telling a story without words. I wanted to use a film without anybody in it to create a surreal situation, where you have real people moving with the camera, and they can go to different places that evoke different feelings. I thought it would be beautiful to create a tromp l’oeil, a Victorian parlour trick. Phillip Glass was also a huge inspiration, and his Glassworks is one of his most famous pieces. I was very lucky to come across it at the right time for this project.

Are there themes or ideas that you find yourself returning to in your work?

Yes. Silent Screen is an incredibly important piece for us. It is the journey of a man and a woman, which of course is in relation to Sol and I, the way we work, and the way we are. It wasn’t to tell our story, but it was to tell the story of emotions that every couple can relate to, during the stages of a relationship. Sol and I have been together 25 years; we’ve had many ups and downs and those things inspire you.

Do you always create together with Sol?

Always. Ever since the first piece. For the first few years the works only had my name on them, and  Sol wasn’t really aware how much she was becoming a choreographer. She was helping me. We’d go home and chat, go into the studio and work something out, and slowly this partnership was growing. I like to share. Our partnership is highly irregular in the world of choreography. It’s like a dialogue; we combine our ideas, we respect each other, and move forward together.

Do you ever struggle for inspiration, or are you full of ideas?

It sounds very pretentious when I say I’ve got lots of ideas, but sometimes I think it’s a curse. Generally I’ve got too many. I have to chop them down, get to the essence. It can be very chaotic, but I work very instinctively. I’m a good planner but I immediately break all those plans, and follow my gut. With Sol there too it’s very important to remember that there’s somebody else there. You might be fixated on your idea but you have to be ready to let go of it, because the other person isn’t going to always be on the same wavelength.

Do you get to a point where you are satisfied with a piece of work, or could you go on tinkering with it?

No, there’ve been very few pieces that we’ve tinkered with. There are other choreographers I know and love very much, who get itchy. So they return to older works and make changes. It’s funny, even if it’s a lot better, I feel that they haven’t succeeded. I think when pieces have been made, they’ve been made – there’s a certain kind of destiny to it. Imperfections can be very beautiful, and what make things or people special, so I don’t look to make the perfect piece, and I think that’s part of what makes it magical sometimes. I haven’t touched a step of Silent Screen.

You say you are a film fanatic. What kind of things do you watch?

I love everything. I am a bit of a maverick really, I go to anything. Of course I watch the commercial things. I have a 13 year old daughter, so I’m quite often going to see those ones. I can have as much fun watching those as with a much more artistic film, but generally it’s more enriching to watch the work of great directors.

So, what did you think of Black Swan?

I think it’s a good film. It isn’t realistic, in terms of what a ballet company is – it’s a dark, negative fantasy, and frankly, I can imagine someone in that frame of mind going that far. We do deal with obsession, and we do stare at ourselves all day in a mirror and judge ourselves constantly, and those things can turn into a sickness if you’re not careful. I saw it as a lot less of a ballet film and more as being about the destruction of a human being, and ballet was just a tool to describe her story. The film paints a very dark tale. I love thriller and fear and they’re very important elements to all of us.

What advice can you give to budding choreographers?

I would give them a warning, with all the kindness in my heart – make sure you’ve got something to say. It’s not good to do anything in life if you don’t really believe it. Choreography is sort of an exaggerated version of that, it will show you up very fast.

Also, it’s very important to have your own language. Work a lot with your own body first, don’t just wait for others to do all the hard work for you, because it is hard work. It’s hours in the studio, and you have to be dedicated to doing that yourself.

Don’t be afraid to be influenced. I was highly influenced by many people, in many strange ways. Hans van Manen was a giant inspiration to me, and Jiri Kylian of course. People say, ‘I can see you are influenced by Kylian’ – well, absolutely – where else am I going to learn from? I don’t see that as being somehow negative. It’s very important to learn from people who are lots wiser and more experienced, like we do in all walks of life.