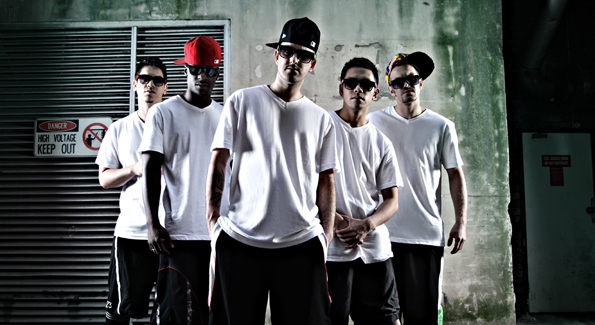 Jesse Rasmussen is a well known dancer and choreographer, who has had an expansive and exciting career in the dance industry. Jesse is fresh off the Tap Dogs tour and New Zealand Stan Walker tour and is gearing up for the biggest dance convention of the year – Flow City Australian Dance Convention. Flow City will be bringing some of the latest and greatest local and international choreographers to our shores, and it is not to be missed.  There is also a hip hop competition and scholarships being given away!  Dance Informa had the chance to chat to Jesse about his creative journey, and find out what Flow City is all about…

Tell us a little about your dance background. What drew you to hip hop and tap specifically?
I grew up and learnt to dance on the Gold Coast, beginning at the age of 10 at the ‘Paradise Performers Academy’.  Back then I was your typical dance eisteddfod kid trying to compete and win as many solos as possible because I had a pretty competitive nature.  I loved it. The school that I trained at was a very technical jazz and musical theatre school where we learnt every style of dance 5 nights a week…. thank you mum!

I booked my first big gig at the age of 17 touring around Australia playing the role of ‘Tip’ in Hot Shoe Shuffle.  I didn’t know it at the time, but this was the beginning of my professional dance career and I have never looked back. From there I went on to perform and tour with four other musical theatre shows.   It wasn’t until I moved to Sydney that I discovered the commercial dance world and fell in love with hip hop.  From there I made it my goal to spend three months of each year training over in LA to learn from the best, and I’ve been doing that for six years now. As for tap, I have always loved it since the very beginning and I think I will be tapping long after I hang up my hip hop shoes!

What was it like being involved in the recent tour of Tap Dogs?
WOW. Tap Dogs – what an incredible show.  I had a great time working on the recent tour.  Tap Dogs is definitely the physically hardest show I have ever performed in.  While we were over in London the reviews said that we were the hardest working show on the West End, and it was true! It’s hard work, but it was worth it. I had a great role in the show and seeing the way the audience responded to us eight times a week drove me to get up the next day and do it all again.  The success Tap Dogs has had over the past 16 years has been incredible.  Dein Perry created an amazing product that managed to stay hip and up to date for two decades and I take my hat off to him.

What is your personal creative statement and what drives you creatively?
‘If you want something bad enough and you put your heart and soul into it – then anything is achievable’.

I think the thing that drives my creativity is that I like to succeed in whatever I put my mind to. I’m not one to give up easily.  I like getting to the end of a project and saying to myself ‘Yes! I did that ‘.  I’ve learnt that once you think you know everything, that’s when you close your mind and you stop learning.

What will be different about Flow City – Australian Dance Convention?
It’s hard to create a product that sets itself aside from all the other dance workshops that come to town, especially in this day and age when I can already name four international workshops that have toured this year.  That’s the industry we live in now. There is always a workshop or dance event happening every other week.  People have caught onto the market, which is a great thing because people no longer have the excuse anymore that there is nothing going on in Australia.

The thing that is different about the Australian Dance Convention is that I strive to bring the very best from around the world to five major Australian cities every year. This year in 2011 the two international choreographers I have on board, I believe, are two of the greatest hip hop dancers that have ever lived apart from Michael Jackson.  They are the most in demand, every country wants these guys, and they are teaching in Australia for the first time. The Squared Division on the other hand have just got back from directing and choreographing KE$HA’s world tour and are currently the highest working choreographers in Australia, booking dancers on a weekly basis.  For working professionals NOT already working for The Squared Division, you would be crazy to miss them.  Tap and commercial jazz have been introduced to Flow City this year for the first time, so we are building a convention that caters for everybody.

What do you want dancers to come away with from the convention?
I want people to walk away from the Australian Dance Convention and say… ‘WOW that was amazing, I am so inspired and I want to be a better dancer.’  That is what it’s all about. All it takes is just that one moment or feeling in class or on stage that can change your life. 9 times out of 10 it’s when you’re watching someone that inspires you to dance. We do most of our learning when we’re watching. And that’s what this convention is all about, it’s about spending the day dancing with the best in the biz, watching, learning and being inspired.

What are the future aims for the convention?
I definitely have big plans for the future of the Flow City.  I want to get it to a worldwide status where people from around the world travel to Australia for our events.  Funnily enough this has happened this year, with dancers from Singapore and New Zealnad booked in for our 2011 event .  Exciting stuff!

Flow City – Australian Dance Convention is not to be missed if you want to be inspired, keep up with the latest in the hip hop scene and further your tap and jazz skills.  For all aspiring professionals, Jesse is one to watch and learn from.  He is definitely carving the way for those who take initiative to the next level, having such a positive influence on the Australian and international dance scenes.

For more information on Flow City and to register, check out the website www.flowcity.com.au