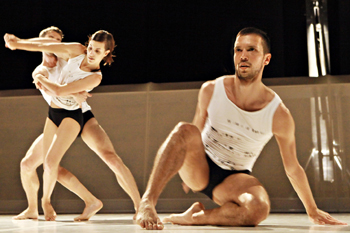 Entity by Wayne McGregor | Random Dance was challenging.  Having read so much on how McGregor is pushing the boundaries choreographically (in collaboration with not only his dancers but significant others such as scientists), his ideals and his use of technology, I expected so much more from this work. Difficult posture and speed of movement made it technically demanding for the dancers, but one could not read much beyond that.

It was refreshing to see costuming, lighting and set design that was relatively simple. It gave the dancers a chance to shine and allowed the choreography itself to complete the stage, which is something we don’t see much of these days.  It takes a talented choreographer not to rely on these elements to make the piece.

The choreography was very reminiscent of the work coming out of many mainstream contemporary companies in Europe, displaying formal lines mixed with broken lines and changes in posture, but still requiring its dancers to be ballet dancers at the core.  The movement itself was very much based on traditional classical ballet and the long lines that the discipline requires.  McGregor himself is known for his lengthy limbs and his ability to be able to move with incredible speed despite their length. This was seen in his attempt to have his dancers move the same way.  There were some inspiring and beautiful moments in the choreography where the dancers really extended to the very nth degree, and then quickly moved on to a distortion of the shapes they had created.

The strength and uniqueness of McGregor’s choreography seemed to come in the group moments. The whole company was on stage performing separate movements that in just moments became very connected.  It was special as we watched sparks of random connection.  I really enjoyed the group work.  I was left wanting to see more group choreography, and perhaps less duo or trios, as there was little or no meaningful or personal connection between the dancers, and when those interactions did occur, they did not seem to lead anywhere.

Despite the dancers’ wealth of training and experience, I found the overall technique lacking.  Some had beautiful technique, gorgeous feet (which is essential for very classical work) and physique.  Other dancers lacked in all three areas.  I felt that the company, although a contemporary company with dancers of all different strengths and personalities, was attempting work that would look much better on the classical companies McGregor is renowned for working with.

McGregor has been appointed as the first contemporary resident choreographer for the Royal Ballet (with no formal classical training himself).  I am sure his work is going to see justice on the Royal Ballet dancers and the audience will see its fullest potential.  Entity was frustrating to watch as I could see what could have been achieved if the dancers were physically ready for the choreography.  It would be mesmerising to see this work on a truly classical company.

I felt that the male dancers’ portrayal of their roles was much too feminine at times, and quite distracting, leaving one wondering if there was a point to having the two separate genders in the company.  Male and female roles don’t need to be defined all the time, but the male dancers didn’t show their strength and individuality as males. The sensuality of the women was shown exquisitely.  It was a shame that the men fell under the same style at times.

Overall the work was commendable, with some really nice partner work, lifts, physical shapes and interactions. I admire the dancers’ attack of such difficult choreography.  At times I was completely mesmerised, but at other times I wondered why interactions were happening or what McGregor was attempting to tell us. I have no doubt that opinions of the work varied across the audience.