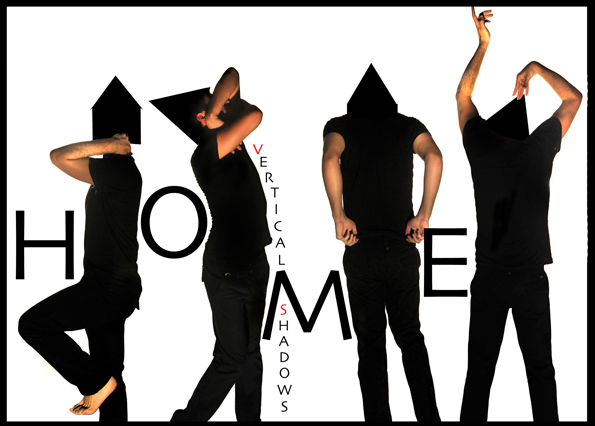 It was a cold and wet Tuesday night in Melbourne, but the foyer of Gasworks Theatre was warm and filled with excited voices and the bodies of dancers and dance lovers.  We were there to witness the opening night of Stephen Agisilaou’s company Vertical Shadows’ latest production.  Entitled Home, the season was highly anticipated, after the company received rave reviews for The Fountain and the award for Best Choreography (Foreign Contaminant) and Best Female Dancer (Foreign Contaminant) in 2009’s Short & Sweet Dance Festival.

Without a cast sheet or synopsis, the audience was seated with no pre-conceived ideas of the piece and were free to interpret the show in a way of their own choosing.  The piece began with the use of only the front third of the stage, with a lone male figure reclining in a Parisian side walk cafe, elegantly smoking a cigarette.  With the sounds of French singer Camille as the soundtrack, a beautiful female tourist entered the scene and commenced a love affair with the French man.  At first she rejected his advances and declined his offers of cigarettes and wine, but by the end of the sequence, she had become intoxicated with the exuberance of holiday love and was smoking and drinking to keep up with her man.  After a brief time, the tourist found herself alone, betrayed and devastated when her lover abandoned her.

The slow paced opening was turned on its head with the arrival of six dancers who danced amongst chairs to the sounds of thumping music. The high energy choreography was in stark contrast to the previously lyrical scene and the beauty of the choreography lay in the angular movements and intricacies which the dancers mastered as though it was as natural as walking.  Agisilaou’s eye for detail is extraordinary, with even individual finger movements not being overlooked and their impact as impressive as a flurry of leg movements.

The piece really hit its stride when the black curtain, which was masking the remainder of the stage, was lifted and the audience was greeted with the colourful scene of a home.  Stripes of white tape traversed the stage floor, which the dancers walked on as though they were tightropes.  The stripes all ended at the entrance to the house which suggested that all roads do indeed lead home.  Within the space, ten dancers performed Agisilaou’s unique brand of fun and oblique lyrical jazz, while the female tourist remained in the background. Obscured by darkness, she chain smoked and drank wine while her friends revelled in the fun of home.

A highlight of the performance was a pole dancing solo which saw the dancer execute some of the most impressive moves I’ve ever seen, and I wasn’t alone, with the audience bursting into appreciative applause on many occasions.  With the audience now sitting on the edge of their seats, we were treated to two incredible male solos, and the implementation of strobe lighting and music to match.  The two male dancers threw themselves around the stage in a flurry of aggression and intensity.  A following female solo was equally impressive and it exhibited a fluid style not seen in the rest of the performance.  The solo was executed under dark lights with smoke that hung in the air as the audience watched mesmerised.

The piece finished with the tourist emerging from her coma of wine and cigarettes. She purged herself of her addictions and of her French lover and returned home.

Home took us on an emotional journey through the highs and lows of life within the home but ultimately showed that we are happiest amongst our friends, suggesting that maybe home isn’t such a bad place to be after all.

Full credit must go to the dancers who carried the choreography with passion, intensity and polish.  The production was fresh, innovative and impressive, with creative use of sets, design and lighting.  I cannot wait to see what the company comes up with next.