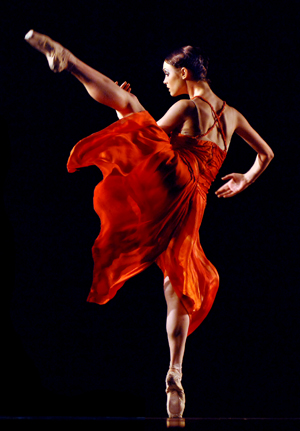 The Houston Ballet celebrates 40 years
In celebration of its 40th season, Houston Ballet will stage a brand new production of the historic classic, La Bayadère. This world premiere by Stanton Welch is an exotic story of the temple dancer, Nikiya, her lover, Solor, and the vengeance that keeps them apart. Set in northern India, La Bayadère will dazzle audiences with lavish scenery and costumes. It will thrill novices and balletomanes alike with its strong classical performances including the famous Shades scene, staged for the entire corps de ballet. La Bayadère will run from Thursday February 25th to Sunday March 7th at Brown Theater, Wortham Theater Center. The 09-10 Season will also see the introduction of five additional works into the repertoire, including masterpieces by George Balanchine, Jiří Kylián, Jerome Robbins and Twyla Tharp.

2009 Next Wave Festival
The Brooklyn Academy of Music Next Wave Festival has returned for its 27th season with an unparalleled line-up of contemporary performance, artist talks, literature, film, and visual art. Dedicated to presenting emerging artists at the forefront of their disciplines alongside modern masters who continue to innovate, this year’s Next Wave is packed with adventurous art for adventurous audiences. Great works being presented include Decreation choreographed by William Forsythe, Itutu by Armitage Gone! Dance, Really Real by Wally Cardona and Company, and Mortal Engine by Australia’s Chunky Move, to name a few. Get your tickets. Visit http://www.bam.org/view.aspx?pid=1096

Laban Workshops and Auditions!
Laban, Europe’s leading conservatoire of contemporary dance training is coming to the US!
Laban, direct from the UK will be running dance workshops and auditions in New York and San Francisco.  The New York workshop and audition will run from November 14th-15th, held at The Ailey Studios. The San Francisco workshop and audition will run from November 21st-22nd, at San Francisco Conservatory of Dance. Places are limited. For more information and to register for the workshops and/or audition contact Clara Bezanilla at usa.audition@laban.ac.uk
http://www.laban.org/dance_programmes/

SAB To Hold Auditions in Tokyo
The School of American Ballet’s first-ever auditions in Japan will be held in Tokyo on October 11th-12th, coinciding with New York City Ballet’s performances at Tokyo’s Bunkamura Orchard Hall (October 8-12). The auditions will be for intermediate and advanced ballet students between the ages of 12 and 18 who are interested in attending SAB’s 2010 Summer Course. The Summer Course is a five-week program in which 200 serious ballet students from around the world live in the School’s on-site residence at Lincoln Center and take ballet, pointe, variations and partnering classes with SAB’s world-renowned faculty. Most advanced students enrolled in the School’s year-round program first attended one or more Summer Course sessions before being invited for full-time training in the Winter Term. The 2010 Summer Course will take place from June 28th to July 30th. The Tokyo auditions will be conducted by New York City Ballet dancers and artistic staff who are also current faculty members at SAB.  Students interested in auditioning must pre-register for the audition by sending an e-mail with their name, birth date and mailing address to sab@kyodotokyo.com.

Broadway Cabaret Festival
The fifth annual Broadway Cabaret Festival will be held at the NYC Town Hall from Oct 16th-18th. The festival celebrates Broadway’s established and up-and-coming talent, with a star studded cast of performers.  Make sure you get to the Town Hall, Broadway’s landmark concert venue, to join in the fun! The Town Hall can be found at 123 West 43rd Street. Tickets start at $50. For tickets and information visit www.the-townhall-nyc.org.

The Pulse On Tour
The Pulse On Tour 2009-10 kicks off in Orlando Florida on November 7th-8th at the World Center Marriott. With esteemed choreographer Gil Duldulao now part of the star studded faculty, including Tyce Diorio, Mia Michaels, Shane Sparks and Wade Robson, this Pulse Tour is set to rock. The Pulse will visit only 11 US cities, plus Toronto Canada, so make sure you reserve your spot. For more information, dates and to register visit www.thepulseontour.com

2010 USA International Ballet Competition
One of the world’s most prestigious dance events, the USA IBC, is a two-week Olympic style competition where tomorrow’s ballet stars compete for gold, silver and bronze medals,  cash awards and scholarships. Designated as the official USA Competition by a Joint Resolution of Congress, the USA IBC is held every four years, in the tradition of sister competitions in Bulgaria (Varna), Russia (Moscow), and Japan (Tokyo). The USA IBC in Jackson, Mississippi remains one of the oldest and most respected dance competitions in the world with up to $75,000 in cash awards, plus company contracts. The ninth USA IBC will return to Jackson from June 12th – June 27th, 2010. The written application deadline is October 30th.  http://www.usaibc.com/

New York City Dance Alliance
The NYCDA tour starts again this October, with the convention’s first stop in Mobile, Alabama on October 24th. The convention will tour to 23 cities before its 16th National Season Finale in New York City in July, followed by a Summer Dance Intensive.
For more information, dates and to register visit www.nycdance.com

International Association for Dance Medicine and Science – 19th Annual Meeting
The 19th Annual Meeting of the International Association for Dance Medicine and Science (IADMS) will be held on October 29th-31st in The Hague, The Netherlands.  The 19th Annual Meeting will be followed by Special Interest Groups Day on Sunday, November 1st. The venue will be the renowned Koninklijke Schouwburg (Royal Theatre). The three-day conference is directed to those involved with the health-care, education, administration and supervision of dancers, including physicians, allied health professionals, alternative healthcare practitioners, psychologists, arts administrators, artistic directors, choreographers, educators, scientists, movement specialists, and dancers. For more information visit http://www.iadms.org