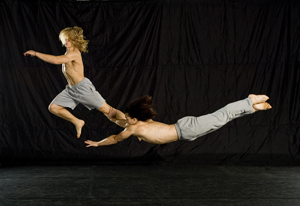 New Breed was presented as part of Spring Dance by the Sydney Opera House. Spring Dance made dance accessible to the general public with all tickets at just $25 and with free dance movies screened in the forecourt. People just flocked to Spring Dance. It is great for the dance industry to be swimming in such success!

Both Sydney Dance Company and Australian Dance Theatre presented New Breed. Dancers from each company choreographed each work in the program. Both companies have explored choreographic ventures like this before with ADT presenting Ignition and Sydney Dance Company presenting The Overture Series. Without these kinds of performances the dancers would not have an outlet to explore their choreographic skills at this level. Such programs give the dancers a great opportunity.

The evening opened with ‘I Dreamt I was a Real Boy’ choreographed by Connor Dowling of Sydney Dance Company. It was a glimpse between dreams in reality and dreams in our sleep. With four defined sections in the work it was easy to follow. The piece opened with a very clear picture as the dancers mimicked people sleeping and having dreams whilst being surrounded with cables of light. It followed with three very different dances. They were different in terms of costuming and movement vocabulary. The last pas de deux was the most memorable. It was powerful as it portrayed a struggle between a couple with intense passion and anger.

‘Bending the Map’ by Emily Amisano, also from Sydney Dance Company, explored human survival and connection. The choreographic patterns and shapes were easy on the eye and the dancers were dressed in dark greys and blues. The inspiration for this work was evident and it has potential, but it could have been a little stronger. It was performed by a trio of very talented women: Janessa Dufty, Annabel Knight and Juliette Barton. Both Annabel and Juliette were both recently nominated for Helpmann Awards for Best Female Dancer.

‘Slack’ originally premiered as a solo in ADT’s 2006 Ignition season and later became a half hour work in the 2008 season. Choreographed by Larissa McGowan, ‘Slack’ had the physically demanding edge that is to be expected from ADT, but it also showcased McGowan’s own distinct choreographic voice. On a small lit platform dancer Daniel Jaber was attached by a long braid extending from his head to the ceiling. His movements seemed to control the movements of those around him. Later another dancer had a rope like braid almost three metres long. She was controlled by how the rope was moved by the dancers around her. The dancers progressed through the choreography always with an element of being controlled. The work was strong in concept and execution.

Former ADT dancer Craig Bary worked with dancers of Sydney Dance Company to create ‘Pictures of a One-Night Stand’. It looked into the lives of people who live in the now and deal with the consequences of their actions later. Using two benches the dancers created scenes depicting a night on the town including everything from getting into a nightclub, drinking at the bar, and traveling on the train. The choreography captured flirtatious glances, jealousy, lust and abuse. The work had moments of lightheartedness with girls dancing around their handbags. I found this hilarious, although the rest of the audience did not seem to react the same way. Then there were scenes depicting a woman being raped. This was cleverly choreographed as the message was clear but not offensive. In this work Craig Bary showed great potential as a choreographer.

New Breed was a wonderful showcase of Australian contemporary dance talent. The dancers were magnificent and the choreography was interesting and engaging.