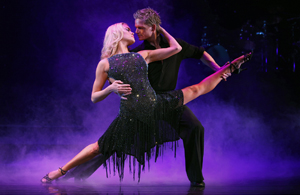 From the suburbs of Perth to the diamond lights of Broadway, Australian choreographer Jason Gilkison has had a dream run. Over the past few weeks his sizzling ballroom spectacular Burn The Floor has been setting fire to New York audiences. Indeed, so successful has it been that the initial twelve week run has been extended as fans and critics continue to drool.

At 43, Gilkison now finds himself at the top of his trade. With a string of credits behind him, (including being Young Australian of the Year way back in 1980, a slot at the Sydney Olympics closing ceremony and his recent high profile work on SYTYCD), he is surely now the undisputed emperor of ballroom.

“The journey has been fantastic,” he begins; and you can tell from his voice that he’s on a major life high. “It’s a bit surreal that we’re actually here. I think we’ve all worked towards it for so long that now that it’s finally happened it’s, yeah, pretty incredible.”
And incredible is a word that reviewers have used liberally to describe Gilkison’s energetic, theatrical take on the ballroom classics. The other word is … sexy. Burn The Floor is ballroom for the bedroom. Or is it?

“It was never our intention just to sex it up,” Gilkison says, suggesting that what he’s doing with the genre is a tad more subtle. “We seem to really polarise the critics on that question because some of them think it’s very outwardly sexy and some think it’s appropriately sexy because of what it actually is; which is, this generation’s interpretation of dances that our grandparents made popular.”

Far from being a knee jerk moderniser, Jason Gilkison venerates the traditions. “Ballroom was always about courtship, about relationships between men and women, so it already has that storyline to it; so when you see a group of good looking young people do it now it does seem very sexy.”

However, one thing he has done is to fundamentally change the context of the dance. Ballroom is, first and foremost, a social form, a partner dance for weddings, parties, anything. Although competition ballroom has always existed, Gilkison has taken it further still, making it the stuff of theatre spectacle.

Reflecting on this transformation, he recalls, “Burn The Floor started off as an arena show because we thought that that was how ballroom needed to seen because no one had ever seen it that way. As we gathered information over the years we realised that, okay, for people to really understand the essence of what ballroom dancing is we needed to reverse it. We needed to get the audience as close as possible. So we scaled it down to smaller theatres so that people could really see the interactions between the dancers.” 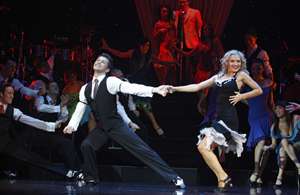 Pasha Kovalev & Anya Garnis with the company of Burn The Floor on Broadway at the Longacre Theatre. Photo Copyright Joan Marcus.

One of Gilkison’s principal artistic challenges was to take an ostensibly intimate medium and make it work for the people in Row Z. To do this, he says, he tries to keep a focus on one couple throughout, following them across the two hours. “It can make it quite intimate and you can get an insight into not just that couple but how those two individuals are feeling within that couple.”

However, intimacy is not an issue with TV. Since joining the team at SYTYCD Gilkison has learnt to work with both the restrictions and the possibilities of a tight camera space. “I like being able to see right into the situation between two people; and that’s been a new thing for me. It’s been exciting for me to get to know how to film a couple like that.”

Indeed, he likens it to learning another language. “When you’re doing close up TV stuff you almost have to have a conversation when you’re dancing because that camera gets so close to you. What would look normal in a theatre looks completely different on camera, which is why I now understand what people really mean when they say ‘that girl’s great on television’.”

For someone used to the director’s role, working under the formulaic umbrella of commercially driven TV could also present issues. Gilkison laughs it off. “It’s so hard to fit in a beautiful storyline between two people in just ninety seconds. I think that’s my biggest challenge always,” he says, with only the barest hint of irony.

As for creative control? “I’m somebody who gets to go a little bit left with it,” he reveals.

Freedom to stretch the bounds and experiment will now surely be extended to Jason Gilkison. He has the runs on the board. He has proven himself in the world’s toughest market. He is that man in the corner … and boy I gotta warn ya, it’ll turn into a ballroom blitz.