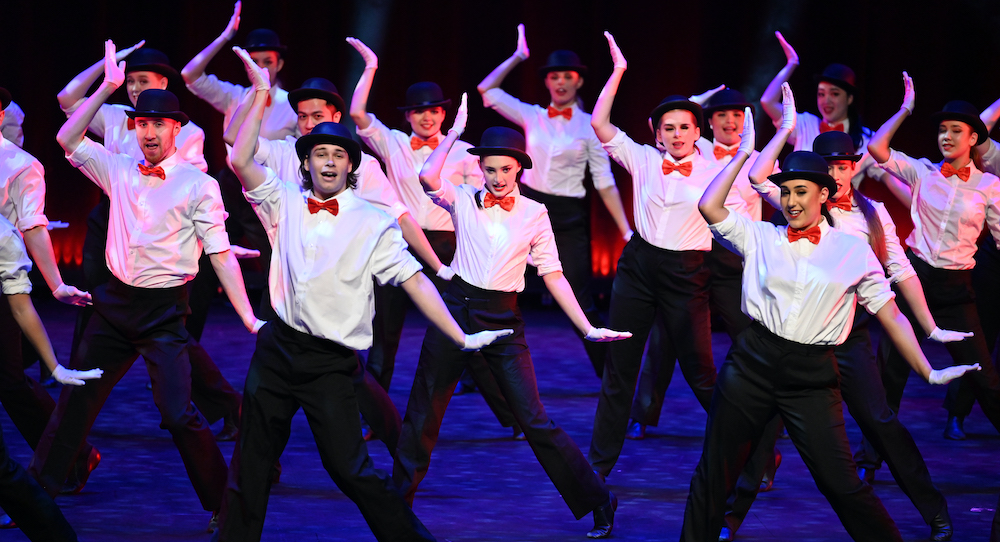 Spotlight – Musical Theatre Cabaret Gala was the first of three nightly shows at the Light the Way Dance Convention, held at the Sydney Coliseum, West HQ this June. After a postponed inaugural year, Light the Way Dance Convention got off to a banging start. A wonderful celebration of dance and performing arts, Spotlight honoured the past, present, and future of musical theatre and performing arts in Australia with its mixed bag of show-stopping song and dance numbers.

Light the Way Dance Convention is the joint venture of dance industry leading lady Kelley Abbey and renowned producer Louise Telford. This powerhouse duo combined forces to create a unique and exciting opportunity for dance students through to early career professionals, to experience masterclasses, mock auditions and an opportunity to perform alongside the finest our industry has to offer.

Day one included a mock cattle call style audition for Fame the Musical, which featured as the opening number for Spotlight. It was a high energy piece, with musical theatre star Angelique Cassimatis singing the lead. The excitement and enthusiasm from the stage was tangible and set the atmosphere for a wonderful evening of entertainment. In a later interview, Abbey talked about the loss of the cattle call style audition in Australia, and how valuable this kind of experience is for our students, hence this opening day workshop. It was evident on the faces and in the energy of each performer how much they had valued and gained from this opportunity.

After the opening number, we were honoured by an interview with industry icon David Atkins OAM, and convention host Luke Jacobz. Atkins discussed the highs and lows of his career, and lessons for young dancers, sharing his wisdom and depth of experience. It was wonderful to be in the same room as Atkins and glean some of the gold he had to share, being one of our most successful entertainment exports. Later in the night, we also had the opportunity to experience Abbey’s interview with Jacobz, in a similar vein to Atkins, sharing her own journey and insights. Had the night just been these two interviews, it would have been worth it. Students from Village Nation Performing Arts followed Atkins’ interview with a medley tribute to some of his career highlights, in the vein of his self-produced show, Dancin’ Man.

Spread through the program were performances by industry professionals The Tap Pack, who brought fun and tight rhythms mixed with humour, the euphonious voice of Mindy Kwanten, and treated to some classic musical numbers and interview with theatre icons Rachel Beck and Michael Cormick, who also entertained with a short question and answer session.

There were three items chosen to perform on the night, out of 100 applications submitted to the Light the Way team. Solo singers who blew us away with their powerful voices and captivating performances – Kasey Burgess from Brent Street singing “Gimme! Gimme! Gimme!” From Mamma Mia!, Lauren Bombaci from Village Nation Performing Arts singing “Someone Like Me” from Jekyll and Hyde and Sophie Zidar from Launch Performing Arts singing “The Winner Takes it All” from Mamma Mia! Zidar particularly held her own from the moment the lights went up, pulling focus brilliantly and holding her audience from start to finish.

Other performing arts schools spanning Brisbane to The Shire performed with large troupes, interspersed throughout the program — including Conroy Dance Centre, Launch Performing Arts Centre, Ettingshausens and Brent Street. They brought unique, energetic, mature performances that kept the atmosphere in the room electric.

Spotlight was a wonderful night to cap-off day one and opening performances for Light the Way Convention, setting the stage for an exciting weekend of dance. It was an inspiring evening to give attendees a springboard into a mindset of absorbing and pushing boundaries as they learn from the best the industry has to offer over the weekend. We had the absolute privilege to witness some of the very best of our industry, and it will not be a night to forget. No doubt, Saturday’s Lux Performing Arts Showcase Gala and Sunday’s Spectrum Performing Arts Showcase Gala will follow suit. For students and young professionals wishing to extend their skills, passion and depth of understanding of their artform, Light the Way Dance Convention 2023 should not be missed!