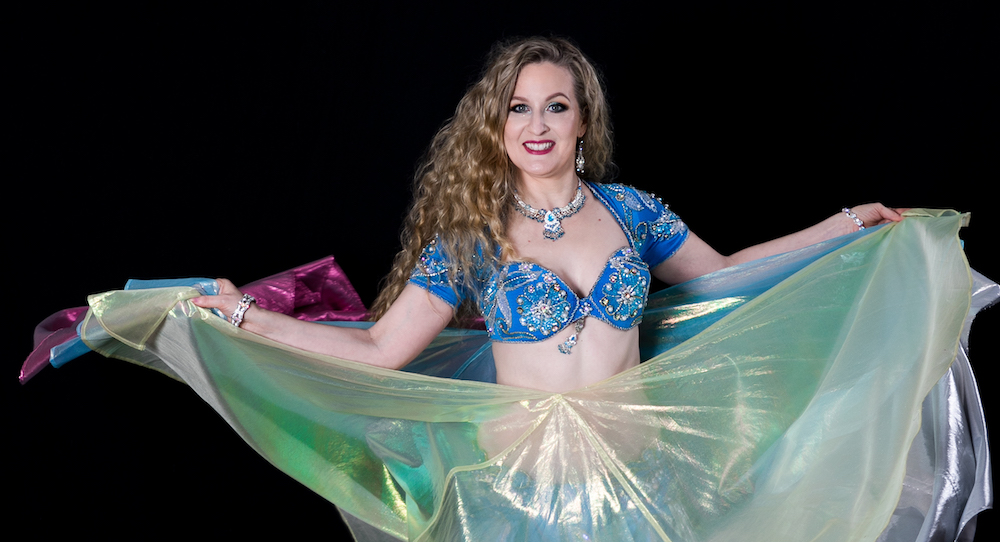 Dance Informa had the fascinating chance to interview Dr Laura (Amara) Osweiler, a multi-faceted dance and music artist, academic and one who also works within the framework of living with disability. She talks about her journey, experiences in going down a path to experimental Middle Eastern dance, and how this ties in with her work as a scholar, teacher, choreographer…her journey as it has been shaped by her life experiences.

Can you please tell us a bit about your training as a young dancer?

“I was always dancing and improvising around the house. My first official class was when I was five at Ballet Hysell in New Orleans, Louisiana. I then picked it up again in junior high. During this time, I performed in a few ballets with Harvey Hysell, who had restarted his dance company. His previous one had become the New Orleans City Ballet. I really enjoyed taking ballet classes. I loved the fun, technique and physicality.

Growing up, I was focused more on the violin, and I would say my training was more in music in terms of discipline – learning how to practise, being able to take feedback, understanding compositional structures and using my body to create art.

I started taking Middle Eastern dance classes in college, performing in community festivals and events. And it kind of took over. Almost 30 years later, I’ve performed in all sorts of events, choreographed for myself and others, ran a semi-professional dance company, produced international known shows and festivals, taught university courses and at dance studios, and developed a studio teacher training program.”

How were you first introduced to Middle Eastern dance, and what drew you toward making it your focus?

There are many aspects of the dance that I fell in love with: the diversity of dance forms and their cultures and histories; improvisation as a way to directly engage with musicians and audiences; the variety of music and playing zils (finger cymbals) while dancing; the ebb and flow show structure; costumes like the glitzy bedlah and the numerous regional outfits; props; and the role of dance as art, celebration and entertainment.

Engaging with individual diaspora and immigrant communities with their own customs and practices…for me, dance is a way to interact with others and embody on a deep level how we move and view the world. It is also means to engage and understand the power dynamics between genders, cultures, classes.”

Can you talk about your choice to take an academic path, and what your research was centred on?

“Academia had been part of growing up. My dad was a professor and my mom went to graduate school. I’d say that my dad, being a pioneer in computer science, influenced my desire to explore, push boundaries and build new spaces. And my mom’s love of science and nature influenced my interest in how the body works.

Early on, I wanted to be a professional violinist which meant going to college. I initially went to Ithaca College for Music Education, but transferred to the Florida State University, obtaining a degree in Music History and Literature, and a certificate in Ethnomusicology, with a focus on Indian and Chinese music. I played the Chinese er-hu and wrote my senior thesis on an amazing sitar player, Nalini Vinayak.

At The University of California, Los Angeles, I worked officially toward an MA in Dance Ethnology, and unofficially an MFA in Dance Performance. Due to a variety of circumstances, I didn’t finish either. I transferred to The University of California, Riverside, where I did my PhD in Dance History and Theory. There, my main focus was on feminism and post-feminism studies, postcolonial studies, oral history, dance history and anthropology of performance. I applied that information into researching the history of Middle Eastern dance in the United States.

My dissertation centred on a core group of dancers/choreographers who performed in a production I produced, An Evening of Experimental Middle Eastern Dance (EEMED). I conducted extensive oral histories on their approaches to what I defined as Traditional and Experimental Middle Eastern dance. I placed their practitioners’ voice at the centre of the text and contextualised their work within the American Middle Eastern dance community and dance academia. Much of the dissertation is about rhetoric: what words they choose to identify themselves and their dance, and genre development: how a dance becomes identified as a distinct form.”

“My definition of Middle Eastern dance is pretty fluid and encompasses many forms of dance. For me, traditional dances are contemporary practises which focus on and promote a continuation of history and identity. Over time, traditions can change — sometimes a little, sometimes a lot.

Experimental dance focuses on changing. I don’t use the word evolving to describe my work, as that puts forth the idea that it is better than what came before. For me, experimental Middle Eastern dance connects into traditional dance forms. I see some artists work to modify, bend or break characteristics that identify a dance as that dance. Others bring in elements from different sources. But they are always referencing a traditional dance form.

What inspired you to experiment?

“It was there from the beginning. My improvisational nature. My curiosity about how things work. My tendency to meander and look to various sources to explore questions in my life and understand, who I am as a person and a dancer.”

With regards to what is discussed in your dissertation regarding experimental Middle Eastern dance practitioners breaking from traditional forms, whilst still identifying as Middle Eastern dance, do you see this as a parallel to what the original modern dancers did?

“Many of the dancers that I interviewed for the dissertation identified as traditional dancers. And experimental dance, although entwined, was seen as a different space. Some dancers no longer practiced traditional forms or used the term Middle Eastern dance or belly dance. Others came in from a different dance form and integrated elements of Middle Eastern dance. It comes back to the degree and intensity of identifying with a term, and what power it brings.

Depending on the artist and often the specific work, a dance may focus on how to break from or push out from a tradition or a specific dance form, and all the many characteristic and body memories one has had to contend with. But it was in no way about rejecting or destroying tradition. It was about finding a home, a space to create and express who they are.”

It seems, there is an oscillation between wanting to be different but wanting to still be identified with Middle Eastern dance.

“These two ideas are not exclusive or in opposition. For me, Middle Eastern dance always/already contains differences: in the variety of forms, within a form of over time, between dancers in a form, in a form when it moves location and purpose, and the development of new forms. What we did in EEMED was make it a focus. The substructures are similar between presenting how a dance form is continued and how a dance form changes. It comes down to purpose and power of identity.

Much of my experimental Middle Eastern dance work explored the boundaries. Now, as I’m creating in a new country, working more in the contemporary dance sector as well as in the Middle Eastern dance community and managing my health, my work has greatly shifted. Early on, I had to build a space. Now, I live in it and have a history here. And because of my health, I’m remodelling.”

You also live and work with the condition, cataplexy. Can you explain what cataplexy is and how it affects your day-to-day choices and ability to dance?

“Cataplexy is a symptom of Type 1 Narcolepsy, which is a neurological sleep disorder. Cataplexy is when the body goes into REM sleep and the brain stays awake; when muscles release or become paralysed while conscious. The causes of this disease are not well understood, and there is currently no cure, nor one on the horizon. Medication is used to manage symptoms.

Cataplexy affects each person differently. I experience cataplexy in the form of episodes that range from subtle slagging of my face muscles to full body release. I’d be considered an artist with invisible disabilities. Meaning people won’t know from looking at me or watching a show that I have disabilities. Some with cataplexy can’t control episodes. Others, like myself, have an amount of control. Meaning, I can push through one if I must. But there are consequences like it will be worse when I’m in a safe space and my recovery time will be longer. An episode can be triggered by a number of things, and I have learned to recognise and manage them. Some of my tactics include living in Crip Time (listening to my body’s needs, pacing my energy and adding additional prep and recovery time); keeping my body strong and flexible; and using dance and choreography to understand it and create art from it.

I previously mentioned I’m remodelling my dance space. After being very sick a few years ago and years of being missed and incorrectly diagnosed, I finally got answers. And narcolepsy is just one illness I manage. I had to question…how can I work and be productive? I had to pull things apart. I kept some tools that worked for me now and left others that were no longer helpful behind. I am accepting and appreciative of this journey. It is a whole new world to explore and share.

While my experience is my own, my goal as a teacher and choreographer is to share what I have learned about narcolepsy and how dance has supported my health. My current practice interweaves dance, movement, film, music, audio description, and health, and employs communication technologies to support access and engage with audiences in different locations. Currently, I am involved in several projects which are focussed on sharing and developing an online practice. I have a broad work called Dancing into the Unknown. Within it are projects in which I use health and performance practice to inform each other. Another is a research residency at Critical Path in which I am choreographically exploring my phases of cataplexy. And the other is an online production of Shifting Lines.”