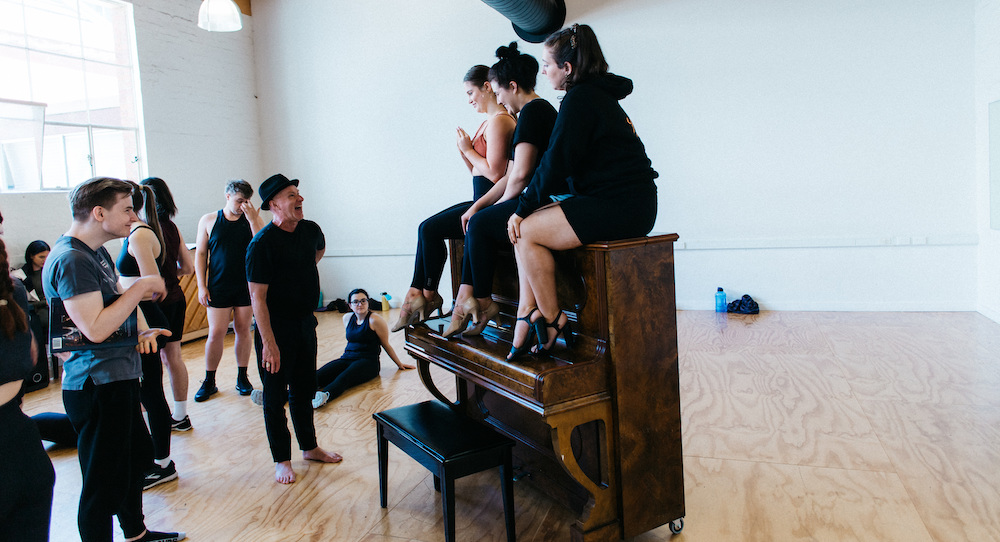 The email said he had just turned 50 and that he was still, quote, fabulous. When I mention this to Andrew Hallsworth, he laughs. As someone with a 33-year career in musical theatre behind him, scooping three Helpmanns and a couple of Green Room Awards along the way, he has the perspective that only experience (both life and industry), can bestow. As such, the laugh is knowing.

It’s what you might expect from someone who is passionate not just about his art but also his role as a teacher. Of the former, he is quick to acknowledge that his success was not due to talent alone and that he was “lucky enough to meet the right people” at the right time. Regarding the latter, and the three year Diploma of Musical Theatre he fronts at Patrick School of the Arts in Melbourne, he says simply, “It’s the only thing I can give back.”

If forced to reduce it to practicality, what Hallsworth wants to make clear is that, if you have the right work ethic, you really can have a career in music theatre in this country. “I know that the parents of these kids who love singing and dancing are saying that this is not going to last, and my parents said the same to me. But,” he adds, noting that the Patrick campus is alive with young hopefuls, “still they keep coming.”

However, he is also quick to make clear that the school is not a dream factory. By itself, a course will not get you a gig. “You can be the best singer or dancer or actor, but that doesn’t mean you’re going to get the job.”

Nonetheless, the aim of the now three year Musical Theatre qualification is to prime students for a future career. “The mantra of my course is that when you’ve finished training, you’re ready,” he declares. “The other thing I tell students is that it doesn’t matter what course they go to. Most will give them the skills they need. What matters is what you bring to the course and what you take from it.”

For Hallsworth, the keys are work ethic and respect. “Skill is not the only thing you need,” he elaborates. “I don’t teach acting or singing, we get specialist teachers in for that, but what they get from me is a very honest and accurate idea of what the work ethic needs to be for you to have a career… Because it’s not all fun and games. We have to strive now for standards we’ve never reached before, and so if you don’t understand that, then you won’t push yourself.”

Underpinning all this is the existence of a vibrant musical theatre scene in 2020s Australia. The Patrick School could not reasonably offer a three year diploma if the desired outcomes were not realistically attainable. As Hallsworth explains it, “What people don’t understand in this country is that you can actually have a career in musical theatre. You can make great money and have the dream of buying a property and all that stuff. But if students don’t understand that, then they don’t have the right drive that lets them get that wonderful career.”

At the nuts and bolts level, what this means is that the old two year qualification has morphed into a three year diploma, the newly added third being dedicated entirely to performance, culminating in a full scale production.

“In a two year program, you don’t even really know who you are as a young adult afterwards,” Hallsworth contends, “so you need that extra year to grow into your own person. ‘Who am I? What can I give to the industry?’”

Moreover, in a hotly competitive marketplace, the right training is more critical than ever. “You can’t even get an agent unless you’ve had some kind of training. Not anymore. You have to be a triple threat.”

Having been a dancer, dance captain, choreographer and director, Hallsworth has a widescreen view of the industry. His show credits include 42nd Street (in which he debuted at just 17), Priscilla, Kiss of the Spider Woman and Hamlet. It is a diverse CV, one that prompts him to proclaim that “what’s unique about my course is that I’m at the helm.”

If this sounds like a big call, he backs it up. “My fingers are in so many musical theatre pies as a practising creative, and to be taught by someone who knows what’s actually going on in the industry is a real gift.”

Yet, as you might expect, the gift gives back. “It’s a two way street. I still work in the industry, but the students who come in, who are 19, 20, they keep me fresh and on the ‘woke’ side of things. They help me keep moving forward with my career.”

Whatever claims Hallsworth may make about himself, the school or the course he runs, his gratitude and joy are never far from the surface. “It’s a gift for me, truly it is,” he reveals. “When Todd [Patrick, school founder] first asked me to start up a musical theatre course, I was like, ‘I don’t have the time for this; I’m too busy doing shows,’ and he was like, ‘No, you’re going to be so good at this. Let’s do it.’ So we did, and I love it. And you know, it doesn’t matter how many Helpmann Awards I’ve got. None of that means anything really. They’re just things. This is what matters. Mentoring, teaching, giving back.”

With auditions for the 2023 intake coming up in July, Hallsworth finds himself looking forward to the next wave of youthful inspiration. Indeed, that email could well have said that he was 50, fabulous and thankful.

Hey, Is there a musical in that?

Patrick School of the Arts’s Musical Theatre auditions for the 2023 intake will be held on the 8th, 9th and 10th of July. For more information and to apply, visit www.psarts.com.au/auditions.