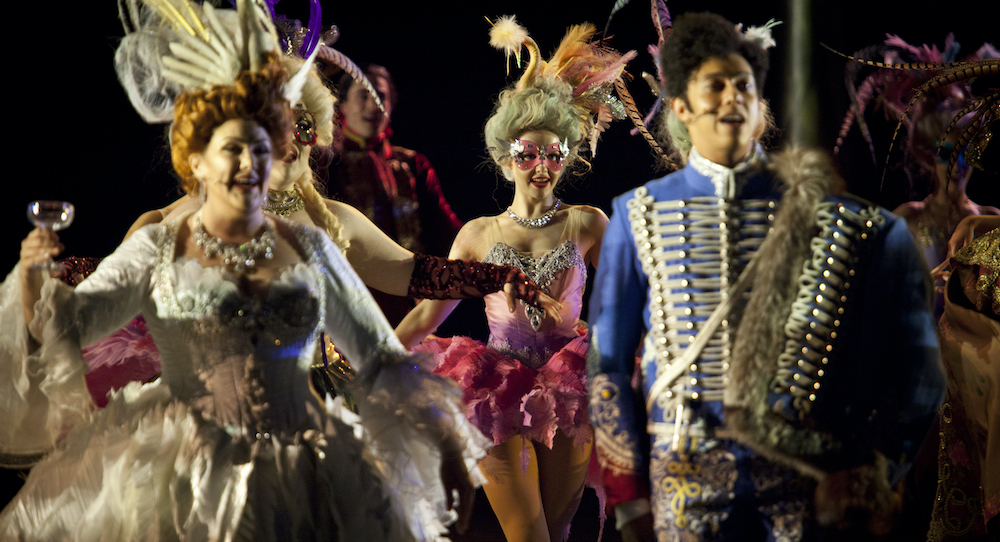 “Ours is a very personal story,” she confides, “but it makes you wonder how many of these stories are actually out there.”

Belinda Strodder’s family narrative is in some ways typical – three generations sharing a similar passion – but in other ways remarkable. In fact, part of the reason we are sharing it with you now is that, incredibly, it involves us.

When the Sydney Harbour season of Phantom of the Opera opened in late March, and Stodder took the photographs that accompany this piece, a multi-decade, inter-generational journey reached a kind of conclusion; and the link between an Adelaide jazz ballet school, a global musical hit, an aspiring dancer, an award-winning photographer and Dance Informa was realised in a fashion worthy of a French novel.

“I’m not religious, but I do believe in fate, that things connect in a way that we’re not aware of until something like this happens,” Strodder reflects.

Gaston Leroux could not have known that his 1910 book would spawn a record-breaking stage phenomenon or, a century later, that it would impact the lives of three Australian women in such an intimate way.

Long before Andrew Lloyd Webber concocted his mega-hit Phantom, Strodder’s mother ran the Southern Jazz Ballet School in Adelaide. The young Belinda grew up in dance. Until her late teens, it seemed she would follow in her parent’s footsteps, but then she decided to pursue her passion for music, and a few years later found herself in the orchestra pit playing bassoon as part of the original Australian run of Phantom in the early 1990s.

Back home in Adelaide, Julie Grey must have loved that her daughter was a part of a show that (in Strodder’s words) she was “obsessed” with. “I mean, she was just mad about it, to be honest,” Strodder recalls. “She had all the paraphernalia and everything.”

Meanwhile, just as she once had, Strodder’s daughter Giselle was also growing up in the theatre, a side effect of having parents who worked in various aspects of live production. It sparked a desire that would eventually land her on a floating stage in Sydney Harbour, and to work with the same director and orchestra leader (Simon Phillips and Guy Simpson) that her mother had three decades earlier.

The aptly named Giselle “grew up in the wings watching ballet and being looked after by ballerinas in their dressing rooms,” Strodder explains. “So, she was just obsessed with it at a very young age. When she was only two-and-a-half, she looked up at me and went, ‘Mum, I’m very serious about my ballet.’”

If it once seemed that a straightforward arc of generational progress would neatly unfold, things got messy when Strodder decided to switch careers once more. Of what drove her to change course, she says simply, “I adore Phantom of the Opera, but being in the pit, I’ve only ever saw it once during all that time.”

Thus, after years in the orchestra, she hatched a desire to pursue another of her creative passions. “It happened pretty naturally, mainly because I’d always been interested in photography; but it really started when my daughter started ballet. The first dance school she went to were interested in me capturing some images of a performance, and I just discovered I had a knack for it.”

Strodder continues, “Then, as I developed my photography career, it became obvious to me that I was getting a bit sick of not being able to see the stage. Being in the pit for 14 performances of Nutcracker and never seeing it was a little frustrating.”

(And here’s where we come in. In an effort to grow her portfolio, Stodder reached out to Dance Informa, and we sent her to photograph a Ministry Of Dance (MOD) showcase. From there, she forged a working relationship with MOD’s Founder Jason Coleman and this, in turn, led to her setting up a studio at Ministry’s North Melbourne campus.)

However, Strodder and her young daughter’s lives were about to be upended. Julie Grey got sick. Very sick. Belinda and Giselle only had three weeks with her before she died. “Giselle just watched Phantom of the Opera continuously. It was a comfort to her, knowing that it was my mum’s favourite musical.”

It was a traumatic moment, but, as it does, time passed. Giselle grew into a woman, Strodder’s career blossomed, COVID came and (almost) went, and Phantom returned Down Under. As Strodder says of her daughter’s determination to be a part of the 2022 production, “I’ve never seen her want something so badly.”

Then, on the anniversary of Julie Grey’s passing in early February, Giselle Graham received an email telling her that she had been cast in the ensemble. “It could have been any day,” Strodder notes, clearly moved, “but it was that one.”

As a first professional contract, it is hard to imagine anything more fitting. “On the first day of rehearsal, she told me that the hairs on the back of her neck stood up, and that she felt my mum was there with her,” Strodder reveals. “I think it was a really special moment for her, just realising what she was going to be a part of.”

For a dance school baby from suburban Adelaide, the opportunity to photograph her late mother’s favourite musical in a spectacular harbourside setting was always going to be a big lure. That her daughter will be on the stage – a stage that, at last, she can see – will be, as she says, “like the closing of a circle.”

For our part, we are humbled to have played a small role in this story. For us, the photographs that we are publishing here are also a kind of ‘circle closing’ moment. Sometimes – perhaps more often than we realise – life contains stories we could scarcely invent. Who knows how many we all are a part of?