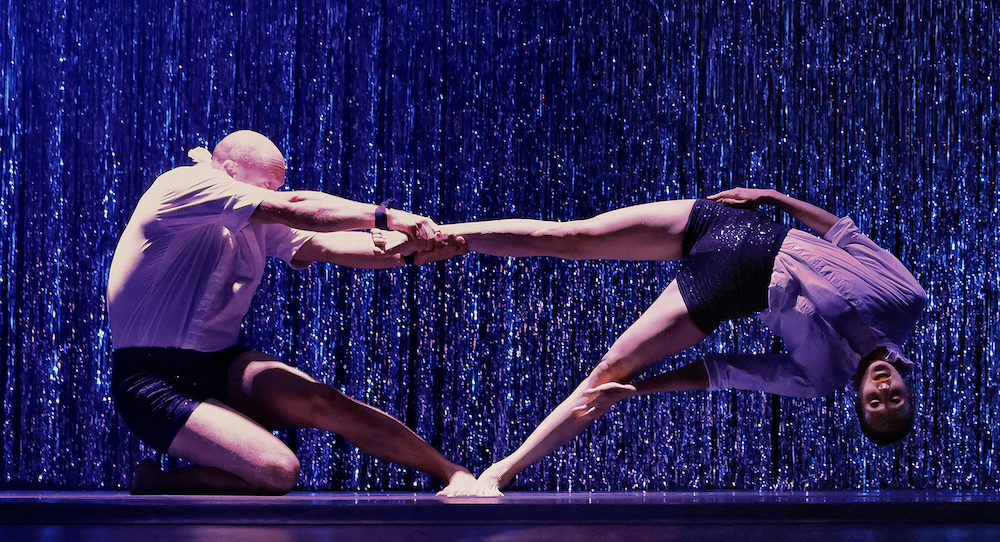 Australian contemporary circus company Circa continues to blur the lines between its foundational circus arts, theatre, contemporary dance and other movement arts. This rendition of Peepshow (premiered in 2018) is a sexy and beguiling show that offers us a secret look into the hall of mirrors that dreams are made of.

Circa’s reputation of genre defying works is due to the creative vision of its Founder and Creative Director Yaron Lifschitz, who has strongly emphasised the “art” in circus arts. In each of the company’s works such as Sacre, Leviathan and certainly Peepshow, there is always a visually arresting, dramatically paced and emotionally charged performance.

The stage is a simple affair with a neon peepshow sign over a tinsel screen that allows performers to reach through and transition between the world of dreams on stage and the backstage of conscious reality. The porous tinsel curtains capture the porous nature of our conscious and unconscious dreams. The set design and costumes are reminiscent of the 1930s cabaret with its mix of the illicit and the intimate.

The performance is a loosely structured set of vignettes with circus acts, predominantly acrobatics that are done with a dancer’s elegance and dramatic flair rather than the showy pizzaz of a traditional circus performance. Nevertheless, the palpable physical risk and danger that circus arts bring to the stage added to the show’s audience engagement.

The emotional heart of the performance was in the curation of songs that make up the score. These included “I’ll Be Your Mirror” by Shakespears Sister, Louis Prima’s “Just a Gigolo”, “Screamin”, Jay Hawkins’ “You Made Me Love (I Didn’t Want To Do It)”, Caetano Veloso’s “You Don’t Know Me” and the centrepiece “Sweet Dreams (Are Made Of This)” performed by Soul Rebels. This eclectic range of music perfectly captured the way dreams unfold. Some are small, inconsequential, while others dramatic and painful. The performance was well paced, and the mood varied with light-hearted vignettes intespaced with sexy musical numbers woven within the ensemble pieces.

The most impressive aspect of the whole performance was the unerring musicality of the performers who made much of their gravity-defying stunts graceful and moving. Perhaps these skills have been honed through the company’s collaboration with live orchestras such as the Melbourne Symphony Orchestra and the Australian Brandenburg Orchestra. It was this musicality and stage presence that blurred the lines of dance and is something any dancer could learn from – how to move through difficult positions with lightness and grace.

For dance aficionados, the highlight of the show was the aerial silk work that was literally dancing in the air. The performers fluidly moved with balletic grace in the air, to pole the raunchy pole dancer, always with a real sense of danger in their defiance of gravity. While a number of dance companies have explored the use of aerial dimensions with trapeze and aerial silk work, it is probably an area that could be explored more with companies such as Circa leading the way.

At first glance, Peepshow seemed like a seedy promise of going to the dark side of the human psyche, but it was really a clandestine entry into a seductive cabaret of the mind. Circa presented a vision of contemporary circus and physical theatre that was fun, graceful and emotionally moving.