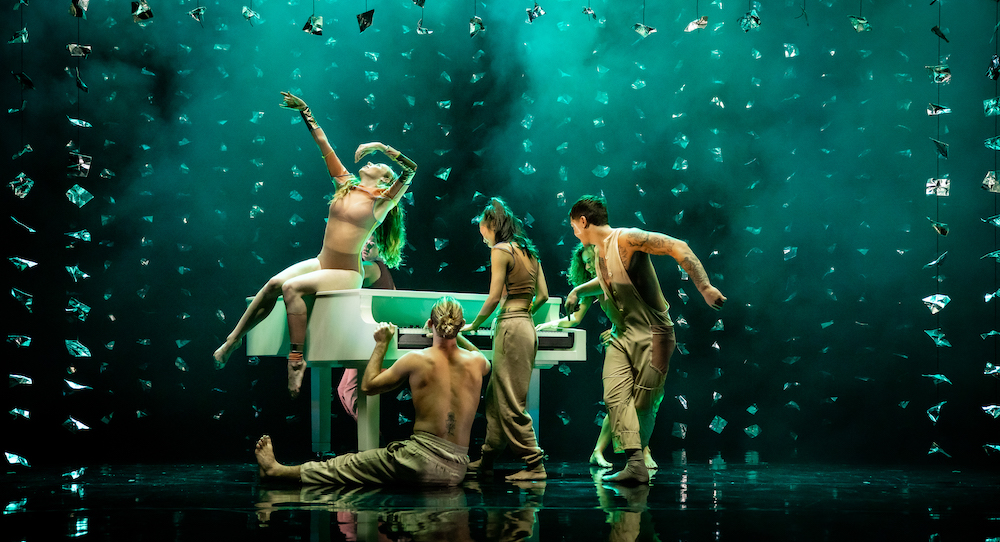 Leap exploded onto the stage this week with its world premiere at the Riverside Theatres, Parramatta. Amy Campbell’s concept for a new, visionary work has finally been realised, and it is so much fun, with high energy and good vibes to be had. Be prepared to experience something akin to a trippy dream, a kaleidoscope of exploration. Funding for Leap was assisted by the Restart Investment to Sustain and Expand fund (RISE) an Australian Government initiative.

Leap was conceptualised by director producer Neil Gooding; brought to life in collaboration between the talented performer, choreographer and director Amy Campbell; and musical supervisor/arranger Victoria Falconer, highly accomplished musical director, performer and composer. Leap is a highly explosive dance work, with a reimagined classical music score, that works its way through familiar pieces which generations have grown up with, renewing the familiar and giving it an original edge.

There were pieces that gained a myriad of beats, vocalisations and rhythmical play that weaved in and out whilst the dancers played and moved with the score. The music was played live, with the musicians featuring in and out of different pieces. The interactions were sometimes random and a part of the dancers play, and at other times, they were a featured accompaniment, the lines were often blurred, and that was half the fun.

The work opened with a montage of images by the cast, amidst hundreds of silver crumpled squares hanging on rows upon rows, that throughout the show moved up and down to create various shapes, such as a proscenium arch impression of a smaller stage. The only other set pieces were a piano that was wheeled in for one scene, and the musicians themselves. A few props were featured such as juggling balls. Mostly, the dancers created the various changes in scene with their use of the hanging silver and the stage in an intentional use of space.

Callum Mooney commenced a solo post opening, moving in a contemporary/street dance style, bringing the performance aspects of a more experimental style. There was a solo musician on the stage which he had some interaction with. Mooney then seemed to be a thread throughout the show, with hints of Cirque du Soleil style storytelling, the random character that seem connected and has significance in various scenes, but in Leap, you cannot quite grasp what they are about or why they are the one the story centres around. This was one of the weaker aspects of the work; the thread was too random, there was not a clear connection of Mooney to the idea of the work, although he was clearly singled out to feature. This meant that although the aim was not to create a concert, the structure of varied piece after piece, with a lack of development into something beyond this, meant the work did carry like a concert that generally flowed well from one to the other, but lacked any clear purpose beyond this.

Following, each section featured various members of the cast, and a new musical number. Some were the commonly known sections of score re-worked, others were pieces that were the classical equivalent of a mash-up. The cast consisted of dancers from a variety of backgrounds, each bringing something special, a unique style and edge that exhibited a playful exploration of styles and ideas beyond their comfort zone. Along with Mooney, Ashley Goh, Cassandra Merwood, Felicia Stavropoulos, Maikolo Fekitoa, Natalie Foti, Neven Connolly, Shontaya Smedley, Jervis Livelo and Ryan Ophel all shine in their own way, with a beautiful cohesion on the stage that was tangibly joyful.

Costuming consisted of a range of styles in what was likely tan, watermelon, silver, possibly blue, but it was hard to tell as the lights were almost entirely dark colours – reds, purples, blues – and this took away from being able to fully appreciate detail in the design.

One of Campbell’s aims in creating Leap was to explore the lumen between style and idea, to bring some new, not concert nor musical, but certainly including the elements, playing with lights, set, music and costumes, not following the rules. A beautiful collision that felt somewhat akin to a dream like state, where anything is possible. Leap is a wonderful opportunity for dancers to see their dreams come true, a dancers showcase to see our industry shine, whilst bringing something joyful to the stage that will have audiences leaving feeling uplifted and inspired.

Leap is now touring the east coast of Australia after a wonderful opening season at Riverside Theatres, Parramatta. See when Leap is coming to a town near you: www.leaptheshow.com/tickets.