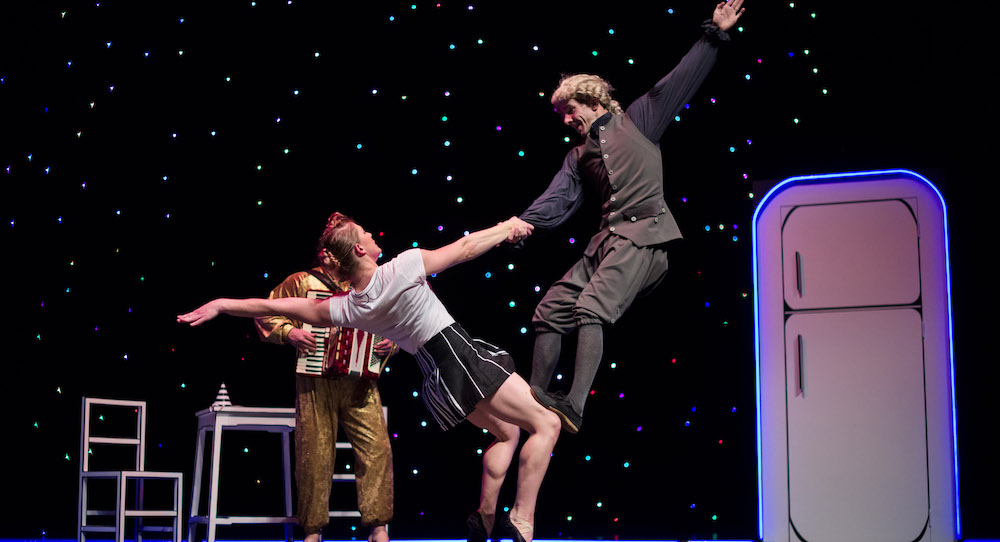 Brisbane-based Circa Contemporary Circus brought one of its acclaimed children’s shows to the Theatre Royal Sydney for a short season this Easter school holidays. Circa is a performance company that bases its works in storytelling around the circus arts, physical theatre and a multitude of creative disciplines. Wolfgang’s Magical Musical Circus (WMMC) premiered in Brisbane in 2018, touring Australia, New Zealand and the UK, and this tour will travel the east coast of Australia, to cities and regional centres. It is aimed at children three years and older.

The story revolved around Wolfgang and his friend embarking on a journey at her birthday party, with a structure that consisted of various sections, each with a different joke or apparatus as the focus. This made it easy for the younger members of the audience to follow, as it was rather simple, with complex tricks and games the main attraction. It was very sweet, very silly, and took the audience on a delightful rollercoaster of fun and surprises. Fart jokes, a slow-motion fight, entering the stage ‘naked’ and a myriad of silly stunts kept us entertained.

WMMC has a cast of three, with two acrobats and a musician, and was a wonderful hark back to the old school slap stick comedy of Laurel and Hardy, with fun and gags left, right and centre. The two acrobats worked together brilliantly, weaving in and out of rolls and tumbles and balances like a well-worn duet. Their comedic timing was impeccable, pulling off such stunts as a grand slam face punch with a flip out in a manner that you could almost believe was real. There were also some strong adagio balances between the two acrobats, juggling, chair balance feats and comedic bicycle riding, among others.

Most certainly, the younger members of the audience were absolutely enthralled and captivated, with giggles and sounds of amazement to be heard from start to finish. Even the older audience members were taken up with the magic.

Uncomplicated costumes that communicated character well were a part of the whole design – Mozart’s outfit was his standard wig and jacket of the classical period, and his friend wore checked culotte shorts and a white t-shirt with a painted tie and a party hat, hinting at the historical peridot clowns. Her performance style also reflected this genre of clowning, with the occasional ‘concentration face’ or character being dropped for some moments, which was slightly distracting. For the majority of the show, the musician wore a golden baggy onsie, with wings on the back, perhaps hinting at a fairy, or cupid? It was quite adorably comical.

A few key set pieces were on stage the whole time, and multiple props were key players, including use of the spotlight, conductors wands with bunches of flowers or streamers that popped out of them, champagne bottles as juggling tools, and multiple pieces of paper with music notes or score written on them.

WWMC was a wonderful celebration of innocent fun, a laugh a minute, brilliant introduction to circus and performance for young children. It was perfectly pitched in all its elements at a younger audience, from difficulty of tricks and the way they connected, often moving at a fast pace but easy to understand at the same time, to the structure and the way the narrative flowed, to the choice of colour palette and costumes. The comedy was simple but ingeniously witty, and left the audience walking out with a smile, the troubles of the world forgotten for a while.

Wolfgang and his friends should certainly not be missed. They are at the Theatre Royal in Sydney for two more days, and then heading to regional Victoria and Newcastle. Tickets and tour dates can be found at circa.org.au/show/wolfgang.