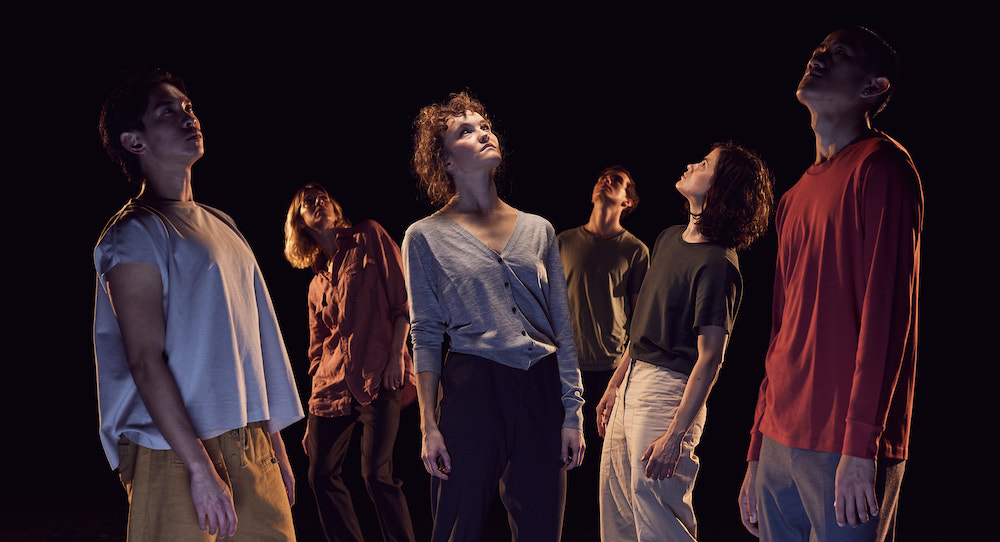 Grey Rhino is the first full scale co-production of award-winning dancer and choreographer duo Charmene Yap and Cass Mortimer Eipper that will premiere in Sydney Festival 2022. This passion project has been three years in the making for these two creative and also life partners.

They have seen how an initial seed of inspiration from Michele Wucker’s TED Talk that explored the ways humans deal with risk and impending threats such as a “highly probable, high-impact threat: something we ought to see coming, like a two-tonne rhinoceros aiming its horn in our direction and preparing to charge.”

For Yap and Mortimer Eipper, this was an exciting metaphor “that immediately sparks questions about the human condition. Why do we deal with things this way? Or don’t deal with things in this way? Is it a sense of greed, or just apathy or fear or the whole mess of human emotions that we as human beings feel when dealing with something that’s so present and so foreboding?”

After sharing this with Yap, the couple undertook a self-funded development work in December 2019, working with independent dancers and other creatives. “Since then, it’s kind of developed and grown; it’s been our project over the years that we’ve just really pushed for it,” Mortimer Eipper says. “We’re lucky that we can finally present the work to an audience.”

Developing the work on this scale has been a challenge (notwithstanding the COVID interruptions) depending primarily on the creative drive of the two founders but also on the generous support of a number independent artists from around the independent dance community, including Billy Keohavong, Jana Castillo and Richard Cilli.

That’s why they are grateful for the support of Performing Lines, an independent production team that agreed to produce Grey Rhino for its opening season. For Yap, this really allowed them to focus on crafting the performance with the assembled team and not have to worry too much about the logistical and organisational aspect of the show.

Dance Informa was invited to observe parts of Grey Rhino’s rehearsal prior to its festival debut. The ensemble piece used six dancers moving between states of lethargy and complacency that was then transformed to a state of heightened panic.

Yap and Mortimer Eipper spoke about the desire to create an ethereal stage that was constantly changing and destabilising the dancers’ sense of their fixed reality. Set and lighting design was by renowned stage designer Damien Cooper.

Alyx Dennison, who worked with the co-creators from the beginning, developed the music that inevitably ratchets up the tension in the work with its driving score.

Costume designer Aleisa Jelbart dresses the dancers in everyday clothing that poses questions of apathy, avoidance and action that are inescapable in our daily life.

Mortimer Eipper spoke about the desire to explore contemporary issues of climate change and other existential threats using the universal vocabulary of the body. “How do we experience these looming threats, and, more importantly, how do we respond to them in the real world?” he asks.

Both Yap and Mortimer Eipper are conscious of how ambitious their work is to undertake in the independent sector, which entails constant juggling of schedules, finances, resources and daily practicalities. “It’s exciting that we can bring together so many people from different areas and make this ensemble work, making it work because it’s such a large ensemble,” Mortimer Eipper says. “It is hard to get one timetable for everybody. And also, having shorter periods of rehearsal time. It’s amazing that we have been able to get them all together and really work as a team for periods of time.”

Yap adds, “I don’t think it’s every day you get to see an independent production that has this level of energy and this scale. I think audiences will really enjoy exploring such a profound metaphor in an accessible and challenging way. While we want to challenge the audience to grapple with these issues, we feel the issues are really relatable and prescient.”

Grey Rhino will premiere at Sydney Festival 2022 at Carriageworks from 20 – 23 January. For tickets and more information, visit www.sydneyfestival.org.au/events/grey-rhino.