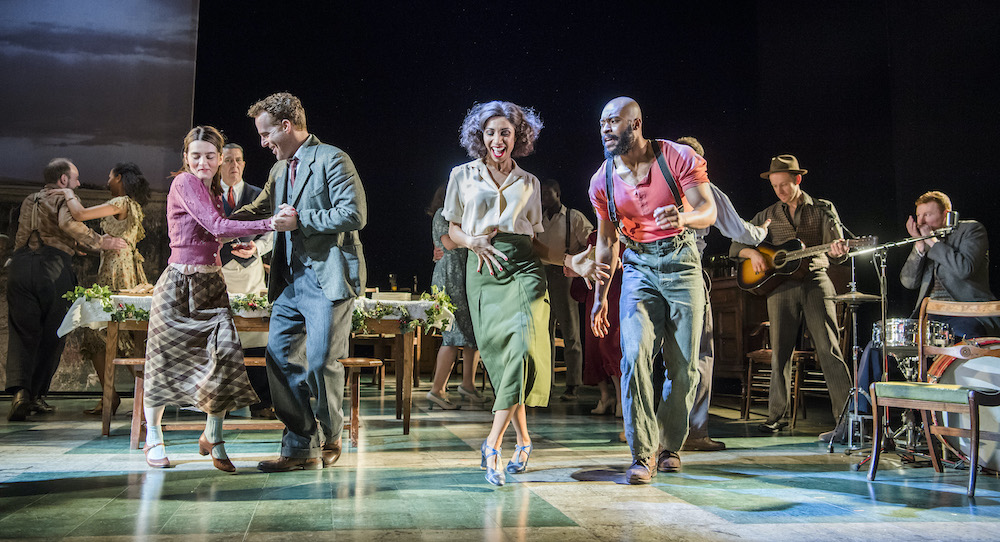 At first, a musical built around Bob Dylan songs sounds like yet another Boomer nostalgia-fest. However, Conor McPherson’s Depression Era drama Girl From The North Country transcends the ‘hits and memories’ playbook in favour of something more challenging. Indeed, the weaving of Dylan, social-realist narrative and the aesthetic of music theatre is one that has not only proved enormously successful but has constantly stretched the creative team charged with bringing it to life.

For Lucy Hind, the show’s choreographer and movement director, the job of drawing seemingly disparate elements together required a dancer’s talent for finding the right point of balance. “It was a wonderful puzzle to unpick the rules of how the music and movement sat within the story,” she recalls. “We didn’t use conventional musical theatre structures or systems. We just went with what felt right. It took a great deal of editing and reworking, but it was very rewarding work. At all times, we aimed for truth.”

That ‘truth’ is as much about Dylanesque themes of class, inequality and justice as it is about artistic values. As Hind explains it, ”I feel like possibly the play is about people in a very difficult situation. I don’t think it’s pointedly political, and people certainly connect with it on a very personal level. Music has the ability to transcend logic, to make us feel the things we can’t often articulate in words. I tried to meet that with my movement.”

From January 2022, Australian audiences will be able to see the results for themselves. Following its New Year debut at the Sydney Festival, Girl From The North Country will travel to Adelaide in late March. With a local cast including multiple Logie winner Lisa McCune and Helpmann winner Peter Carroll, the show’s much-lauded international run looks set to continue. Since its 2017 West End premiere, it has become one of the century’s most awarded productions.

“It’s a curious and rather magical show, unlike anything I’ve ever worked on,” says Hind. “It’s incredibly powerful, and Conor [McPherson] has managed to select so perfectly the right songs for the right moments.”

That same challenge, (right moments), awaited Hind when she took on her role. Having watched archival footage and delved into the dance trends of the 1920s, she located the movement palette more in the social than in typically theatrical or classical lexicons.

“There is a casualness and confidence in social dancing that moves very differently in the body to performed musical theatre choreography, and I wanted to start there,” she reveals. “The way dance was enjoyed on social occasions was so different back then. Everyone learned to dance, people talked while dancing, and not everyone was very good at it. I wanted the moments of social dance in the show to feel truthful, I wanted the choreography to sit in their bodies as memory rather than as choreography they’d learned.”

The process was clearly a joy for the South African-born choreographer. Having previously worked on projects as diverse as Hamlet, Billy Elliot and the London Paralympics opening ceremony, Hind relished the challenge of bringing old dances back to life. “It was such a joy to delve into history to find new shapes and enhance old ones,” she elaborates. “I loved it so much. I read dance manuals from the era and tried to get a good understanding of how dance sat in the socio-political factors of the time. It was also important for me not to add movement for movement’s sake. Often, the numbers are still, and we spent time carefully crafting images, like pieces of art.”

Yet, now, with another re-mount in the wings, she can contemplate a few tweaks. Whereas some like to set and forget, Hind admits to tinkering. “It’s so important that the movement fits the actor, and the way they want to play the character,” she contends. “That said, the big numbers don’t change radically; but I will make adjustments in each production. Some are because I see something I’d like to add, and some because the actors make wonderful suggestions.”

However, because the dance elements of Girl From The North Country are rooted in the social tradition, there is an in-built variability. “For instance, there’s a large section at the Thanksgiving party that’s fully improvised by the actors. I take them through many options, teach them the vocabulary and let them perform it live as if they were at a real party. It’s thrilling. It requires a great amount of trust on both parts, but I’ve been lucky to work with exceptional actors who always deliver magical choices.”

Aside from the many production details, the show, like its narrative and soundtrack, cannot be divorced from its broader historical context. Just as the Depression was to the 1930s and Civil Rights and Vietnam to the ‘60s and ‘70s, so, too, the Australian production of Girl From The North Country exists against an encompassing (perhaps era-defining) cultural backdrop.

“I think the show means something new to all of us now that we’ve been through this pandemic,”Hind observes. “It’s been very challenging for our industry, and I think artists have been hit particularly bad. It’s certainly made me question the value of what we do and why we do it.”

As you might expect from a show built around a Bob Dylan playlist, (including “Hurricane,” “Lay Lady Lay” and “Slow Train Coming”), the fractures of inequality are never far below the entertaining surface.

“The characters of the show are at rock bottom and yet, they find moments of joy and connection. They realise what’s important, they experience humanity at its best and worst; and I certainly feel that we’ve experienced that too recently,” Hind adds. “It’s very clear this pandemic has not affected all people in the same way, and the gap between those that have and those that have not has widened greatly. We need to reassess how we offer aid to those who need it, how we value art and how we value life.”

From 1930s Minnesota, via the generational upheaval of the 1960s, to the curious alter-world of coronaviral discord, the key through-line is perhaps just that: value.